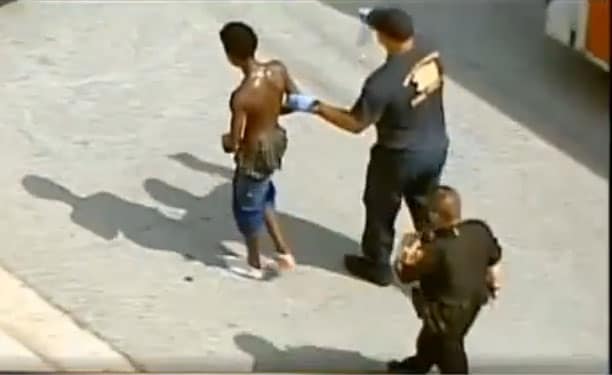 One officer stayed close, ready to catch the young lad’s pants if they fell any farther. (Photo credit: Fox 5, Atlanta)

Two teen boys are in the hospital being treated for gunshot wounds and a third teen is in police custody after the trio broke into a Lithonia, Georgia, home – a home which happened to have an armed young man inside.

The homeowner, who does not wish to be identified, said that the doorbell rang Monday, waking her 21-year-old son who was napping at the time. Neither the mother nor her son answered the door, as they did not recognize the unfamiliar car in the driveway. However, the car was not unknown to neighbors, who had noticed it circling the area a few too many times for comfort.

And moments after ringing the doorbell, the two teen boys were kicking in the back door. When the son found the intruders in his home, he opened fire, hitting them both and sending them running out of the house.

One neighbor, Larry Turner, saw the boys running down the street and called 911.

“They were pretty bad,” Turner told reporters. “One had lacerations down his arm, his shirt was torn. He was losing a lot of blood.”

The two teens, 14- and 15-years-old, didn’t get very far before police arrived. They were transported to a local hospital where they are both in stable condition.

The third teen, who was also 15-years-old, was waiting in the getaway car, which had recently been reported as stolen, in the driveway when the homeowner opened fire on the other two. However, when they took off running, he followed suit, but was also caught a few blocks away.

“You kind of set yourself up for that kind of scenario when you’re entering someone’s home,” neighbor Malcom Davis told Atlanta’s CBS affiliate. “Any time someone is invading your home you have a right to defend yourself and your family. I have no problem with what he did.”

The three teens are facing burglary charges as well as a theft charge for the stolen vehicle.