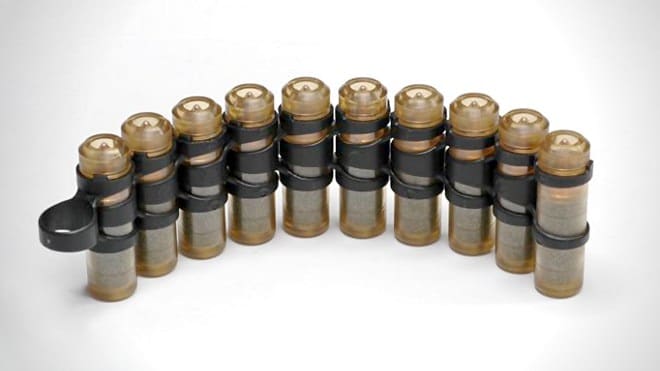 One of the biggest problems facing soldiers in the field is an abundance of technology: rifles, support weapons and their ammo plus all the other equipment soldiers need to carry are physically too much gear to carry for long and stay in full fighting form.

The LSAT (Lightweight Small Arms Technologies) project is one way the Department of Defense wants to take a load off our soldiers’ backs. It is a new light machine gun that feeds a new type of 5.56mm ammo designed by the AAI Corporation, part of Textron Systems, in cooperation with Department of the Navy’s Office of Naval Research in Arlington, Va. and the Joint Service Small Arms Program Office (JSSAP), located at the U.S. Army Armament Research, Development and Engineering Center (ARDEC) at Picatinny Arsenal in New Jersey.

It will do this by first developing lightweight machine guns, and more importantly, lightweight ammo. Called telescoped ammunition, these cased and caseless cartridges do away with the heavy brass case and replace it with a plastic sleeve or nothing at all. They use a solid propellant that is chambered directly into a gun along with a bullet that it is fused to.

By getting rid of traditional cases the ammo is lighter. A lot lighter, about 40 percent the mass of conventional 5.56 NATO linked ammo. It’s also shorter and takes up less volume. A working type of telescoped ammunition will let machine gunners carry more ammo and save weight.

The idea isn’t new but the technology to make these guns work reliable and safely has been a long time in development. Early evaluation suggests that the LSAT may be the first major success, and if so, will make its way into service in no time.

The Department of Defense is counting on it. AAI has been granted a $2.05 million award to continue the development of the LSAT, telescoped ammunition and begin work on 7.62mm variations of both.

“The updated LSAT 5.56mm system will be assessed during the Army’s Dismounted Non-Networked Experiment (DNNE), taking place this month at the Maneuver Battle Lab at Fort Benning, Ga. The caseless ammunition effort will focus on improving propellant and ignition formulations in a 5.56mm configuration. The 7.62mm cased-telescoped cartridge will incorporate mature lightweight ammunition technologies successfully demonstrated in the 5.56mm LSAT cartridge.”

The other hurdles include making sure that the ammo is stable — with caseless LSAT machine guns the propellant is exposed to the elements — and that they don’t overheat. Brass cases act as heatsinks that draw heat out of gun barrels for the time that they stay in contact with the chamber. It does make a difference and early types of telescoped ammo were prone to “cooking off.”

While cook-offs are still a concern (even with traditional machine guns) the current LSAT design uses a two-part barrel with a separate chamber. The barrel is fluted for improved thermals and accuracy, and doesn’t transfer its heat to the chamber. The chamber opens up when feeding and extracting for air-cooling.

The LSAT can also operate in semi-automatic mode and be used like a rifle. “I could see a whole squad carrying it (the LMG),” said Spc. Brandon Smith, who participated in early LSAT trials. “You would own the battlefield.”

If the LSAT continues to show this level of improvement, it could be a fundamental change in the type of weapons militaries use, not to mention, become machine gunners’ new best friend. It will be interesting to see how the 7.62mm variant performs.