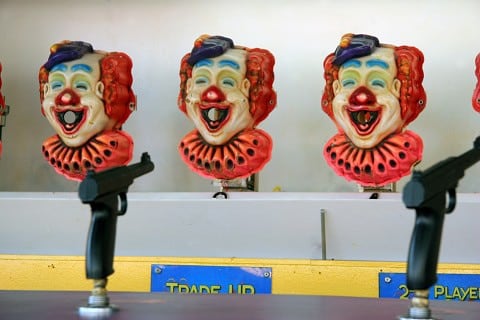 Unconfirmed reports say the man hated those clowns and a water gun just wasn’t gonna do it.

The Indiana State Police asked a man to leave the State Fair Tuesday night when he was spotted walking through the midway carrying what some would consider a small arsenal of guns.

A local news station reported that the man was carrying five guns on the fairgrounds, but police maintain that he was never a threat to anyone. He was simply asked to leave the premises or secure the firearms in his car, to which he gladly and without incident complied.

The man did have a valid handgun license and it was perfectly legal for him to carry the five firearms – just not on State Fair ground property.

According to the fairgrounds policy, “No person in possession of a deadly weapon shall be permitted onto or be permitted to remain on the Fairgrounds; any person properly licensed to carry a firearm must secure the firearm in a locked compartment of his/her vehicle and it shall not be visible to a passerby.” And the policy does include all deadly weapons, not just guns.

Police say that occasionally people – unknowingly of the policy or not – have attempted to bring firearms onto the fairground property.

“We just don’t want the firearms on the fairgrounds,” Indiana State Police 1st Sgt. Brian Olehy explained. “We just politely ask that you return them to the vehicle and lock them safely and make sure they are completely secure and if they don’t want to do that, we just ask them that they leave the fairgrounds for the day.”

Incidentally, Indiana handgun licenses do not restrict the number of firearms that a person is allowed to carry at one time. In addition, the permit does not specifically state either “concealed” or “open” carry, only stating that it is a “License to Carry a Handgun,” thus presumably making open carry legal with a license.

The moral of the story: Be sure to check out your local fairgrounds weapons policy before hitting the midway this fall.

Do you carry more than one gun? What are your thoughts?