The Sheridan Knocabout Pistol: A .22 is not a toy

Today everyone remembers Sheridan as a player in the airgun market, with many of us having cut our teeth on one of their pump .177 guns as youngsters. What not everyone knows, however, is that the company at one point tried to move into the actual firearms market and in the 1950s came up with a 22-rimfire pistol that was well received for what it was: the Knocabout.

Founded by Mr EN Wackerhagen, Racine, Wisconsin-based Sheridan Products started in 1945 with the stated purpose of giving the founder’s son a ‘better airgun than anything then on the market’. Soon their Super Grade, Bluestreak, and Silverstreak models of pneumatic air rifles were the glimmer in the eye for both kids and dads alike. Why such cross-generational interest? The Sheridan products had been designed by a gunsmith, rather than an airgun maker, which gave them the feel of actual rifles. 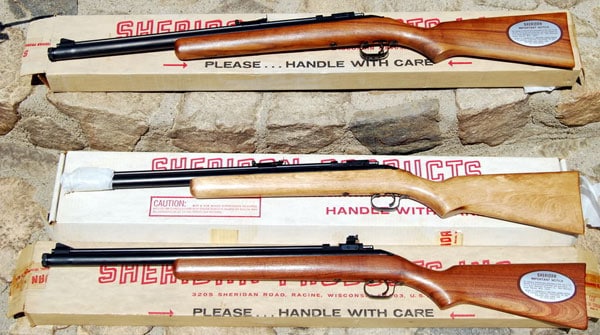 In 1951, the company was looking to expand and decided that a safe bet would be a rimfire pistol. At the time, semi-auto target pistols by Colt, Smith and Wesson, and a new upstart known as Ruger, were popular. The best way to compete with these makers was to offer a ‘beginner’ level pistol, for a good price. 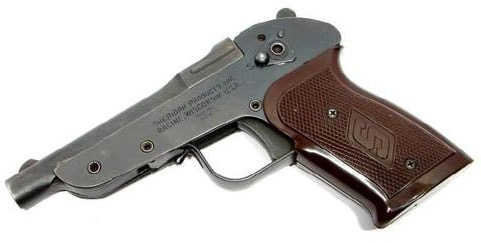 Using a page from their airgun line, Sheridan’s new pistol used sheet metal stampings almost exclusively save for a machined steel barrel that included the chamber. The weapon had no magazine, the barrel simply unlatched and tipped up, much like that of the Beretta Tomcat/Bobcat model 22’s, to load a single round. Once loaded, the user cocked the single action hammer, squeezed the 2# trigger, and fired. When you opened the 5-inch long barrel again, the spent casing ejected and cleared the way for the next round. It could handle shorts, longs, or long rifle 22 rimfire rounds interchangeably. 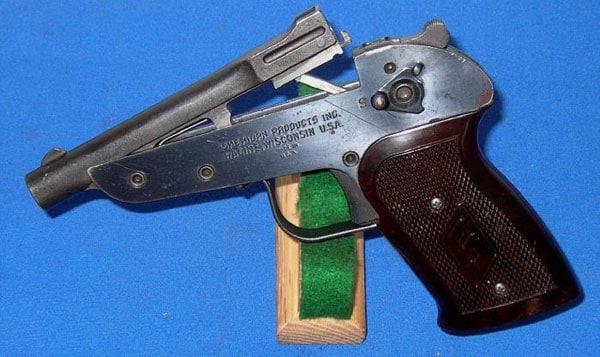 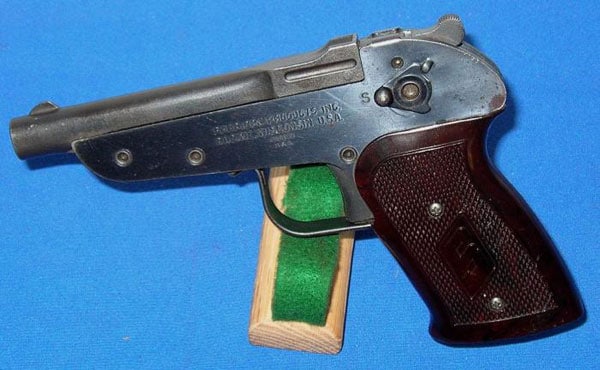 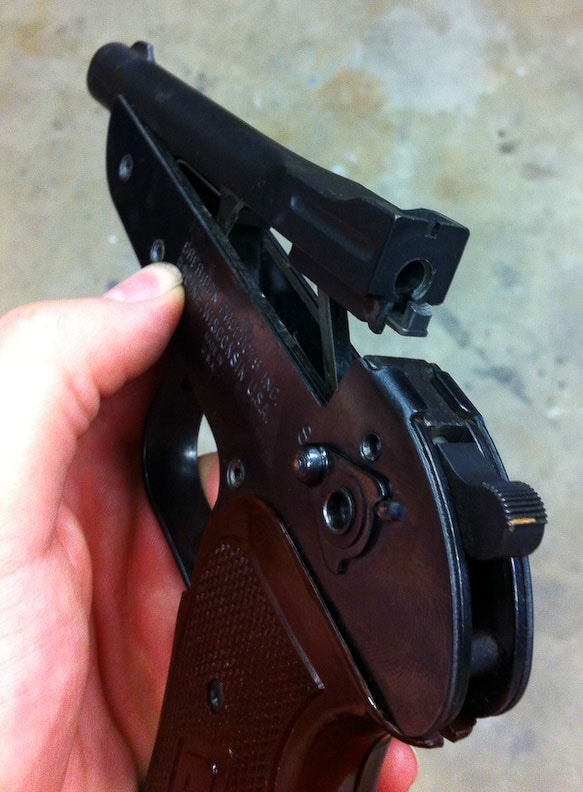 Tip up barrel from the breech side. These guns were nearly impossible to disassemble making cleaning a bit of a chore.

For added insurance, the pistol had an active safety lever on the frame that locked the hammer when engaged. The 24-ounce gun was held together with seven pop rivets like a toy pistol and therefore is almost impossible to field strip. About as close as you can get is removing the plastic grips, titling the barrel up, and going to work with some spray on CLP, dental picks/brushes, and Q-tips. Still, it’s not as if you have to worry about losing pieces.

Here at Guns.com we can’t find out why the gun was spelled Knocabout and not Knockabout, so if you have insight on that, leave it below.

In 1952, the price for a new Ruger Standard pistol was about $37.50, and it was slaying the competition. Therefore Sheridan’s Knocabout, priced at $17.95 ($140 in today’s dollars), was a contender. For $3 more, you could get a deluxe version with a leather holster and cleaning rod. No matter how you spelled it, the bargain guns were reliable, easy to use, and made both a great starter pistol for junior, or a nice safe gun for campers, fishermen, and hunters who were encountering the random snake, taking pot shots at floating debris, or cleaning up a trap line. 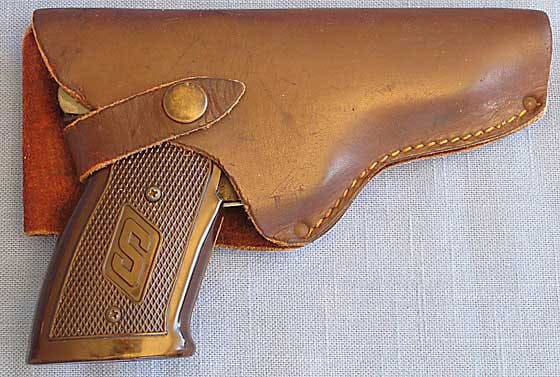 It was very slim and only 6.75-inches long overall, which meant it could be stored or carried with ease. The long barrel meant that it had a nice steady sight radius even if the sights were fixed and by today’s standards, downright miserly. These sights, however, were machined from the barrel steel itself, and impossible to knock loose. Nevertheless, as with everything, all good things eventually must end.

The Knocabout ceased production in 1960, the victim of cheap imported 22 pistols like the Rohm from Germany and FIE from Italy that was both cheaper and offered extra onboard ammunition. Sheridan remained in business with their airgun line until they were bought by the Benjamin Air Rifle Co in 1977 and finally by Crosman in 1992. While Crosman has kept a line of Benjamin-Sheridan air rifles in production, you can rest assured the Knocabout probably will not be resurrected. 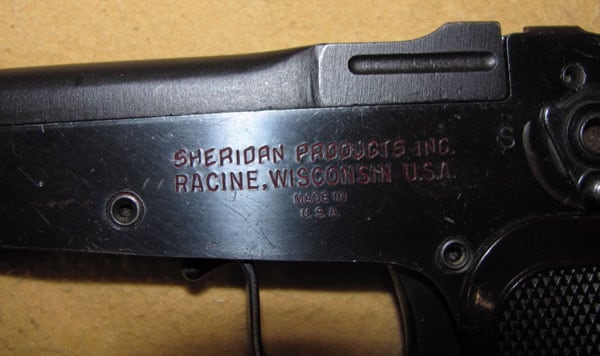 Markings on a Sheridan Knocabout.

These vintage little peashooters are nothing if not durable. Since they have no magazine to lose, no complicated action to break, and fired low-pressure rounds, they have endured. It’s not uncommon to find these guns in antique shops billed as air guns, as the words “Sheridan Products Racine Wisconsin” are prominent along its frame, and honestly, the Knocabout looks more as if it shoots pellets than 22LR. I know of a friend who bought one for $25 at a yard sale from a person who said it was as a ‘1960s Flash Gordon ray gun’, mistaking the ‘S‘ on the grips for a ‘G’. 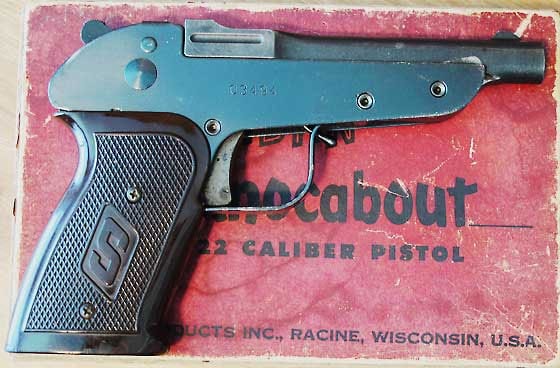 Knocabout with plastic grips and box (the holy Trinity for Sheridan collector’s). Sheridan Knocabout missing grips. This is not uncommon.

While Fjestad states that a Knocabout in 60% condition goes for as little as $85, good luck finding a working example for that price. Since there were only about 11,000 of these sheet metal gatts made, they were never very common and are getting less so each year. Current examples seem to go for around $250-$300 by looking at the past 90 days sales on Gunbroker, Armslist and other online sites. Some sellers ask even more for minty examples with the original orange craft paper box.

Too bad Crosman doesn’t get the lead out and start making these neat little gizmos again.