Florida Sheriffs on 'Stand Your Ground' law: We support it 'as currently written' (VIDEO) 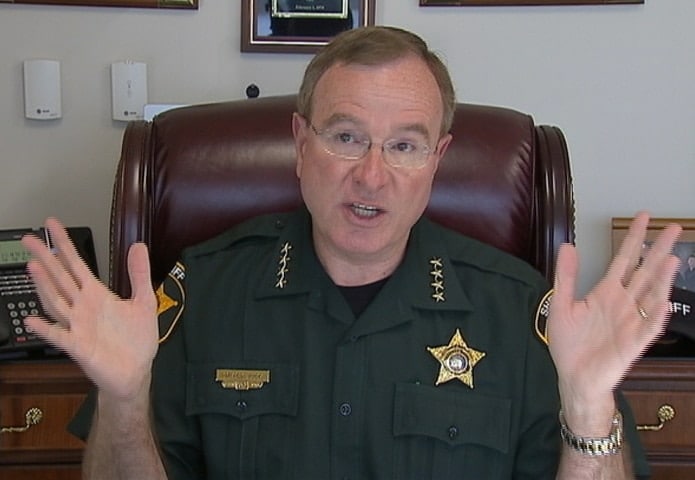 The Florida Sheriffs Association took a stance on the state’s much-discussed ‘Stand Your Ground’ law, openly backing the self-defense law that removes one’s duty to retreat and allows one to use force, including deadly force, in any place he/she has a lawful right to be.

“The Florida Sheriffs confirmed this position by voting unanimously, at the 2013 Florida Sheriffs Association Summer Conference, to support the Stand Your Ground law as it is currently written,” Judd continued.

“Our current judicial system is comprised of multiple checks and balances to ensure fair and equitable application of all laws, including Stand Your Ground,” he concluded.

SYG has taken center stage following the acquittal of neighborhood watch volunteer George Zimmerman in the shooting death of 17-year-old Trayvon Martin.  While SYG was never explicitly mentioned during the trial, the jury was given the text of the law during its deliberations.

Critics of the law and those actively protesting for its removal from the books believe that SYG encourages vigilantism and creates a ‘Kill at will’ or ‘Shoot first’ mentality, a mindset many believe Zimmerman had when he confronted Martin on the night of the shooting.

Consequently, pressure has been placed on lawmakers to once again review the law to see if it needs to be amended — a 19-member bipartisan panel assembled by Gov. Rick Scott examined the law last November and ultimately determined that it was fine as is.

House Speaker Will Weatherford (R-Wesley Chapel), who supports SYG, has said that the state’s Criminal Justice Subcommittee will hold a hearing on the law this fall, but told the News Service of Florida that he was glad that the FSA took a position on SYG, noting that if the sheriffs had made any specific recommendations he would be more inclined to contemplate changing the law.

“I appreciate the input from the Florida Sheriffs Association regarding ‘stand your ground,’ ” Weatherford said in an email Friday. “Getting feedback from Florida’s leaders in law enforcement is critical to the Legislature and will be important as we hold a hearing on the law later this fall.”

The man in charge of conducting the hearing, Rep. Matt Gaetz (R-Fort Walton), said the FSA’s statement was “enlightening,” especially coming from an organization that is typically apolitical.

“I think they recognize that Florida is a safer place when our citizens don’t have a duty to retreat and run,” Gaetz, a proponent of SYG, said.

At the end of the day, it doesn’t look good for SYG critics and protesters.  Not only do Florida Sheriffs favor the law, but overall American voters support SYG, with 53 percent backing the law and 40 percent opposing the law, according to a Quinnipiac University poll.

Given this disparity, many experts believe that efforts to change the law will run aground.

“With these kinds of numbers, it’s unlikely the movement to repeal ‘Stand Your Ground’ will be successful in most of the country,” Peter A. Brown, assistant director of the university’s polling institute, told the Daily Caller.

Indeed.  All signs suggest that ‘Stand Your Ground” will stay as is.  Your thoughts?