Oregon gun owner flips bird to cop, gets pulled over, claims 2A rights were violated

Back in May, Loyd Fery of Stayton, Oregon, was driving his pickup truck down Highway 22 when he noticed a sheriff’s patrol car on the side of the road under a bridge.

For whatever reason, Fery decided to flip off the officer inside the car as he drove past.  It may have been his way of saying, “Hey, Fuck you, I’m not speeding!,” as Fery claims he was driving 44 miles per hour in what is a 50 miles-per-hour zone.

Unsurprisingly, the deputy in the patrol car, Marion County Sheriff’s Deputy Ryan Postlewait, a member of the department’s traffic safety team, pursued Fery and pulled him over. 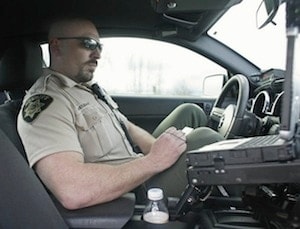 “I drove by the cop going 44 miles per hour. I made an obscene gesture with my hand at the car, and then was pulled over a minute later,” as Fery explained it to the Statesman Journal.

When Postlewait got out of the car and confronted Fery and his wife, who happened to be sitting in the passenger seat, Fery informed Postlewait that he had a concealed firearm in his driver’s side door along with a valid concealed carry permit.

According to Fery, Postlewait then drew his gun, told Fery and his wife to put their hands above their heads.  He then instructed Fery to get out of the car so he could be searched.

Following the incident, in which Fery was ultimately cited for speeding, Fery alleged in a formal complaint with the sheriff’s office that Postlewait’s actions were tantamount to harassment and bullying.

However, the sheriff’s office investigated the matter and found that there was no foul play, that Postlewait’s actions were justified because, as noted in the police report, Postlewait only felt threatened after Fery dropped his firearm to the left side of his body where Postlewait could not see it.

“The deputy wasn’t wrong in every aspect of this situation, but things could have been taken care of in a different manner,” Marion County Undersheriff Troy Clausen told the Statesman Journal. “In the future, we’ll find a better way to handle things like this.” 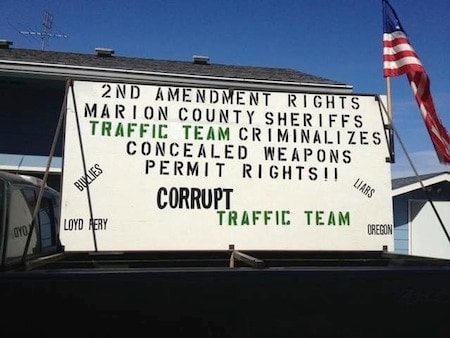 Fery’s sign on his pickup trunk. One could argue that it’s an added blindspot. (Photo credit: Statesman Journal)

Fery paid his $300 speeding ticket.  But is not go to go gently into that good night.  Instead, he wants to warn others about his experiences with Deputy Postlewait.  To do so, he drives around with a sign on the back of his pickup that reads: “2nd Amendment rights Marion County Sheriffs Traffic Team criminalizes concealed weapons permit rights!”

“That cop is a hothead, a bully and a liar,” Fery said. “I want people to see that.”

Asked about how long he plans on leaving the sign up, Fery responded: “I’m going to keep it up for a while.  A lot of people have told me that they like it, that it needs to be seen.”

Undersheriff Clausen seemed fine with Fery’s stunt, noting that the has a First Amendment right to say what he feels.

“I told Loyd that he has every right in the world to put up the sign and drive it around for as long as he wants,” Clausen told the Statesman Journal.

This is obviously a tough situation to dissect as not all the specifics are known.  Yet, one thing is clear: Fery’s an idiot for flipping off the cop.  Sorry.  That’s a stupid decision that will only invite trouble and unwanted attention from law enforcement.

As for the sign, well, that’s arguably stupid as well.  Fery’s essentially putting a bull’s eye on his back.  He’s asking for more trouble.

Was he mistreated?  Maybe.  And if he was, he does have a right to publicize his version of the story and alert others about Postlewait, if he is the hothead that Fery claims he is.  But, I don’t think putting a sign on his truck is the smartest way to go about doing that.  An op-ed in a local paper or publication would be a much more prudent way to voice his grievances.

In any event, what are your thoughts about this situation?