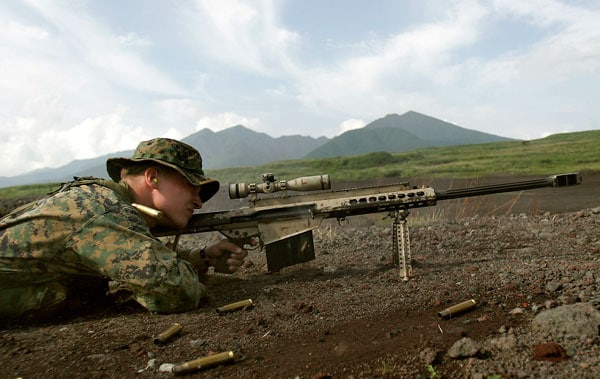 USMC Barrett M82A3 (one rifle known for getting it once and done).

So, we’ve all heard stories of people walking away from a fusillade of bullets unscathed but the truth is this is not often the case. In fact, more often than not, just a single well placed round does the trick. Guns.com looks at five cases where one single shot ended the fight and made history.

Back in the 1570s, firearms were few and far between. The problem was that the things were expensive, unreliable, and needed expert care and attention to perform as expected in the heat of battle.  Soldiers of the time used pikes, swords, and bows far more often than primitive guns, yet one man earned a reputation for figuring these weapons out—a character by the name of James Hamilton of Bothwellhaugh. 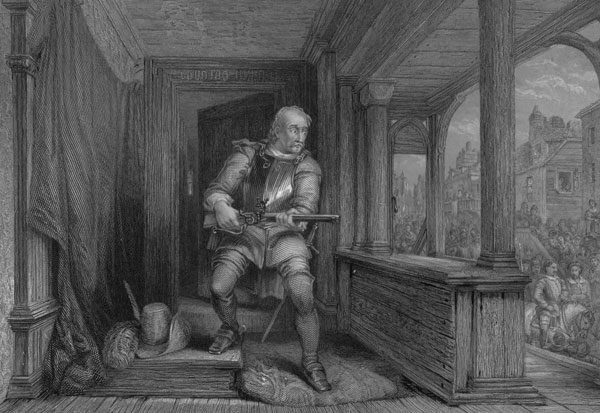 James Stewart assassination at the hands of James Hamilton with an Italian rifle.

Hamilton had a matchlock Italian rifled hunting carbine of just 41-inches in length that he was pretty good with (‘pretty good’ being the ‘distinguished expert’ of the day). Another thing he had was a gripe against a chap named James Stewart, the 1st Earl of Moray and Regent of Scotland, not to be confused with the classic movie actor in It’s a Wonderful Life.

Hamilton hated Stewart so much that he stalked him from town to town for the better part of a year. In each place that they stopped, the two would play some spy vs. spy style game with Hamilton attempting to rub the regent out and the Earl just slipping past the assassin’s fingers. Finally, on January 23, 1570, Stewart rode through Linlithgow, Scotland and into the sights of a waiting Hamilton. 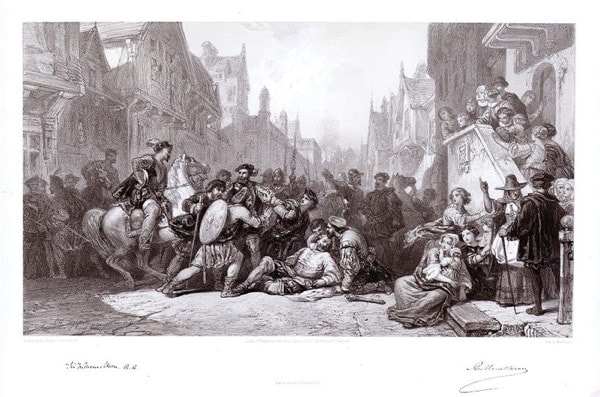 The death of James Stewart.

After padding the floor of his hiding place with pillows to deaden his footfalls and hanging a cloth up as a blind, Hamilton fired his hexagonal barreled black powder muzzleloader off at his armored target traveling below him through town. Not only did the bullet penetrate the Stewart’s armor, it continued through him with enough force to kill the horse of a rider next to him as well.

It was the first time in recorded history that a firearm was used in an assassination.

2.  Sometimes you can hit the elephant

When the Union and Confederate forces clashed at the Battle of Spotsylvania Court House, on May 9, 1864, Major General John Sedgwick was in command of the VI Corps of the US Army. Known simply as Uncle John by his troops, Sedgwick was one of the most experienced officers in the military at the time. The survivor of many combat wounds, he had spent 27 years in the Army, which included no less than four real live shooting wars before the Civil War. 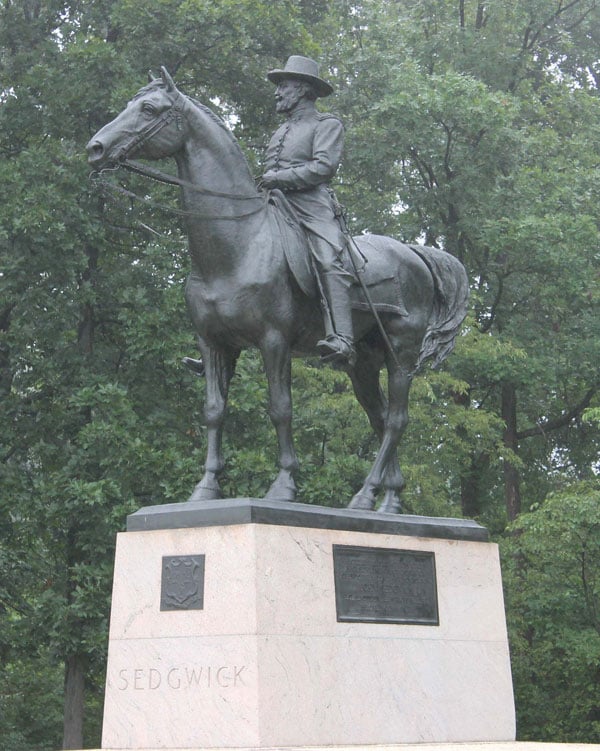 Therefore, he was shocked and ashamed to see his staff officers ducking and hiding from whizzing bullets as he watched the Confederate lines more than 1000-yards away. As a skilled officer, Uncle John knew that the range of typical rifles of the day was far shorter than that distance. When advised to dismount from his horse and get to cover, the good general’s last words were something to the effect of “They couldn’t hit an elephant at this dist-” .

He was wrong and as such was the highest-ranking Union casualty in the Civil War. A single rebel round hit Uncle John just below the eye and he was dead before he hit the ground. A monument stands to him at the Gettysburg National Military Park, still mounted confidently on his stone horse. A second statue at West Point is said to bring cadets at the military academy there good luck on tests if they spin his spurs. They certainly didn’t bring him any.

3.  Must have been a good watch

In July 1865 Missouri, tensions were high. The Civil War had just ended and the Show Me State, a southern border state that never left the Union, had a confusing history—and one that often saw brother fighting against brother.  It was against this backdrop that two gamblers in a Springfield saloon, one named Bill Hickok, the other Davis Tutt, engaged in one of the most epic gunfights in US history. 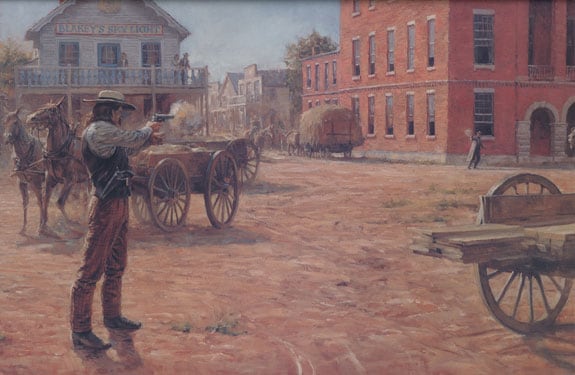 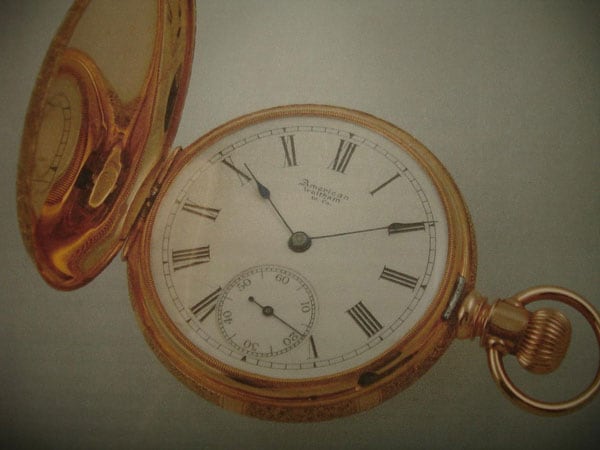 Hickok was a former Union Army scout and Tutt, now a cowboy, a recently retired Confederate veteran. In a previous gambling debt, Hickok lost his prized Waltham Repeater gold pocket watch to Tutt as collateral for a $25 debt. The thing is, when he tried to pay the $25 and retrieve his watch, Tutt increased the debt first to $35 then to $45. Over the course of a couple days, the issue of the watch became the talk of the town and Tutt finally told Hickok he could find him in the middle of the town square with the watch if he still wanted to talk about it. 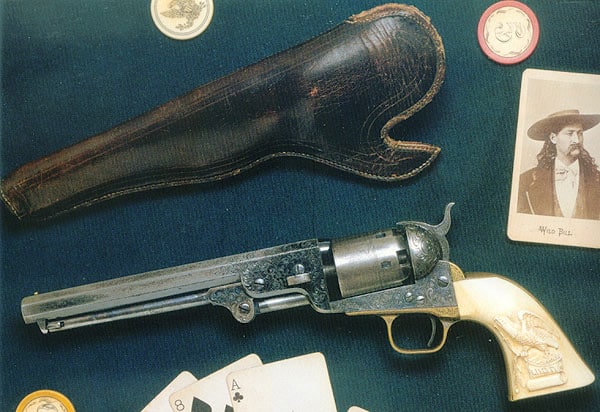 In what became one of the very few confirmed ‘town square quick draws’ in Old West history, Hickok found Tutts standing, as promised around 6pm on July 21, 1865. With the summer sun low in the sky, Bill called out, “Dave, here I am. Don’t you come across here with that watch.”

Both men drew and fired at a range of 75-yards, which is an extreme distance for any handgun. Both men fired nearly at once but Hickok’s Colt Navy .36-caliber cap and ball revolver proved more accurate and dropped Tutt with a single shot center mass. Although tried for murder, Bill beat the wrap and went on to later fame, popularly known as Wild Bill.  Just 11 years after this amazing shot he was killed while playing poker in the Nuttal & Mann’s Saloon in Deadwood, Dakota Territory.

4.  White Feather and the Cobra

Gunnery Sergeant Carlos Hathcock II, of the 1st Marine Divison in Vietnam, was a warrior’s warrior. A quiet professional, still known as one of the best shots in the Corps, he was known among the Viet Cong as Long Tra’ng (White Feather) for the conspicuous feather he wore in his utility hat.

Using a Winchester Model 70 Target rifle in .30-06 with an 8x Unertl target scope, Gunny Hathcock took 93 confirmed kills in the Vietnam conflict. Based at Hill 55, the Marines were frequently the target of a skilled enemy sniper known as the Cobra. Using a Soviet-supplied Mosin 91/30 with a PU-scope—the same type of rifle used by the legions of Red Army snipers on the Eastern Front in WWII—the Cobra specialized at taking pot shots at young marines inside their own wire from the comfort of the jungle. 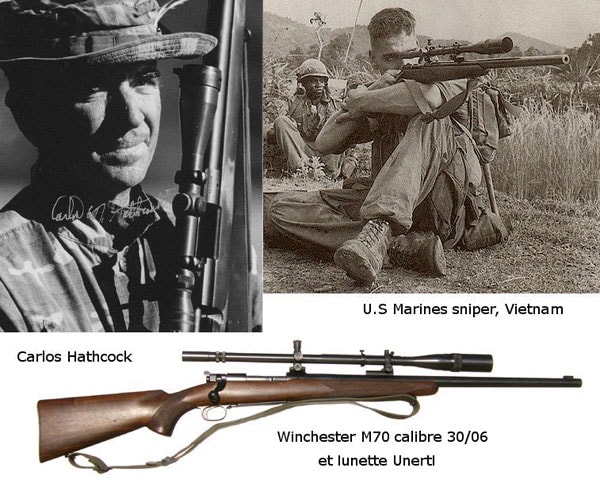 Carlos Hathcock and his tools.

Going with the concept that the best medicine for a sniper is another sniper, Hathcock and his spotter took up the task of eliminating the Cobra.  In an epic all-day stalk, the two marines came dangerously close to being bit by the Cobra. One round even went through the spotter’s canteen. Finally, Hathcock spotted a glint of light far out into the jungle. Zeroing in on the light, he got a shot off in a heartbeat. A round of Lake City Match zipped through the Russian-made scope lens chamber and into the eye socket of the enemy sniper behind it, dropping the Cobra in his tracks. The fact the two scopes were perfectly aligned at the same time lends the obvious conclusion that both men were aiming at each other at the same time, only the Gunny got his shot off first.

This shot has been the subject of much controversy over the years, even being ‘busted’ as improbable by the Discovery Channel. However, Gunny Hathcock, vouched for by John Burke, his spotter, claimed indisputably to have made the shot. With throngs of angry supporters demanding a more thorough re-enactment, the Mythbusters proved the shot was possible. Guess nobody could ask the Cobra for his take on the matter.

On April 9, 2004, Staff Sgt. Steve Reichert, assigned to HHC, 2nd Battalion, 2nd Marine Regiment, was camped out in an awkward position. Lying prone atop an abandoned oil tank near Lutafiyah, Iraq, SSGT Reichert was providing overwatch for a patrol of fellow marines on the ground moving around in Indian country.

Soon he was opening fire on Iraqi machine gun positions with his Barrett M82A3 .50-caliber special application scoped rifle (SASR) as they attempted to ambush the patrol. Taking a page from the book of ‘if you can’t be safe, be deadly,’ Reichert keyed into three Iraqis moving into an elevated position from which they would have a tactical advantage over his fellow marines. 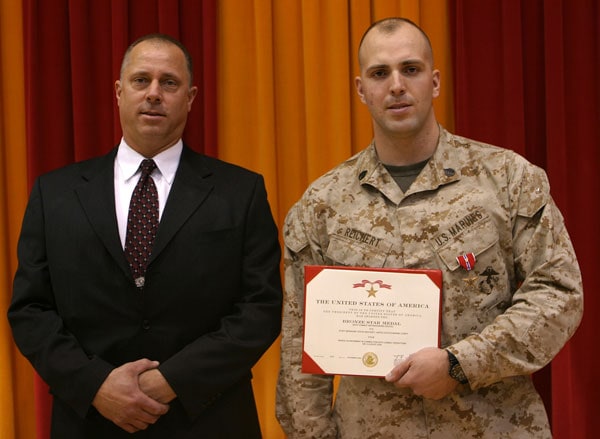 Reichert getting the Bronze star for his 2004 service.

With one aimed shot of .50BMG from over 1600 meters away, Reichert shot through a wall the three insurgents had hidden behind. Illustrating the difference between cover and concealment, all three gunmen toppled over as the anti-material round blew through the wall and showered them with spall and shrapnel.

Leave it to the Marines to try to save ammunition.

Never underestimate the power of a single bullet.