Sixty days, that’s the legally-mandated timetable in which state police have to process a concealed carry application.

Thirty days, that’s the legally-mandated timetable in which state police have to process a concealed carry renewal; permits expire every four years.

Though, due to insufficient manpower, high demand for permits and stringent background check requirements, those processing application requests cannot meet their deadlines, as Lt. Scott Ireland of the Maine State Police explained to Bangor Daily News.

“It simply cannot get met,” explained Ireland. “We’re processing permits that we’ve had for two or three months. They each have to wait in line until they cross the desk.” 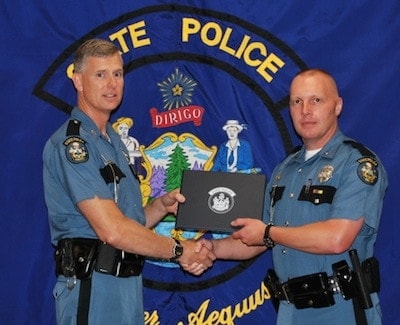 Lt. Scott Ireland (right) when he was promoted to the rank of lieutenant at the State House in Augusta, Maine. Ireland is tasked with overseeing weapons, liquor and gaming licensing.

Currently, state police are backlogged with 4,600 applications, with about 150 more coming in everyday. Ireland told the Bangor Daily News that his department has only one full-time employee dedicated to approving or denying applications and that efforts to hire additional staff have been rejected.

Beyond that Ireland said that the 30- or 60-day timeframe is impossible to meet because “state law requires thorough moral character and mental health background checks, the latter of which takes six weeks to turn around.”

Consequently, the average wait time for a permit is about four months, according to Stephen McCausland, a spokesman for the MSP.

So, clearly, this is a problem — a problem state lawmakers are keenly aware of and are obligated to begin fixing by Jan. 15, 2014, following a law that was passed during the 2013 spring session.

To help ensure that lawmakers have their ducks in a row come winter, Rep. Ricky Long (R-Sherman), the ranking republican on the criminal justice committee, is holding hearings starting in the fall to figure out ways to fix the system.

From Long’s vantage point, one way to improve the situation is to increase licensing fees while simultaneously expanding the duration for which a permit is valid for. As mentioned, permits are only good for four years under current law.

Other suggestions on ways to streamline processing were offered by David Trahan, executive director of the Sportsman’s Alliance of Maine, who plans on taking part in the hearings this fall.

“If the state police cannot do this, there are municipalities that can,” he said. “We can look at other issuing authorities, such as sheriffs, county services, whatever it takes to get the job done.”  It should be noted that state police do not process permits for every resident.  There are several cities and towns that do their own permitting.

Yet, Trahan emphasized that he is not willing to compromise on lengthening the waiting period. According to him, 60 days is plenty. Moreover, it also is important because in some cases people applying for permits are doing so because they feel that their safety is in jeopardy, he added.

“We’re not going to support changing the law just because it’s more convenient for the state police,” he said.

The truth of the matter is that there is an easy solution to this problem: constitutional or permit-less carry. That’s correct, scrap the entire system. For one to carry a concealed firearm, all they should have to do is pass a standard background check and be of age (over 18 or 21, depending on state law).

Vermont, Arizona, Alaska, Wyoming, Arkansas and parts of Idaho and Montana have all legalized constitutional carry and, last time I checked, these states and the permit-less carry regions within these states haven’t descended in chaos and disorder.

Actually, there are grassroots efforts underway to bring constitutional carry to the Pine Tree State. While these pro-gun organizers face an uphill battle in a liberal-leaning state like Maine, there is a possibility that their message takes hold (see video below).

But for Ireland, the issue could be largely solved if he just had a few more workers to lend a hand.

“I feel pretty comfortable that if we had a couple more people, we could address this and get it squared away,” Ireland said. “But will it be in that 30-day window? I don’t see that as remotely possible.”