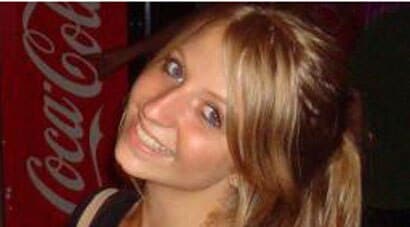 Lauren Spierer is a white female, about 4-feet-11-inches tall, with a slender build. She has blue eyes and blond hair. Anyone with information regarding her whereabouts is asked to call Bloomington Police at 812-339-4477.

In a 2-1 decision, the Indiana Court of Appeals ruled last week that a man who some say has become obsessed with a missing girl will not have his 51 seized firearms returned to him. It’s a case that will likely end up in the Indiana Supreme Court.

The guns were taken from Robert Redington, who has no prior history of mental illness or violence, when Bloomington police found him at the third level of a parking deck last August with the laser of a range finder trained on a bar across the street where Lauren Spierer disappeared a little over a year earlier.

Officers discovered that Redington had two loaded handguns in his pockets as well as a loaded shotgun in the trunk of his car. He had a permit to carry the handguns and they were all completely legal.

When police subsequently questioned Redington, his reactions were enough to make authorities a little more than uncomfortable. In reference to using the range finder, he explained that “he owned a rifle that ‘he had sighted in at that distance of 66 yards’ and that ‘he could shoot accurately at that distance.’”

Redington also admitted that he had a premonition about Spierer’s disappearance before it occurred and that he often “sees spirits and dark entities.”

He told police that he had met Spierer before her vanishing and that he was scoping out the bar that night because “he thought that she would come back and he would see her either through spirit or her physical body.”

The 20-year-old Indiana University student from Edgemont, New York, disappeared under mysterious circumstances in the early morning hours of June 3, 2011 after a long night of partying with friends in Bloomington. Over two years and more than 3,000 tips later, there is still no sign of her. 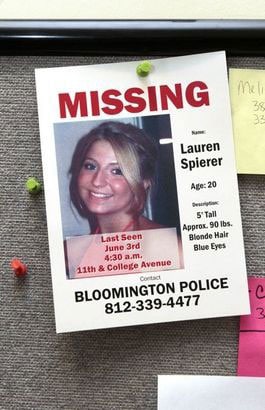 Bloomington Police have received over 3,000 tips, but none have turned up any sign of Lauren. (Photo credit: IndyStar)

Redington, who told police that he was in Bloomington to help search for her, is not suspected to be tied to Spierer’s disappearance in any way, but after police discovered him atop the parking deck, they transported him to a local hospital for a mental evaluation.

Although the psychiatric evaluation indicated that he was neither prone to violence or a danger to himself or others, he was held at the hospital for three days and diagnosed with a moderate personality disorder.

Police obtained a search warrant for Redington’s residence and discovered a rather large collection of guns and seized 48 additional firearms.

The firearms were all seized, but Redington was never arrested.

Monroe Circuit Judge Mary Ellen Diekhoff ruled in September that Redington could not have the firearms back and that they were to stay in police custody.

Redington appealed the decision, but the decision remained intact last week. And the case will likely wind up in the Indiana Supreme Court.

Carmel-based lawyer known for championing Second Amendment rights, Guy A. Relford disagrees with the court’s decision, which was primarily based on a law which was enacted after Indianapolis Metropolitan Police Officer, Jake Laird was shot and killed in 2004 by a mentally unstable man who had his firearms taken by the state, but later returned.

“The law has an appropriate purpose, which is to keep guns out of the hands of people who are dangerous,” Relford explained. “ But I do not believe the evidence showed Mr. Redington was or is dangerous.” 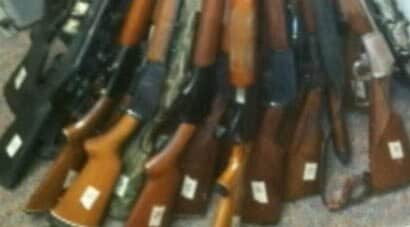 Should Redington be allowed to keep his firearms or is he potentially dangerous? (Photo credit: IndyStar)

Deputy Attorney General Brian Reitz, who represented the state in the case, argued that Redington’s mental state coupled with the amount of firearms proved that he could be a possible threat in the future.

“There’s no reason the state has to wait until there’s actually been violence or until something actually happens before it can act,” Reitz stated.