The HBO series The Newsroom depicted one of its leading characters deceptively editing George Zimmerman’s 9-1-1 phone call, much like NBC News did in March of 2012.

At approximately 7:09 p.m. on Feb. 26, 2012, Zimmerman spotted Trayvon Martin “suspiciously” walking about the Twin Lakes community in Sanford, Florida. He dialed the Sanford police non-emergency number and the following is part of the original recording:

Zimmerman: This guy looks like he’s up to no good. Or he’s on drugs or something. It’s raining and he’s just walking around, looking about.

Dispatcher: OK, and this guy, is he black, white or Hispanic?

Several exchanges later, while Martin was approaching Zimmerman, he said, “He’s got his hand in his waistband and he’s a black male.”

The NBC Nightly News, NBC’s Today show, and the NBC’s network-owned Miami affiliate WTVJ NBC6, had a different take on the 9-1-1 call. Between March 19 and 27, 2012, the network aired segments that misleadingly pieced together parts of the conversation between Zimmerman and the 9-1-1 dispatcher.

On one of several versions of the call that NBC edited, Zimmerman was heard saying, “This guy looks like he’s up to no good or he’s on drugs or something. … He’s got his hand in his waistband, and he’s a black male.”

While in another it sounds like Zimmerman said, “This guy looks like he’s up to no good. He looks black.”

NBC later stated there was “an error made in the production process that we deeply regret,” but never apologized on the air.

What HBO did is provide visual imagery with a convincing script to show audiences their perception of what happened inside the NBC studios when the raw 9-1-1 audio was being prepped for the nation to hear. 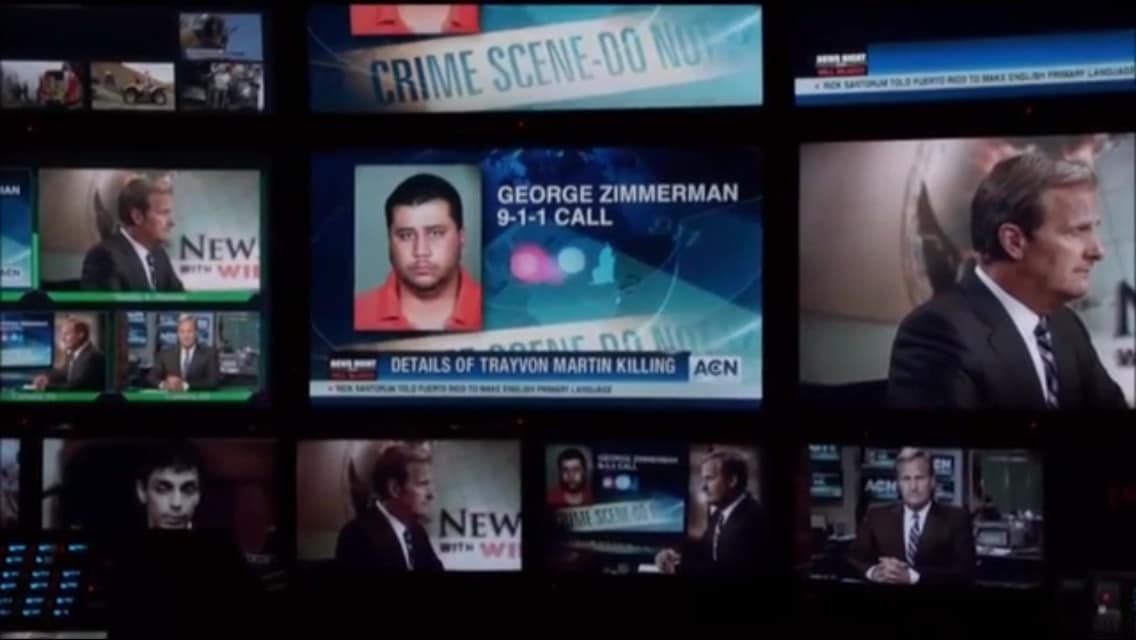 The editing room inside NBC studios as depicted by HBO’s series, “The Newsroom.”

When a news scanner brings the implications of the edited 9-1-1 phone call to associate producer, Maggie Jordan, she runs to tell her boss and executive producer, MacKenzie Morgan the mistake she made.

Jordan, as portrayed by HBO, is emotionally burdened and a problematic drinker, possibly being intoxicated at the time this occurred.

The decision to correct the issue at the end of the program was quickly made, but never carried out.

Jordan vehemently defends her position throughout the dialogue, saying, “I had one pass. I was hearing it for the first time. I had six minutes to cut a five minute piece of audio down to 25 seconds. I should have been listening for it. I know what 9-1-1 calls sound like. I just, I never remotely prepared for this scenario.”

NBC News President Steve Capus, fired Jordan, saying, “an internal network investigation had determined that a producer made the editing error, and that the network’s editorial controls – including senior broadcast producer oversight, script editors and often legal and standards department reviews of sensitive material to be broadcast – simply missed the selective editing of the phone call.”

This move on the part of HBO leaves me wondering if the cable network is attempting to excuse NBC, explain the situation or just entertain their viewers.