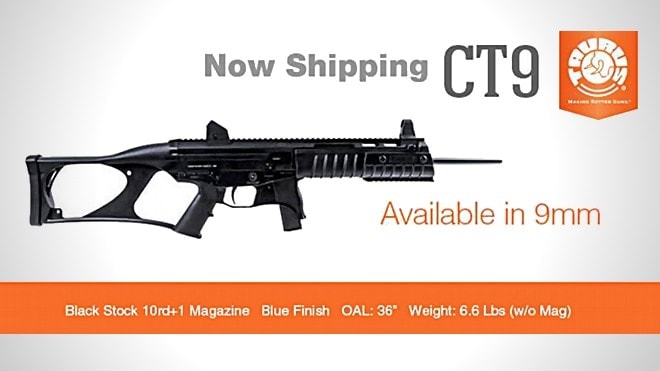 Taurus International is announcing that they are now shipping the CT9, their first pistol-caliber carbine chambered for 9mm. The carbine has been in development for a couple of years and turned a lot of heads when it was first announced.

It’s a slick design with a unique appearance, a modern polymer-and-alloy build with a lot of organic-looking lines side-by-side with plenty of Picatinny rail. Pistol-caliber carbines are in pretty high demand now, with a lot of shooters touting their advantages.

Pistol-caliber carbines are easy to use and inexpensive to shoot compared to most centerfire rifles, and pistol cartridge ballistics show significant improvement with carbine-length barrels over their handgun counterparts.

Made in Brazil, the CT9 has a tactical thumbhole sporterized polymer stock, with the pistol grip modeled on standard AR grips and they come supplied with 10-round magazines. Also, they have simple low-profile rail-mounted fixed, adjustable iron sights.

The 10-round magazine is an indication that these, as imported, are considered “sporting” but contain too many foreign-made parts to legally accept magazines with capacities more than 10 rounds. Foreign-made rifles must have a certain number of American-made parts if they are use higher-capacity magazines and other rifle accessories.

Hopefully CT9 carbines that are brought into the states will be modified by Taurus USA to comply with 922(r) laws, in which case they can be made to accept the 30-round magazines the carbine was intended to use. If not, it will be only a matter of time before the American aftermarket swoops in to manufacture 922(r)-compliance parts.

Even if it takes some time for higher-capacity magazines to come to the CT9 table, this carbine has been highly anticipated and will no doubt be popular. It’s lightweight at just 6.6 pounds and has a very contemporary design that matches an alloy upper receiver with a steel-inset polymer lower. And, in all honesty, there are few 9mm carbines on the market currently.

The arrival of the CT9 is a bit overdue but not unwelcome, and we look forward to handling them in person when they become available. And it sounds like that shouldn’t be for too much longer.

The current market availability of 9mm long guns is so low right now that this carbine’s going to move no matter what people think of the design — which, with its avant-garde looks is no doubt in the eye of the beholder — and is sure to make customers of people who would otherwise pass Taurus over. Provided all goes well, this will be a solid, successful new product.