“Bring enough gun…” It’s a common expression at both ranges and hunting cabins, but can be applied whenever a buddy buys some huge caliber rifle or shotgun and shows it off for the first time. Nevertheless, we decided to point out some of the finer points of those titanic gatts of the safari.

When European and American adventurers came to Africa in the 1800s, they found the continent teeming with exotic wildlife. While there was many of the same types of hunting scenarios as there were back home, (e.g. upland birds, small game, deer etc.), there were also some incredibly dangerous big game animals. The five most fatal of these, called the Big Five, or the Fatal Five, were the African elephant, rhinoceros, leopard, Cape buffalo, and lion. 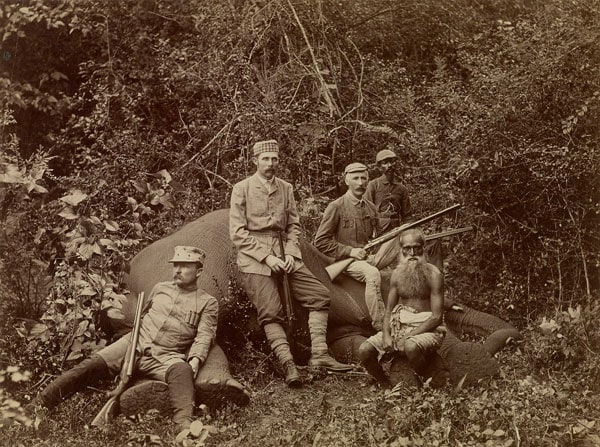 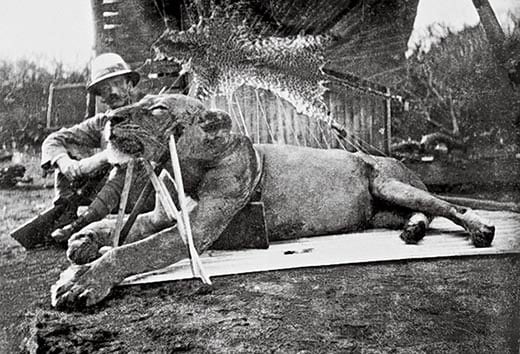 One of the Tsavo lions.

These animals were difficult to hunt, especially on foot and when cornered, they were incredibly dangerous as all could mount attacks rapidly. Immense 13,000-pound elephants could charge, almost totally concealed from tall grass and trample a hunter flat before he could get a shot off. A 2000-pound black rhino’s skin is thick enough to deflect small and even medium caliber rounds. The 200-pound leopard was a master of the stalk, only appearing at night to ambush its prey. The Cape buffalo, stubborn even when wounded, could ambush pursuers and turn the tables in the blink of an eye, earning these unlikely bovines the dubious reputation as one of the most successful killers of humans on the continent. Finally, we all know the lion as “the king of the jungle”. A pair of these creatures, known as the Tsavo Man-Eaters, killed no less than 35 workers along the Kenya-Uganda railway project in 1898. This epic lion v. man battle was depicted in the 1996 film The Ghost and the Darkness.

A gripping scene from Ghost in the Darkness. The novel and film were based off a true story.

With animals like these, your regular off the shelf rounds just did not cut it. 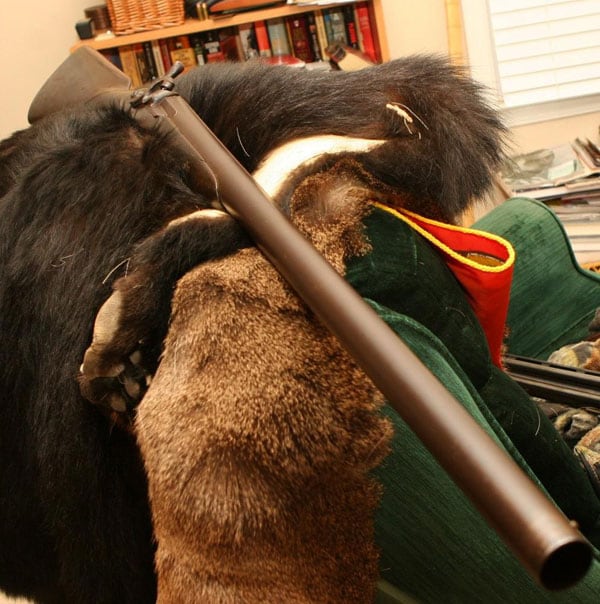 When the first European hunters came to the continent, they did so with huge muzzle loading blackpowder shotguns. The most popular of these were up to 4-gauge (yes, that’s a single digit) monsters that fired quarter pound solid slugs propelled by 500-grains of black powder. When you remember that the Colt Walker, the most powerful handgun until the advent of the .357 Magnum, only held a powder charge of 60-grains of BP, you can get a feel for how big these guns were. While these scatterguns did the trick at extremely close ranges, by the 1900s, things got more advanced. 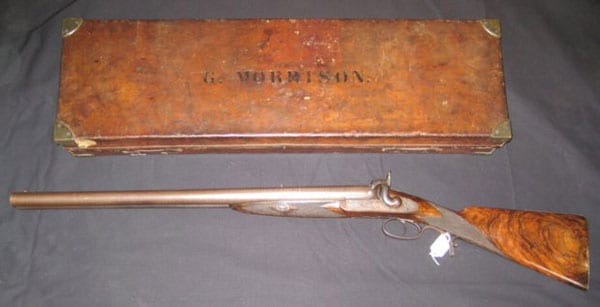 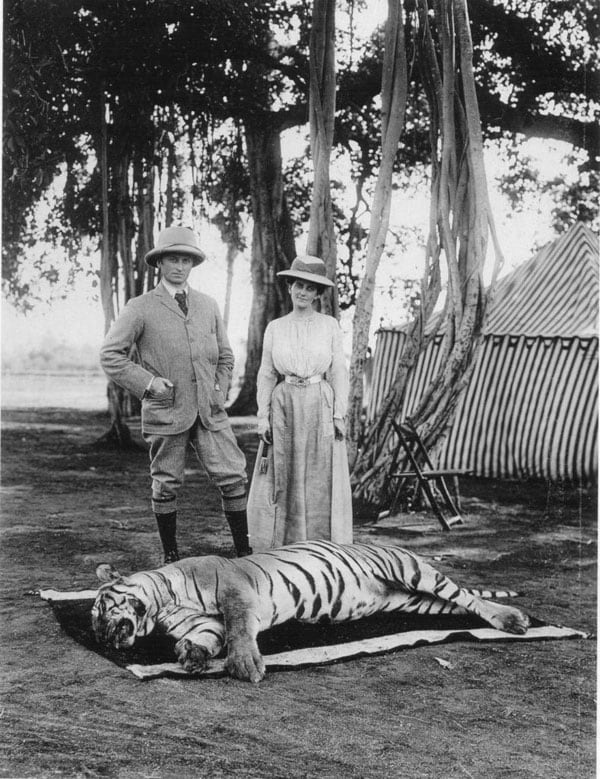 By the 1900s going to Africa or India on safari was the fashionable thing to do. European royalty, authors, and industrialists spent weeks plodding around the wilds of the oldest continent, accompanied by teams of guides, and porters. These guides became the great professional hunters of the 20th century’s golden era of man vs. beast safari action. These men, like Frederick Courteney Selous (thought to be the basis of the mythical extraordinary gentleman Allan Quatermain), Swedish Baron Bror von Blixen-Finecke, and WDM ‘Karamojo’ Bell led talented amateurs like Teddy Roosevelt and Ernest Hemingway into the mouth of the Fatal Five and back out again safely.

The rifles these hunters carried were unlike anything ever seen before. Custom gun makers in England such as Gibbs, Bland and Sons, and Holland and Holland (H&H), as well as the American firm of Griffin and Howe, and the German DW Mauser concern produced extremely well crafted rifles in monstrous calibers.

Gibbs safari rifle. Note the resemblance to the Ruger No. 1 of today.

These included .416 Rigby, .404 Jeffery, and .505 Gibbs. The .505 was a four-inch long cartridge that fired a 525-grain bullet large enough to be classified today as a ‘Destructive Device’ in the US. The most popular of these guns were single-shot falling block Gibbs-Farquharson rifles, a design that Ruger copied and improved upon for their No.1 rifle in the 1960s. These vintage guns today are highly collectable. 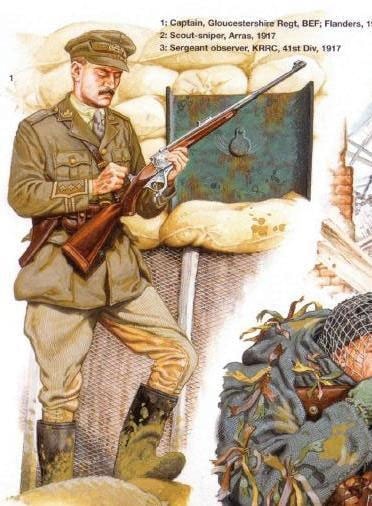 These British big bores saw service in World War 1, used to snipe at passing German Zeppelins as well as the first Teutonic tanks that clattered across No Man’s Land.

Other old school cartridges from the turn of the century include the 9.3x62mm, a European howitzer popular with gentlemen hunters who wandered the mountains of faraway lands in search of the largest bears and cats they could find (all while wearing fine tweed jackets). In America, bison hunters carried the Winchester Model 1895 in .405 Winchester, and this gun made more than a couple guest appearances in Africa.

The end of this era of great safari hunters was the death of Peter Capstick in 1996. Capstick walked in the same footsteps as TR, Hemingway, Selous and others and his book on the subject, “Death in the Long Grass,” is one of the best of its kind. 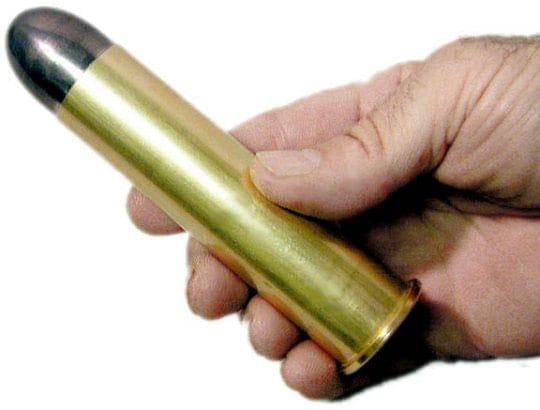 The 600 Nitro Express is just your typical elephant round these days.

The practice of safari hunts today is a dying custom with just a small number of international sportsmen chasing bucket list game and keeping a faint ember of the chase alive. Many of the traditional Fatal Five are off the menu even for the uber-wealthy, such as the endangered black rhino and the protected lion and the African bush elephant. Populations of Cape buffalo and some of the big cats are still open to those with wallets big enough to chase them. As such, animals like wildebeest and eland have been proposed as substitutes and are gaining popularity, although they just don’t have the panache of stalking lions.

The Browning BAR Safari rifle comes in some larger but much more manageable calibers like .338 Win. Mag. which is acceptable on any of the big cats.

The baseline rifle of safari hunters in Africa today starts with the .375 caliber H&H Magnum and moves up from there. In many African countries that still allow hunting of these exotic game animals, this is actually the minimum legal chambering that sportsmen are allowed to bring to the field. The exception to this many places are big cats, which are taken with calibers as small as .300 Win Mag. 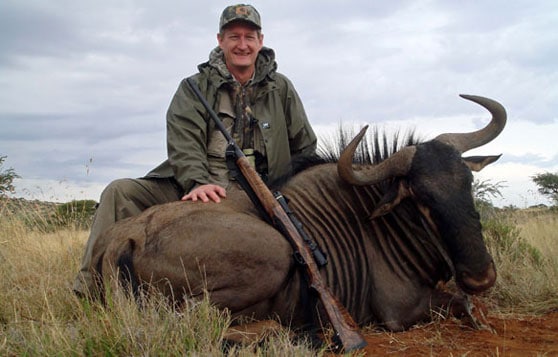 Safari hunter with custom gun of unknown make and wildebeest.

Safari guns are still the realm of custom gun makers who turn out extremely high quality single shot and bolt-action rifles in .500 Nitro, .460 Weathersby Magnum, .700 Nitro and the mind boggling .950 JDJ. Commercial firms like Ruger however have always shown some interest in this market, churning out their $1350 No. 1 Tropical in .375 H&H as a more “entry level” priced rifle. European firms like Mauser, CZ, Sako, and Tikka are still keeping the 100-year old 9.3x62mm alive with semi-affordable bolt-action rifles. 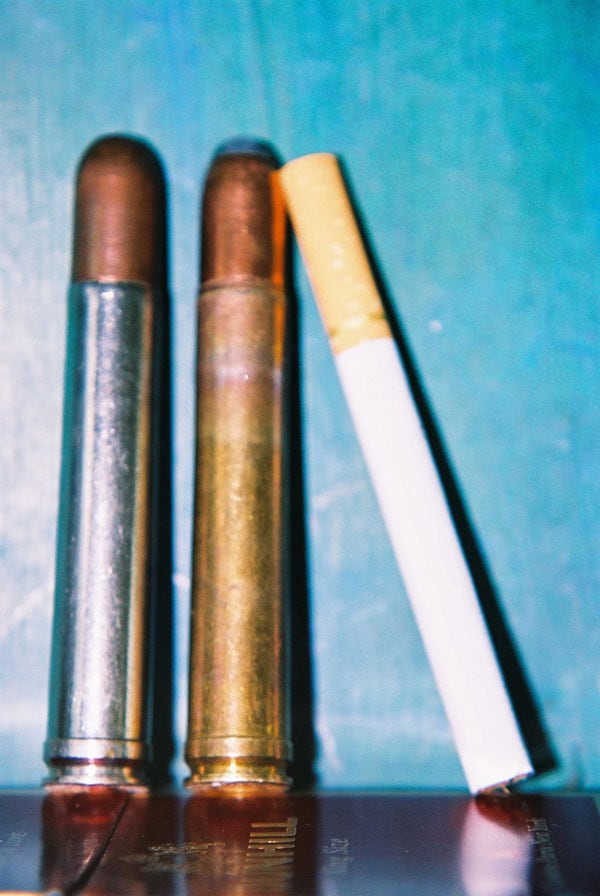 The rounds for these modern day elephant slayers are almost as expensive as the guns made to fire them. It’s not uncommon for these cigar-sized cartridges to run $10 a pop in the case of the moderately priced .416 Rigsby to well over $100 a round for the hard to find .577 Tyrannosaur. Made in 1993, the four inch-long .577 T-rex generates over 10,000 ft. lbs of energy by pushing a 750-grain monolithic solid round out of its 75mm long case.

Besides the cost and the limitation of game, today is just not the 1900s and budding Fatal Five hunters themselves have become the quarry of environmentalists. When Go Daddy CEO Bob Parsons took down an elephant with the blessing of the local government, PETA and the media had a field day.

Increasingly and ironically, since the veldt of Africa is off limits, Western big game hunters have switched back from the deserts and jungle to the forests and mountains of North America. Here, giant Alaskan brown bear, mountain lions, wolves, and black bear have replaced the legendary safari animals of old. With these creatures, you still have to bring enough gun, but firearms chambered in the lighter .338 and .300 Wby Mag made by domestic companies are better suited than the artillery pieces of yesteryear.

And you don’t have to pay a porter to tote your ammo for you.

The 700 nitro express in a 3 min blooper reel of sorts.  By the way, 700 Nitro is $425 for five shots, making this clip almost as expensive as the “Lone Ranger” but twice as entertaining.