Florida homeowner shoots intruder, who turns out to be his neighbor (VIDEO) 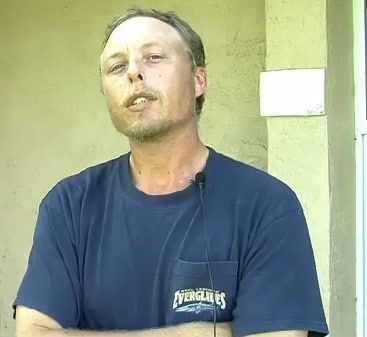 Mike, the homeowner, said his actions were sound because he was in fear for his and his family’s lives. (Photo credit: ABC 7, Fort Myers)

A Florida homeowner shot an intruder who he found in his home early Saturday morning. Only that intruder turned out to be his neighbor and although police believe he was drunk, his intentions weren’t entirely clear.

A local ABC affiliate reported that at about 2 a.m. Mike Davis heard loud banging and his dogs barking. He grabbed his gun and when he came out of his bedroom he saw a dark silhouette of a man standing in his kitchen.

Davis explained that it was dark and he was groggy from being asleep, but he told the intruder to stop and he did not comply. When the intruder continued to come towards Mike, he fired two shots and struck him.

“I don’t care how many people say firearms kill people,” Davis told reporters. “Firearms save lives. And in the situation that happened here in my house tonight, that firearm saved my life,” he said.

However, when deputies arrived they discovered that the intruder was 25-year-old Cody Miller, who lives across the street, but Davis didn’t know that when he fired the shots. All he knew is that there was someone in his house who didn’t belong there and he was continuing to advance toward Davis.

Police stated that Miller was intoxicated, but the fact that he had kicked in the door leaves his intentions questionable.

Though criminal defense attorney Scott Moorey says there is no question.

“Cut and dry self-defense — no if’s, ands or butts,” he said. “The Castle Doctrine allows an individual who is in their own home to use deadly force if someone is in their home and they feel threatened.”

However, friends and family of Miller, who has no criminal history, say that it was an honest mistake after a long night of drinking, that he is harmless and that this was a bad thing that happened to a good person.

“I couldn’t put two and two together it was just — he’s a great guy. Everyone that knows him knows he’s just an awesome guy, wouldn’t harm anyone, wouldn’t do anything ill towards anyone,” Miller’s roommate, Nich Olaswobrock said. “It was just a messed up circumstance, where I can’t tell you what was going through his head.”

Davis told reporters that although he does feel bad for what happened to Miller, he has no remorse for what he did.

“When you enter my home, you’re taking your life into your hands because now you’re putting myself and my family in jeopardy,” he said.

Miller was shot in the chest and remains on a ventilator in critical condition.

Investigators maintain that it was a clear case of self-defense and no charges are expected to be filed against Davis.