It may seem counterintuitive but according to a recent study published by the Journal of American Medicine the increase in military suicides is not tied to deployment stress or combat exposure.

Instead, the study, which cross-referenced data from the National Death Index with the Department of Defense Medical Mortality Registry, suggests that mental health disorders, including depression, bi-polar disorder and alcohol abuse play a prominent role in military suicides, just as they do in civilian suicides.

Researchers examined 83 suicides that occurred between 2001 and 2008 and found that 58 percent percent had never been deployed to a war zone or theater of combat.

“The findings from this study are not consistent with the assumption that specific deployment-related characteristics, such as length of deployment, number of deployments, or combat experiences, are directly associated with increased suicide risk,” the authors, based at the Naval Health Research Center in San Diego, wrote.

“Instead, the risk factors associated with suicide in this military population are consistent with civilian populations, including male sex and mental disorders,” they continued.  Male service members are twice as likely to commit suicide when compared to their female peers.

Some medical experts believe that there is a silver lining in these findings in that there are ways to screen for and treat individuals who struggle with depression and substance abuse, whereas if suicide was strictly combat-related, it would be difficult to address the problem because soldiers are ultimately needed on the battlefield.

“The major modifiable mental health antecedents of military suicides — mood disorders and alcohol misuse — are mental disorders for which effective treatments exist,” wrote Dr. Charles Engel of the Uniformed Services University of the Health Sciences in Bethesda., Md., in an editorial.

Meanwhile, critics of the study suggest that important information was omitted, such as data beyond 2008  that examines the long term effects of traumatic brain injuries and the fact that the databases used do not capture all suicides because on occasion family members will not publish the real cause of death.

“Why would the authors repeatedly insist that there is no association between combat and suicide?” asked Dr. Stephen N. Xenakis, a psychiatrist and a retired Army Brigadier General, who spoke to the New York Times. “The careful analysis of bad data generates poor evidence.” 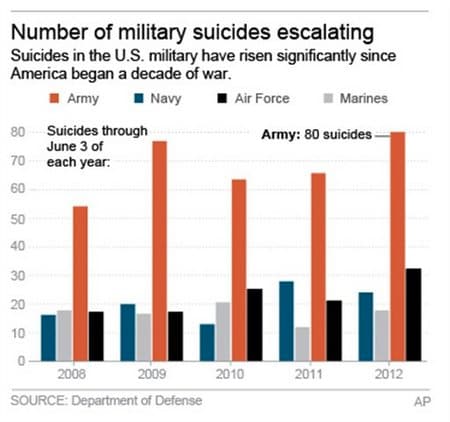 Suicide rates across the military since 2008.

However, head researcher of the study Cynthia Leard Mann told the NY Times that her team plans to update the study through 2012 when the data becomes available, but in the meantime expressed confidence that the new data will only reaffirm what they’ve already discovered.

“The current study includes information from when we saw a sharp increase in suicides, between 2005 and 2008,” Leard Mann said. “So it’s demonstrating that even in that period, we don’t see association with deployment.”

One theory to explain why suicide rates started to increase in 2005 is that the Army relaxed its recruitment and retention standards in 2004, allowing more at-risk soldiers to enlist.  As noted in a Stars and Stripes article, a 2010 Army report said that more than half of 80,403 waivers granted were to people with a history of drug or alcohol abuse, or crimes, and offenses that once had meant discharge were overlooked.

While the debate will continue over the factors influencing military suicide, one thing everyone can agree on is that it’s a huge problem that only appears to be getting worse.  In 2012, military suicides hit a record high with 349, up from 301 in 2011.

To help solve this crisis there are certain things we know work to save lives, as John Draper, the director of the National Suicide Prevention Lifeline, noted a recent NY Times op-ed:

We know that high-quality mental health care and crisis intervention through hot lines like the National Suicide Prevention Lifeline and the Veterans Crisis Line reduce emotional distress and suicidal thinking.

We also know that suicide rates correlate with poverty and unemployment, so those employers across the country who are hiring veterans are also doing their part to bring down the suicide rate.

We may not know why the veteran suicide rate is so high, but if our community comes together to meet the challenge, we can bring it down.