A Philippine patrol boat unlawfully opened fire on and killed a Taiwanese fisherman off the coast of Batanes in Manila. The Department of Justice has requested the prosecution of the Philippine Coast Guard personnel after the fatal shooting was brought to light. 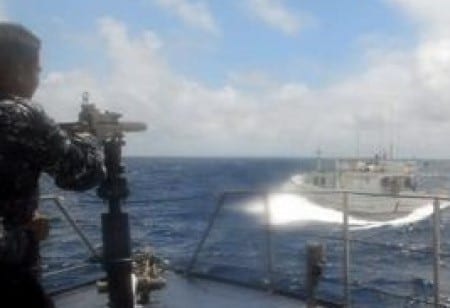 The PCG used this mounted automatic machine gun to shoot at the fleeing Taiwanese fishing boat.

The PCG crew has been accused of fatally shooting 65-year-old Hung Shih-cheng in Balintang Channel on May 9, 2013. One of the Filipino crewmen captured video of the entire incident, which was later released by the Philippines’ National Bureau of Investigation.

The video shows the coastguard officers firing M-14 rifles and a mounted automatic machine gun at a fleeing Taiwanese fishing vessel. At one point, a member of the coastguard shoots his M-14 at the boat and is then seen laughing after the rifle fails to fire. 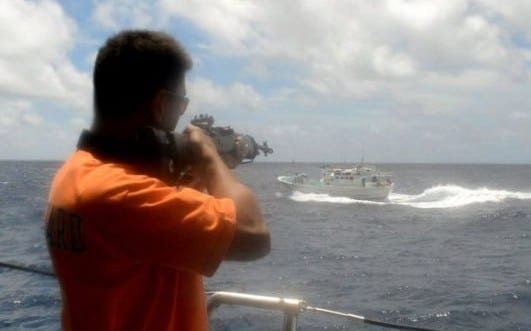 One of the PCG crewman fired multiple shots from an M-14, laughing when the weapon failed to fire.

It was claimed by the PCG that the craft was illegally fishing and they were forced to fire upon it after the fisherman attempted to ram the larger coast guard patrol craft. However, evidence may suggest otherwise.

De la Cruz and Bendo along with SN1 Marvin Ramirex and LTJG Martin Bernable have been charged with obstruction of justice for submitting tampered evidence to the NBI, having “spliced” portions of the video footage together. The four also falsely reported the amount of rounds expended during the shooting.

In total, 108 spent shell casings were found, 45 of which struck the Taiwanese fishing boat.

The NBI reported the indiscriminate firing of high-powered rifles showed “a common design to disregard the rules of engagement.”

“Any sensible and reasonable person is capable of discerning at that point that indiscriminate firing at a small fishing vessel will, in all likelihood, inevitably result not only in the disabling of the watercraft, but also in bodily harm or death,” the NBI stated.

The PCG were also found to be in violation of the rules of engagement when they shot at the Taiwanese vessel, which posed “no categorical proof that it [the fishing boat] posed an imminent or grave threat to the lives of those on board the Philippine patrol craft.”

The Taiwanese fisherman was with his son and two others when the PCG engaged them and opened fire, leading to his death.