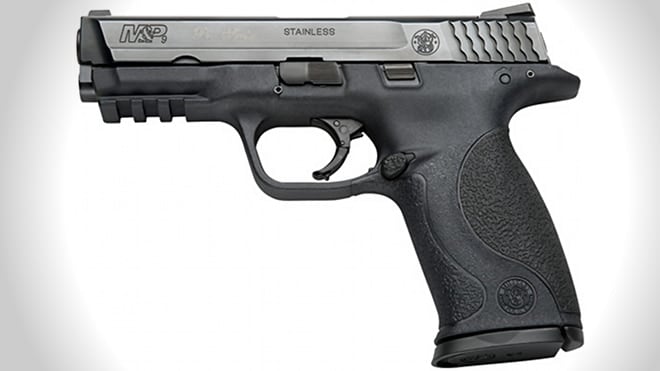 Magazine safeties, also known as magazine disconnects, prevent a firearm from firing if there’s no magazine inserted, but they often put tension on trigger components, making them heavier or stagy. They’re also newer-model M&Ps which have better factory triggers than models from previous generations.

“It was an even trade. Isn’t that wonderful?” said police spokeswoman Barbara Miller to the Gazette.

The new guns are falling into the department’s replacement cycle, as the Springs’ police are issued every five to eight years and the M&P pistols they are replacing are now six years old. The guns will be surplussed for resale on the consumer market.

Smith & Wesson developed new trigger components for their M&P Shield subcompact concealed-carry pistol, and has since been rolling out the new triggers across the board for all their M&P pistols.

“The new 9mm M&P without the magazine disconnect safety allows us to achieve a smoother trigger pull,”said Lt. Mike Velasquez, police training director. The officers will get some range time with the guns before they’re issued.

The upgrade is part of a growing movement to supply officers with easier-to-use handguns, including a trend towards 9mm handguns over larger, harsher-recoiling calibers like .40 S&W.

Officers in Sioux Falls, S.D. are an example of yet another department making that exact switch. While they carry Glocks, not M&P pistols, they’re trading in their .40 caliber handguns for 9mm pistols, citing lighter recoil and greater capacity as the reasons for the change.

The Sioux Falls police will also be getting their guns at no cost to their department, thanks in part to a federal grant for new equipment. They will be selling their 17-year-old pistols back to Glock and buying new ones for just $409.

Part of this is because of improved bullet technology; a modern 9mm bullet is often as effective as other larger calibers, particularly when taking faster follow-up shots into account.

“When it comes to determining what kind of guns we carry, accuracy is by far the most important factor,” said Police Chief Doug Barthel to the Rapid City Journal. “We’d much rather have them put more rounds on target than have something with a little bigger caliber but not necessarily hit on time. It’s safer for the public in an unlikely shooting event.”

“It seems .40 S&W continues to fall out of favor with more people coming to the realization the 9mm offers higher capacity, lower recoil, lower training costs and solid terminal ballistics when compared to the .40 S&W,” explains the Bang Switch.

Police departments starting switching to .40 S&W pistols in the ’90s; it was simply a harder-hitting chambering. Today the effectiveness of the two cartridges is similar, and subsequently many departments across the country are beginning to favor 9mm.

Another contributing factor in the wide-spread adoption of .40 S&W pistols is thought by many to be political. Following the passage of the Assault Weapons Ban in 1994, many police departments were offered incentives by gun manufacturers to switch to the newer cartridge, as long as they sold or traded their old 9mms back to the manufacturer.

Manufacturers were then able to re-sell the recently-banned magazines on the open market, as they were considered “pre-ban” magazines.

“The AWB allowed gun manufacturers to buy back previously issued law enforcement magazines and resell them on the commercial market,” explains Todd G. over at Pistol-Training.com. That made all those used, abused, high capacity magazines worth their weight in gold. So manufacturers went to agencies and offered to trade them, at no cost, new & improved big-caliber guns for their wimpy little 9mms. The agency got a new gun that fit in its current holsters, replacing old and sometimes completely worn out guns.”

That being said, .40 S&W is still favored by much of the law enforcement community, at all levels of government. The debate over which caliber is better is slated to rage on for the foreseeable future.