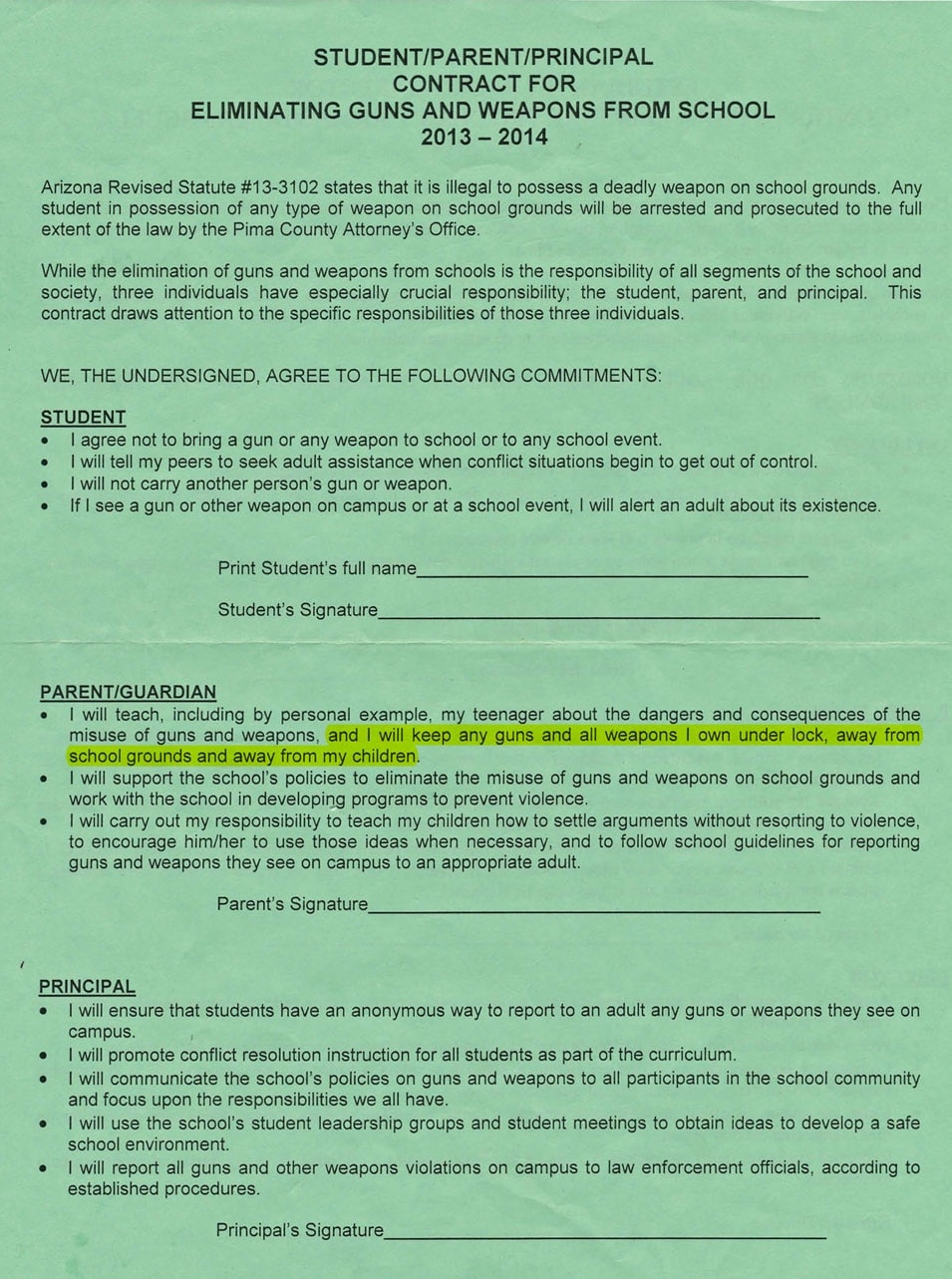 Flowing Wells Unified School District in Tucson, Arizona, is requesting that parents, students and administrators sign a gun safety contract called the “Student/Parent/Principal Contract For Eliminating Guns and Weapons at School” that asks parents to, among other things, keep their firearms locked away.

According to the contract, a parent/guardian must pledge to “teach, including by personal example, my teenager about the dangers and consequences of the misuse of guns and weapons and I will keep any guns and all weapons under lock and away from school grounds and away from my children.”

So far, at least two parents have complained about the contract.  One parent, a father, initially signed the contract but asked to have it back to give the matter some additional consideration.  As for the other parent, it’s unclear what his/her beef was.

Gun Owners of Arizona, a pro-Second Amendment organization based in Tucson, is currently asking parents to let them know “if your child’s school asked you to sign a document with a ‘Lock Up Your Safety’ provision or any other anti-RKBA provision.”

The concern is that this is an overreach, an abuse of authority by the school district.  Arizona is definitely a pro-gun state with a deep and profound respect for the Second Amendment; it’s one of five states that permits constitutional or permit-less carry.

So, unsurprisingly, a contract instructing parents to “lock up” their firearms in a state that values one’s self-defense rights outside the home was bound to raise some eyebrows.

Yet, for what it’s worth, the contract really has no teeth.  School administrators have admitted that there is no legal or disciplinary recourse if a parent refuses to sign it.  Moreover, it’s also a sort of relic, a surviving formality from a previous administration as one alum pointed out on the GOA Facebook page.

“This is not new for the Flowing Wells schools,” noted Tina Lowery. I went to FW in the 70s and my children attended in the late 80s and thru the 90s.”

“This started in the early 90s but it was only the part about locking up your weapon and making you sign stating that you would do that,” she explained. “I would cross it out and write in ‘NO I WILL NOT’ and then I would sign it! I did that every single year and they never caught it or just did not want to say anything to me about it.”

Her analysis seems to be quite accurate as Flowing Wells District superintendent, Dr. David Baker, confirmed that there will be no consequences for refusing to sign the contract, that the contract had been around prior to his appointment as superintendent and that it is not their intention to govern behavior at home.

In an interview with the Arizona Daily Independent, Dr. Baker said he would do a review of the registration materials and work to clarify ambiguities in the paperwork.

“It is important that people understand the district in context,” Baker said. “We have great parents and kids.”  He added that he has no reason to believe that the district’s parents need to be taught how to raise their children.

He also made it a point to note that the District has its own junior rifle team and an ROTC program with 150 members.

Still, some of the wording on the contract will give some parents reason to pause.  In particular, a portion of it which requests that parents “carry out my responsibility to teach my children how to settle arguments without resorting to violence and to encourage him/her to use those ideas when necessary, and to follow school guidelines for reporting guns and weapons they see on campus to an appropriate adult.”

There is no antecedent to “those ideas,” which leaves one to speculate about what exactly the school is getting at.

Though, Dr. Baker addressed this concern by saying that the point of the contract is simply to remind everyone that guns do not belong on campus.