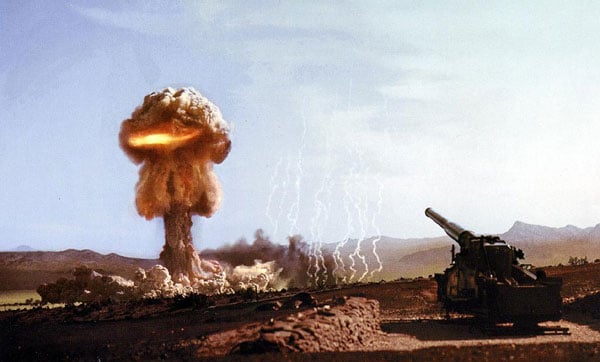 Remember as a kid when you’d play ‘rock, paper, scissors’ and then some Smart aleck would end the game by throwing a ‘nuclear bomb!’? Well that’s kinda what the US Army did in the 1950s when they first rolled out the M65 artillery piece—better known as Atomic Annie. 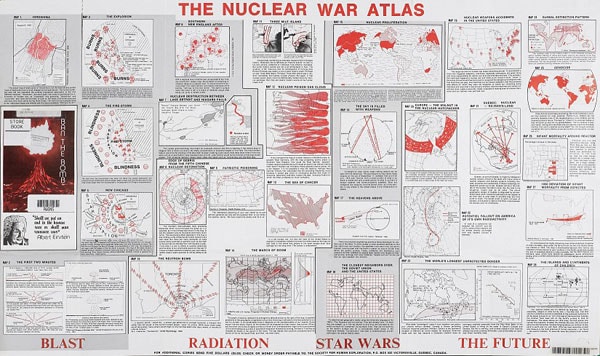 Even if you didn’t make A’s in your junior high history class, you likely still know that World War 2’s final chapter came after the United States dropped an atomic bomb on Japan, twice. But even after this devastating display of military might brought an end to the most immediate hostilities, the US found soon herself headed towards a forty year long Cold War. This new icy conflict pitted the enormous military machine of the Soviet Union and her allies against US-led NATO powers. The US and her allies were outnumbered on the ground–guarding the border between these two bruisers were up to 50,000 Soviet tanks, the living embodiment of the Iron Curtain. 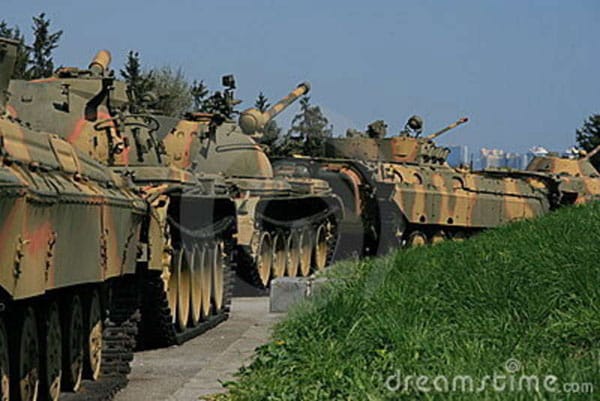 What was needed, as had been needed not but a decade before, was a secret weapon to even the odds.

The concept of a nuclear artillery shell enraptured the Army brass in the late 1940s. The thing was, atomic weapons were large beasts, so large in fact that the only guns that could lob one looked like something you find acrobats using at the circus. 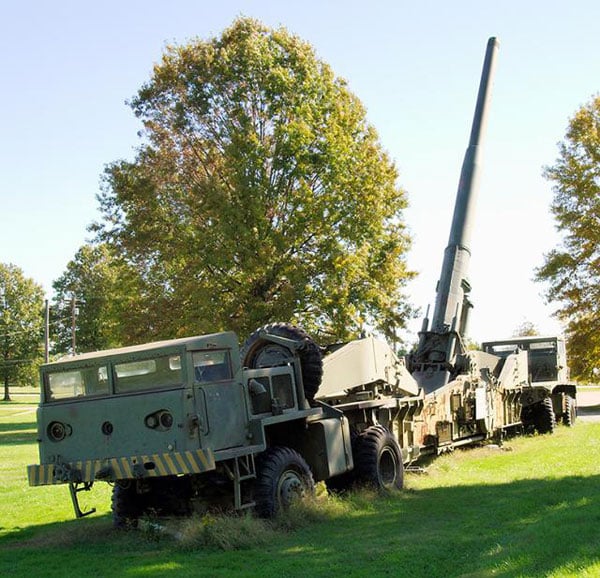 280mm M65 on display with prime mover at each end.

The largest mobile artillery piece that the US had was the M1 “Black Dragon” 240 mm (9.5-inch) howitzers. This Sasquatch of a gun had a 27-foot long barrel and could fire a 360-pound shell some 25,000 yards. While this was big, it wasn’t big enough. The bomb dropped on Hiroshima in 1945 was so big (9700-pounds) that it had to be carried by a four-engine bomber. 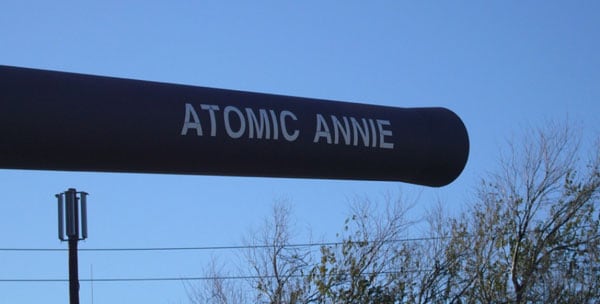 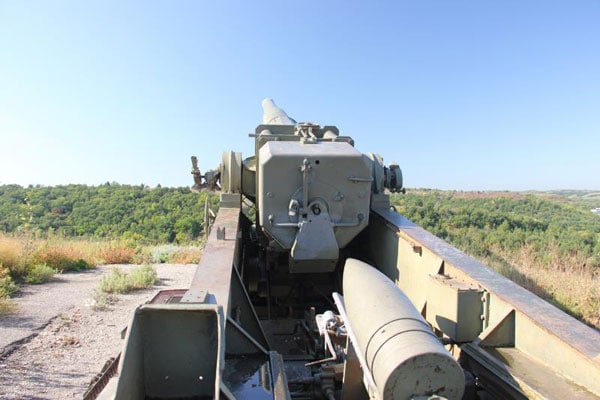 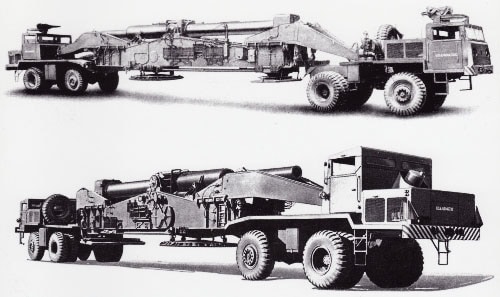 Atomic Annie in traveling rig. Moving this cannon was a huge undertaking (no pun intended), but achievable.

Big gun engineer Bob Schwartz at Picatinny Arsenal came up with a design that borrowed heavily from the German’s Krupp-made K5 11-inch railway guns, but modified to be moved on roads by a pair of huge tractors. This gun, labeled the M65 and nicknamed ‘Atomic Annie’, wound up being the largest road-mobile artillery the US ever put into production at some 84-feet long, and a total weight of 83-tons. The 38.5-foot long barrel had a 280mm bore, some 11-inches across. For an idea of just how big this is, you can slip a regulation bowling ball into the muzzle and half almost an inch to spare all the way around.

The round that gave Atomic Annie her nuclear nickname, the W9 warhead, was 11-inches wide, 55 long and weighed 803-pounds. It used 110-pounds of enriched weapons grade uranium, arranged in an advanced ‘ring and bullet’ system that collided when fired and set the device on a 15-kiloton chain reaction by the time it hit the target. This was roughly the same size explosion as the Hiroshima bomb, just in a much smaller package. 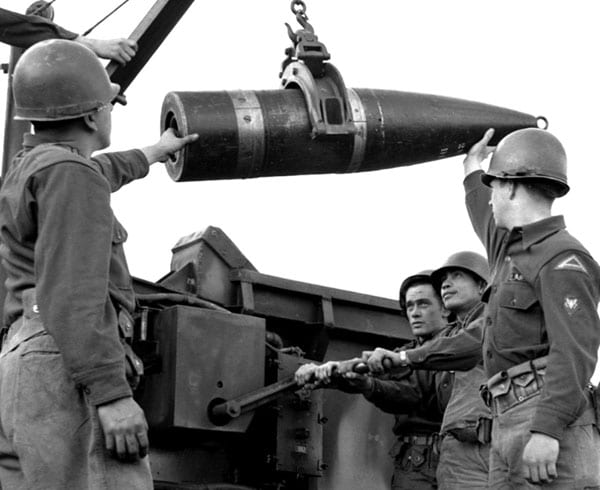 How would you like to be the guy that dropped the atomic shell? 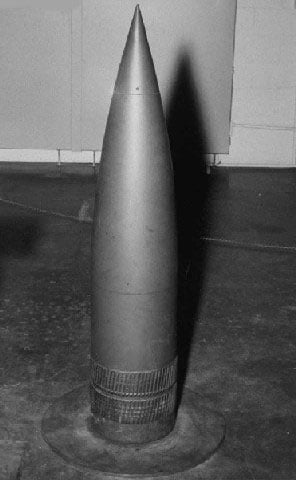 When fired, a double recoil system ate up the rearward motion of the huge rifle, keeping it from toppling over on its turntable pedestal. With a 375hp diesel prime mover tractor pushing the rear of the carriage, and another pulling it from the front, Annie could be moved at speeds of up to 30mph, provided you had enough road.

A well-drilled five man crew could stop the M65 at an unprepared site, set it up, fire a nuclear-tipped shell at a target 18-miles away, and be rolling again all within 30 minutes. Thirty minutes or less, or your next mushroom cloud is free!

Some 20 of these mammoth guns were made. Watervliet Arsenal in New York produced the gun itself. The carriage was produced at Watertown Arsenal in Massachusetts. It was so big it didn’t look real. A prototype of the M65 rode in President Eisenhower’s 1953 inauguration parade—behind a trio of elephants. Soviet military experts watching the footage must have started to work immediately on their own nuclear gun, the 2A3 Kondensator 2P, but never quite got it to work right. 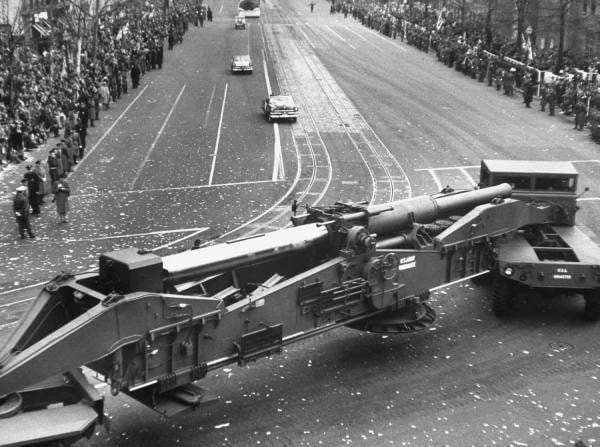 On May 25, 1953 one of the only 80 W9 shells made was fired at Frenchman Flats, Nevada. The shell accelerated to 2,060fps and detonated on target 6.25-miles away just 19 seconds later. Chilling footage of the test, showing both the gun and the explosion in the same camera angle, was sent round the world. Total R&D time from first gun, from sketch to mushroom cloud, was just under five years. 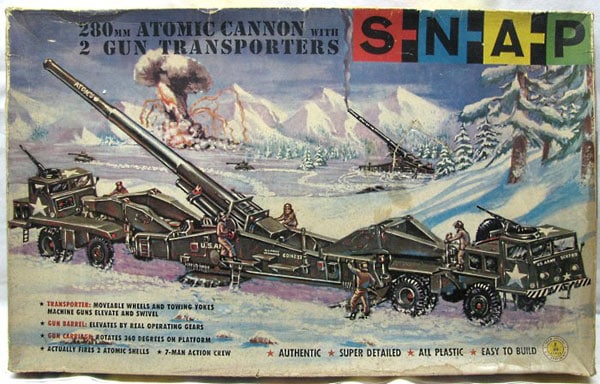 With its design proven, the guns and their shells were soon shipped to Germany and South Korea. There, they spent nearly a decade in near constant movement. The key to their deterrence being in the unpredictability of their location, they were shuttled around the countryside often.

However, Annie’s time at the line was short, being withdrawn by 1963. By that time, smaller nuclear artillery shells that could be fired from regular 155 and 203mm guns had been developed.

The M65 series guns were just too big and bulky to be effectively hidden. You ever had to pull over in traffic so that a house mover can get through with an oversize load? Then you understand the scale of these guns. Add a few nuclear-tipped shells to the convoy and its game on. Too large for any plane to carry, the M65 had to be broken down and sent via ship overseas, then take a trip by train before finally being reassembled at its base. 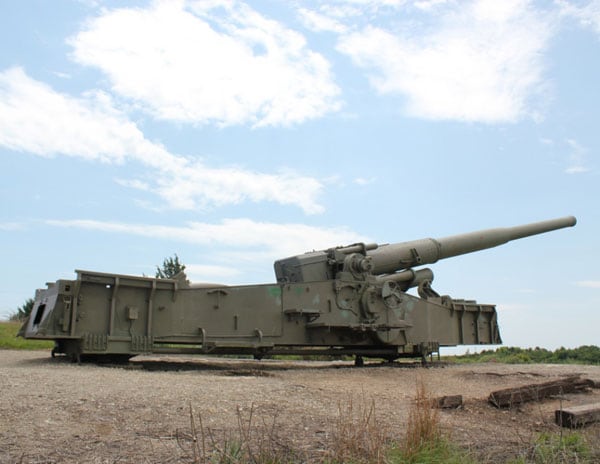 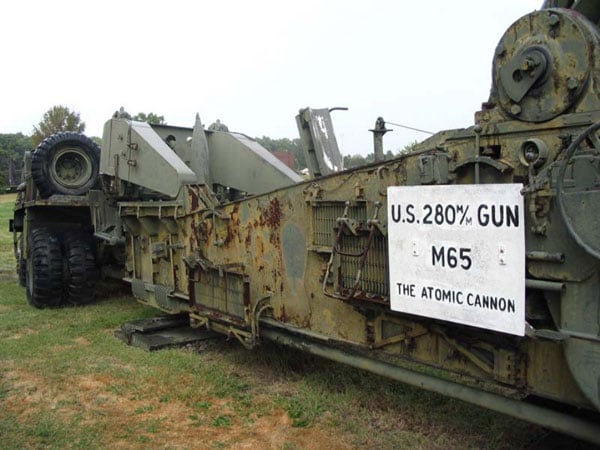 …but saw little to no action.

The power of the atom forever changed warfare, and in a way helped prevent World War 3. It could be argued that if tactical nukes like Annie and her type were not forward deployed to the front lines of the DMZ and the Iron Curtain, Soviet/Chinese leaders may have rolled the dice on a brutal land campaign against a greatly outnumbered US force. Instead, Annie and her sisters held the line until replaced by…other tactical nukes.

What happened to them?

Pulled from the front lines, some of these guns were torched and scrapped overseas rather than be sent back home. The 79 remaining W9 shells were cut down and made into T4 ADM bombs, one of the earliest ‘backpack nukes’,  which kept them in quiet service for a while longer. Hey, why throw away a perfectly good nuke, right?

The US military got out of the nuclear artillery shell business in 1991, at the end of the Cold War. The final 155mm and 203mm shells were dismantled in 2004. 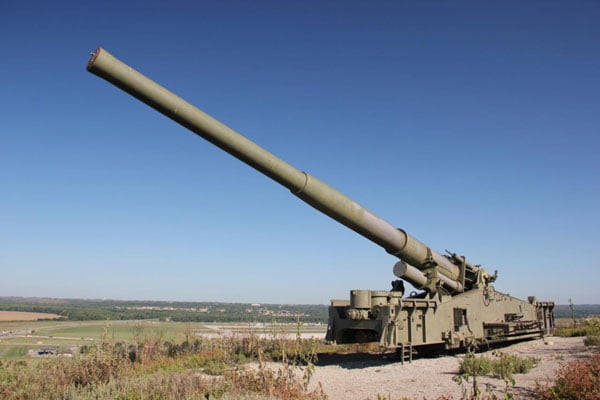 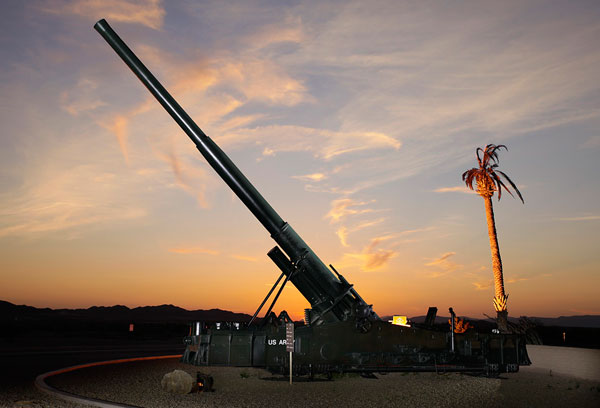 At least eight of the 20 M65 artillery pieces are preserved on public display across the country. The condition of these ranges from ‘tube-only’ rust buckets to a near fully restored example at Fort Sill. The Sill gun was the original Annie that fired the one and only tested atomic shell back in 1953. Other than not having the nude female ‘Able Annie’ artwork on the carriage, she is the same as she was sixty years ago.

If you do visit one of these big guns, challenge those with you to a game of ‘rock, paper, scissors’ and know Annie has your back.

Updated from the original to remove an incorrectly described image.