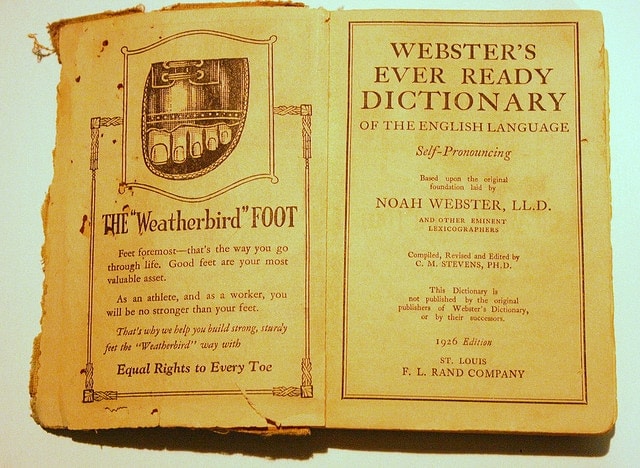 The New Hampshire courts used an updated version of Webster’s dictionary. But this one is still pretty good.

The New Hampshire Supreme Court threw out a case earlier this month and clarified the definition of a “loaded” firearm after Oriol Dor was charged with carrying a loaded gun even though there weren’t actually any bullets or even a magazine in the gun.

In May 2012, police found an unloaded .40-caliber semi-automatic pistol in the glove compartment of Dor’s car. Sitting beside the gun was a magazine. The magazine was not in the gun and there were no bullets in the chamber of the gun. However, Dor was still charged and convicted of “knowingly carrying a loaded pistol” without a license, a Class A misdemeanor which is punishable by up to one year in jail and a $2,000 fine.

The case went to court and the defense argued that the gun was not loaded and therefore no laws were broken.

State law prohibits residents from carrying a loaded firearm in their car or concealed on their person without a license and, according to the statute, a “loaded pistol or revolver shall include any pistol or revolver with a magazine, cylinder, chamber or clip in which there are loaded cartridges.”

The four-letter word which held the fate of Dor’s otherwise clean record was “with.” The state argued that since the magazine was near the gun, it was with it and therefore construed that the firearm was loaded.

Dor was convicted, but he appealed the court’s decision. The case ended up in the New Hampshire Supreme Court, where common sense eventually prevailed but not before much debating over the definition of “loaded.” In fact, a dictionary was brought out during the case to help define not only the meaning of “loaded” but the meaning of “with” as well.

According to the “Webster’s New Dictionary and Thesaurus,” the word “with” means “denoting nearness, agreement, or connection,” therefore, at the interpretation of the state, Dor’s firearm was considered loaded since it had a magazine near it.

However, according to the “Webster’s Third New International Dictionary,” the term “loaded” is defined as “containing an explosive charge.” Additionally, the court determined that “loaded” is the past participle of the verb “load,” which is defined as “to put a load on or in a carrier, device, machine, or container; [specifically] to insert the charge or cartridge in the chamber of a firearm.”

Dor’s case was eventually dismissed by the state’s Supreme Court and clarification was made in an opinion published last week which defined a “loaded” firearm as one “containing a cartridge in any position from which it can be fired.”

In other words, a loaded firearm is one which has bullets – well, loaded – in the gun itself not just beside or near it.