Piers Morgan lies to save face, says Virginia has highest murder rate in the country (VIDEO)

Piers Morgan blatantly gave false statistics during an interview with Breibart Hawkins, who claimed “more guns equal less crime.” But thanks to NewsBusters, Morgan can sleep sound knowing someone has cleared things up for him. 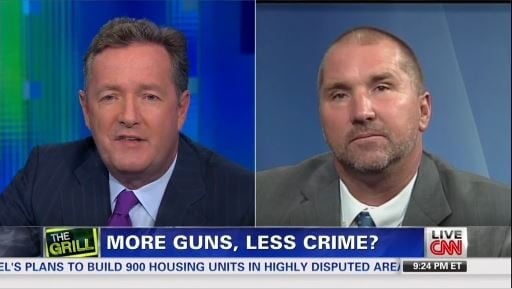 Morgan falsely claimed Virginia had the highest murder rate in the country.

Morgan was concerned about the spike in gun sales in Newtown, CT, the very town where the Sandy Hook school shooting took place. Finding it disconcerting, Morgan asked Hawkins if he felt the same way.

In short, no, he didn’t. Hawkins believes that “more guns equal less crime.”

“In Virginia there was a 16 percent increase in gun sales in 2012. That’s 490,119 guns were sold. Now you would expect, the way you speak Piers, for violent crime to rise proportionally. It didn’t,” Hawkins said. “It fell 5 percent. There were 4378 incidents of violent crime…”

Hawkins tried to go on to explain that number was down from 4,618 from the year prior, but Morgan cut him off, saying that the very state he just gave for an example, Virginia, actually had the highest murder rate in the country according to 2009 statistics by the FBI.

Nope. According to the FBI’s 2009 Crime In The United States report, Virginia is, in fact, behind 23 other states plus Washington, D.C. and Puerto Rico in the murder of non-negligent manslaughter rate per 100,00 inhabitants.

Perhaps Morgan will later claim he meant to refer to the firearm murder rate, in which case Virginia still would not be the highest in the country.