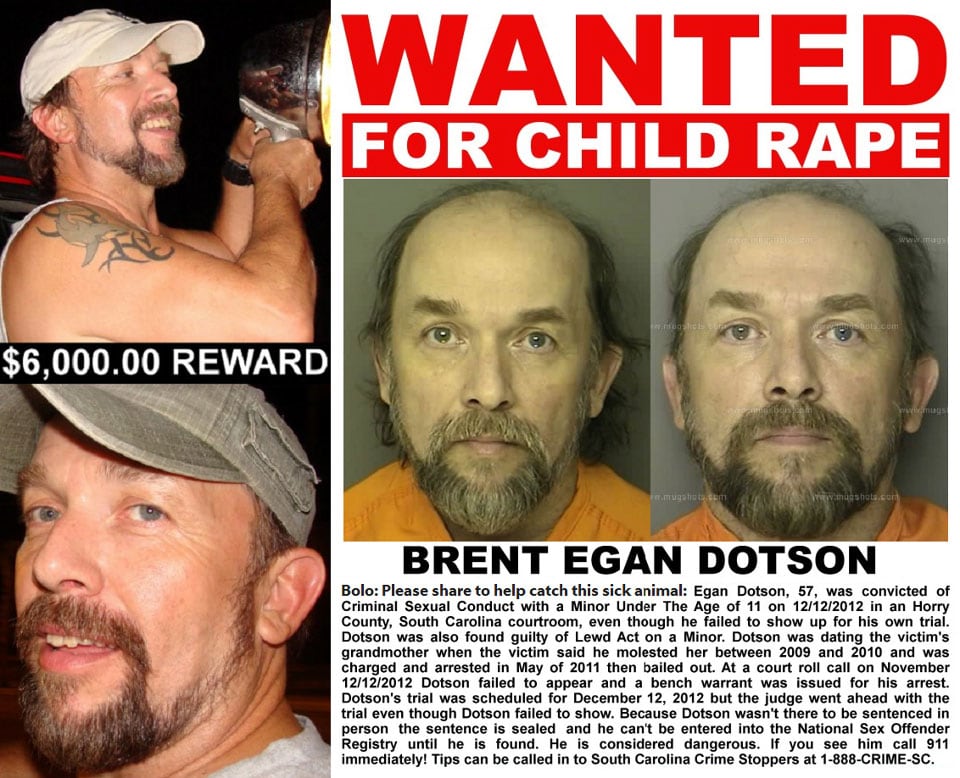 “Anything that involves a child sticks out pretty hard in your mind,” Lieutenant Steve Cox of the Horry County Sheriff’s Office said.

A man who was wanted in South Carolina for the rape of a 6-year-old girl was shot and killed by police in Alabama last week.

Brent Egan Dotson, 57, was convicted in December of Criminal Sexual Conduct with a Minor Under 11 and Lewd Act on a Minor, despite failing to appear to court for the trial. He was to be sentenced and placed on the state’s sex offenders registry, but went missing before that could happen. Since his conviction is a violent offense, he would have been placed on the registry for life.

Apparently Dotson was dating the victim’s grandmother. He molested and repeatedly raped the child from 2009 to 2010, according to court testimony.

Prosecutor Candice Lively considered Dotson to be a dangerous individual and wanted to make sure that his picture was widely circulated following his disappearance.

Lt. Steve Cox of the Horry County Sheriff’s Office agreed and explained that, more often than not, these violent offenders rather than being captured or turning themselves in, they re-offend. This sometimes leads to them being caught later on, but it also leads to more victims, victims who, in this case, would be children.

Dotson’s trial was originally scheduled for last September, but he received an extension until December due to a medical excuse. Only Dotson never showed up for the trial and wasn’t seen again until August of this year.

Last Friday just after 8 a.m., a woman in Huntsville, Alabama, called the police to report a suspicious man, who turned out to be Dotson, in her mobile home park. Although it’s unknown if the woman knew that the man was Dotson or that he was wanted.

“He just didn’t look right, he looked disturbed, very crazy,” Samantha Perry told reporters. She made the initial call to the police and witnessed the entire shootout unfold from her front window.

When officers arrived, they found Dotson, who was armed. He fired at the police and they fired back, but it’s unclear who fired first. However, what is clear is that Dotson was fatally struck during the shootout.

Authorities do not know where Dotson was staying or how long he had been in Alabama.

“It’s kind of shocking cause he could’ve gotten to my kids and the rest of the kids around here. I just can’t believe somebody like that was here. … I hate that the man lost his life, but he can’t hurt no more kids, and I’m glad,” Perry said.

The officer who was involved in the shooting has been placed on administrative leave, as is standard procedure.

As for Dotson, he will never harm another child again.