A woman was shot in the head when a stray bullet from a neighbor’s AR-15 found its way into her house in Dana Point, California.

Laurie Horton was sitting at her kitchen table working on a scrapbook for her granddaughter when shrapnel from a bullet struck her in the forehead, according to a local report.

“[It was] like somebody hit me with a baseball bat,” Horton said, describing the impact. She shouted for her husband, Jim Horton, to help her as a crimson trail of blood flowed from her head. 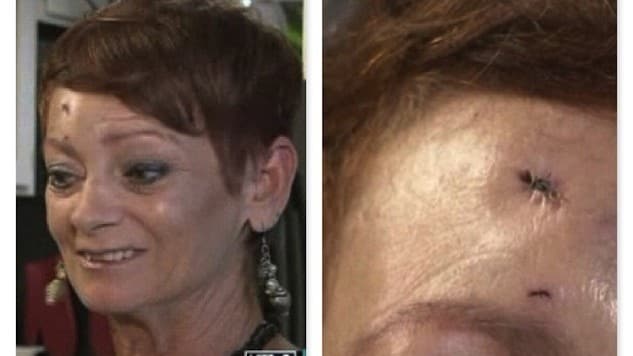 Laurie Horton remains in high spirits, even after being shot in the head.

“I realized that Laurie was bleeding from the forehead. Didn’t know why or anything. I thought something exploded, like the computer, or the phone, or something, or a light bulb. We didn’t know. And then our neighbor came running over and said, ‘Are you okay? Are you okay? My gun went off,’” Jim recounted the event.

In another house sat Horton’s neighbor, who refused to be identified, disassembling his AR-15 when he negligently discharged it. He was distraught about the incident and immediately rushed to check on the occupants inside the Horton residence.

“I had just gotten a new gun and I was testing out parts of it, taking it apart and putting it back together,” he said. “I was scared to death. It’s brand new. I picked it up that day. I was putting it together trying different parts on it.”

Police are not likely to press charges against the owner of the rifle.

“The investigation so far indicates everything was an accident,” Dana Point Police Lt. Jeff Hallock said.