A video recently posted on Live Leak shows the possible dangerous effects of using Tannerite, a product made up of ammonium nitrate and aluminum which causes a small explosion when shot. The product has made headlines several times recently as both its safety and possible uses are questioned.

The video shows a man shooting at a computer which he has rigged with an unknown amount of Tannerite. Immediately following the explosion, pieces of shrapnel from the computer can be seen flying through the air. One of these pieces was launched into the shooter’s forehead. 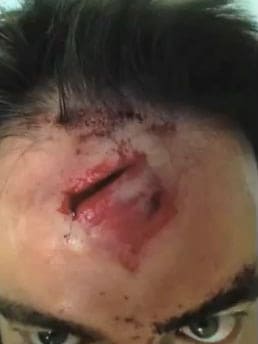 The gash left on man’s forehead after he was struck with shrapnel.

Concluding the video are photos of the man with a large gash in his forehead. Obviously, if the impact was much stronger, the wound would likely have been fatal.

In June a similar incident occurred when a man in Arendahl Township, Minnesota, was shooting at Tannerite targets during a bachelor party. Once again the resulting explosion ended in shards of metal flying through the air. Only in this particular incident a large piece of metal was launched into the stomach of Jeffrey Taylor, killing him within minutes as his horrified children looked on. Following the incident, the shooter faced charges for Taylor’s death.

In addition to the obvious dangers of flying shrapnel when shooting Tannerite with foreign objects, there was recently some question as to whether or not the compound is responsible for starting wildfires, but the creator of Tannerite, Daniel Tanner, maintains that his compound cannot ignite wildfires.

However, the company also states that “many knock-off brands … are poorly formulated and use lower quality materials that may start fires.”

Part of the problem also being that the word “Tannerite” has come to describe any and all binary exploding rifle targets, not just the specific Tannerite brand. Regardless, the U.S. Forest Service has ban the use of Tannerite — and all similar products — on federal land in Colorado, Wyoming, Kansas Nebraska and South Dakota.

Following the Boston bombing, Tannerite made headlines once again as a possible source for creating bombs, particularly improvised explosive devices or IEDs. And since Tannerite is a binary compound, meaning that it has two separate materials which must first be combined before becoming potentially explosive, the product is not regulated by the ATF because it is not considered an “explosive” in its manufactured form. Nonetheless, some claim that the threat still exists that terrorists will use the readily available product to wreak havoc.

However, just because it’s not regulated by the ATF doesn’t necessarily mean that the use of Tannerite doesn’t garner attention from the agency anyway.

In fact, Youtuber FPSRussia, whose real name is Kyle Meyers, had his home raided by federal agents in March because he commonly used the compound in his videos.

Some 4 million viewers watch Meyers as he blows stuff up with what appeared to the ATF to be explosives, but was actually large – much larger than recommended – amounts of Tannerite. The ATF found no explosive devices on Meyers’ property and in fact found that he was doing nothing at all illegal.

And as fun as it is to blow stuff up, the makers of Tannerite are urging consumers to think twice about their actions, which ultimately have an effect on the availability of the product.

The product contains warnings that include not to use more than 2 pounds of the product at a time and never to place the product within an object or on a surface that could produce shrapnel. The product warns that misuse could result in serious injury or even death.

When Tannerite is used in a non-recommended manner and the results are devastating or highly explosive, the product makes headlines. Meanwhile, scores of responsible shooters are using Tannerite safely for its intended purpose, which is a target which will explode on contact with the bullet from a high-powered rifle to accurately – and safely – indicate that the shooter has hit their target.

As the company states in a plea for common sense, “The future of these targets is in your hands, so please use them properly.”