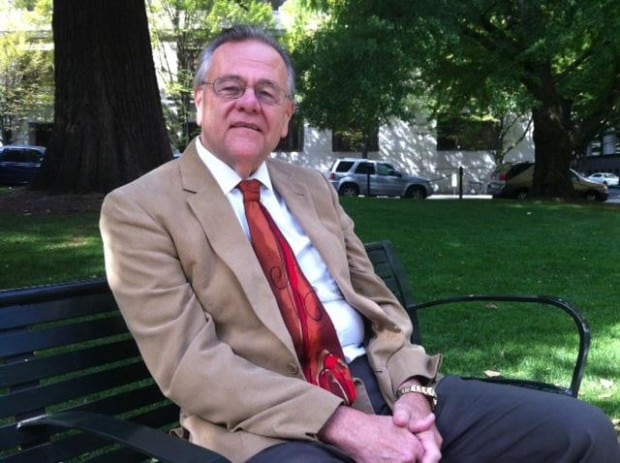 Justice Richard Baldwin before he became a Justice, when he was just a jolly old man. (Photo credit: Oregon Public Radio)

An ordinance banning individuals from carrying loaded firearms in the city of Portland, Oregon, is constitutional, the state’s high court ruled on Thursday.

Justice Richard Baldwin, who penned the unanimous ruling in State and City of Portland v. Jonathan D. Christian, explained that the ordinance is constitutional because it’s not an outright ban on carrying loaded firearms in public. Instead, it just regulates “the manner of possession and use of firearms in public places.”

To be more specific there are 14 exceptions to the law, including one that permits law-abiding individuals with valid concealed carry permits, police officers, licensed security guards and other groups of people to bear arms in public.

“The ordinance reflects a legislative determination,” Baldwin wrote, “that the risk of death or serious injury to members of the public moving about in public places is increased by the threat posed by individuals who recklessly fail to unload their firearms.”

The plaintiff in the case, Jonathan D. Christian, was arrested in 2008 for bringing a bag full of weapons into a convenience store. According to the police report, Christian had on him an empty gun holster, a loaded magazine, two knives, pepper spray and, in the bag, two semiautomatic 9mm handguns and additional magazines.

It doesn’t appear that he had any foul intent. Nevertheless, his bag aroused the suspicion of nearby police officers.

Christian was arrested and convicted of violating the gun ban in Multnomah County Circuit Court. He appealed his conviction before the Oregon Court of Appeals in 2011. However, the appeals court upheld his conviction.

Christian and his attorneys then petitioned the state Supreme Court, which agreed to hear the case. Before the court, they argued that the ordinance, which carries a mandatory 30-day sentence if one is convicted, violates one’s right to keep and bear arms for traditionally lawful purposes, like self-defense, a right that’s guaranteed in both the Oregon and U.S. Constitution.

However, due to the aforementioned exemptions, in particular the fact that one can obtain a concealed carry permit, the court did believe that law was unconstitutional.

In an interview with The Oregonian, Harry Auerbach, the Chief Deputy City Attorney for Portland, said that the ruling will have statewide implications as other towns and cities have similar restrictions on where one can carry loaded firearms.

“The ability of cities statewide to protect their citizens was an important consideration” for the court, he said, adding that the ruling bolsters efforts “to protect the safety of people on the streets of Portland by limiting the number of loaded firearms that are out there.”

Christian was not at all shocked by the ruling. He, in an interview, said that although he had not yet seen the ruling, expected the court to affirm his conviction.

In the wake of this ruling, perhaps it’s best to remember what Second Amendment Foundation attorney Alan Gura, who argued the landmark Heller case before the Supreme Court in 2008, said about our constitution in a recorded speech for the 2012 Gun Rights Policy Conference.

“We’d like to think that the Bill of Rights was ratified in 1791, but in reality, in the practical and for your daily life, the bill of rights means what judges tell you it means and judges in our country are a byproduct of the electoral process,” Gura warned. “Forget about 1791, the Second Amendment is on the ballot, this time, next time, every time.”

Indeed. We need to demand that our lawmakers and more specifically our judges, “are committed to enforcing the whole Constitution whether they personally agree with it or not,” as Gura also pointed out.