Gun battle erupts on the streets of Oakland, dashcam captures it all (VIDEO)

The streets of Oakland can be a dangerous place. A dashcam captured video of two gunmen who opened fire on a passing vehicle on an otherwise quiet street.

When the two men – one wearing a blue hoodie and the other in a white hoodie – fired at the corner of 23rd Oakland and East 23rd , the car hesitated before speeding away to avoid getting hit. But one passerby didn’t really seem to give it much thought at all. 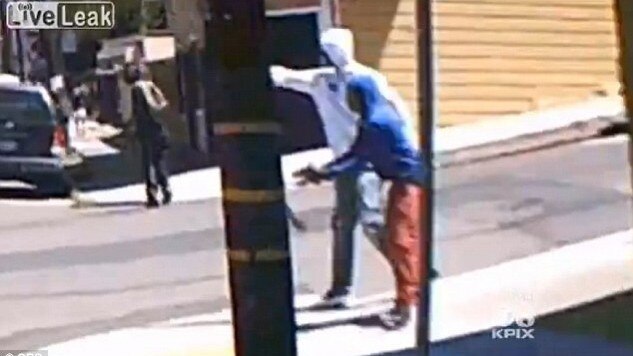 The gunmen taking aim in Oakland.

The motorist told KP1X5, “I’m scared to death. I feel unsafe to live in Oakland.”

Watch as the man wearing the backpack on the right side of the screen peeks over his shoulder to investigate the commotion, then casually changes direction without so much as missing a beat.

This one-sided gun battle is the most recent in a string of gun-related violence to make headlines in what is being seen as the increasingly lawless city of Oakland.

“It’s really disturbing and alarming that this is continuing on a daily basis. We need to take these guns off their hands and the only way to do it is to stop, question and search people and remove their guns,” Gallo said.