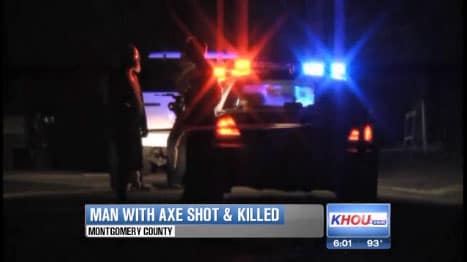 Reports state that the man had his wife inside the home, along with at least three young children, all under the age of 10. (Photo credit: KHOU)

A man in Montgomery County, Texas, was shot and killed Friday night after he threatened a family while wielding an ax.

It was about 11:30 p.m. when deputies responded to the call. According to local reports, previous to the shooting, the 40-year-old man had been engaged in another disturbance at a house a few doors down. Reports indicate that the two men were arguing at that home, but the one man left and went to his own home to keep the argument from escalating.

However, the man who he was arguing with followed him in an aggressive manner, driving his truck through the neighbor’s yard to get to the other man’s house. He then parked his truck in front of the home, got out, grabbed an ax and advanced toward the homeowner through the yard, threatening the family inside along the way. The homeowner shot the man as he came closer to the home, where his wife and three young children were inside.

The man was struck in the chest once. When deputies arrived at the scene, they transported him to a local hospital where he was pronounced dead.

The name of the man who was shot has not been released, pending notification of the next of kin.

The name of the homeowner who shot the man has not been released either.

No charges have been filed against the homeowner, who acted in self-defense.

It was unclear why the two men were arguing and why the man’s family was threatened.