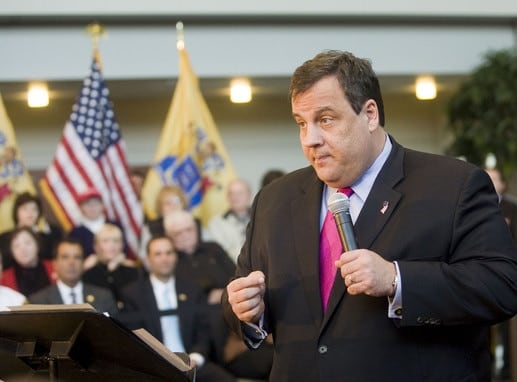 The audience was shocked after Gov. Christi threatened to punch a dude in the face, allegedly.

On Friday, New Jersey Gov. Chris Christie vetoed three gun control bills, including one that would have banned .50 caliber rifles, something that his administration initially called for in the wake of the mass shooting at Sandy Hook Elementary School in Newtown, Connecticut.

The other two bills Christie vetoed included one that would have overhauled the state’s process for issuing firearms ID cards and legislation that would have required state police to issue reports on lost, stolen and discarded firearms using trace data provided by the Bureau of Alcohol, Tobacco, Firearms and Explosives.

With respect to the ban on .50 calibers, Christie said in a statement to the General Assembly that the bill “will not further our collective fight against crime, but serve only to confuse law-abiding gun owners with the threat of imprisonment for lawful recreation. I cannot approve of that result.”

His veto of the .50-caliber gun ban drew the ire of democrats, who accused Christie of putting his personal political ambition ahead of the public good. It’s widely assumed that the republican governor will make a bid for president in 2016.  Thusly, Christie’s veto was a way to shore up future votes from his G.O.P. base.

“Banning these battlefield-style weapons was designed to keep these highly destructive firearms out of the hands of dangerous criminals and terrorists,” State Assembly Speaker Sheila Y. Oliver said in a statement.

“Instead, the governor has shunned this notion and bowed to the pressure of right wing conservatives.”

Christie announced his vetoes at 6 p.m. on Friday, which critics believe was done intentionally to avoid media scrutiny.

“One person with one of these guns and incendiary armor piercing bullets could knock down a chemical plant and kill hundreds of people,” said Bryan Miller, the leader of a faith-based pro-gun control organization called Heeding God’s Call.

“Chris Christie clearly is courageous for his place in the Republican Party, but not for the residents of New Jersey,” Miller said, adding “This shows real cowardice to put this out the public and the media at after 6 o’clock on a Friday ,” Miller added. “He wants it to be buried.

Perhaps the most shocking of Christie’s vetoes, was his decision to block Democratic Senate President Steve Sweeney’s centerpiece bill, S2723, which is an arduous 40 pages long and details the process in which a gun can be bought or sold. Sweeney described his baby as the “national model” for gun laws.

As noted in a previous Guns.com article, the bill would have rewritten New Jersey’s current process dictating how a gun is sold, most notably by revising New Jersey’s firearm ID card system.

According to the bill, the data collected for issuing a firearms permit and a driver’s license would be “distinct and separate entities” and would also be housed separately by the state police, Motor Vehicle Commission, mental health facilities and ammunition retailers.

Christie nixed this idea because it just not technologically feasible at this point in time.

“None of the technology necessary for this system exists. … [T]he smartcard called for by this bill cannot be implemented now or any time in the foreseeable future,” Christie said in his conditional veto message.

Lastly, Christie sided with gun-rights proponents in his veto of the ATF reporting mandate of lost, stolen and discarded firearms, contending  that it would conflict with a federal law that bans “the knowing and public disclosure of ATF trace data information that law enforcement entities receive by virtue of their participation in the ATF firearms trace system database program.”

“After seven months of battle over misguided legislation that won’t stop another crime or prevent another tragedy, we are grateful that Governor Christie has finally ended the discussion on the worst of the bills by tossing them onto the scrap heap where they belong,” Scott Bach, Executive Director of the Association of New Jersey Rifle & Pistol Clubs, told NewJersey.com.

“These vetoes put gun-banning politicians on notice that exploiting tragedy to advance an agenda against legal gun owners, instead of punishing violent criminals, will not be entertained,” he added.