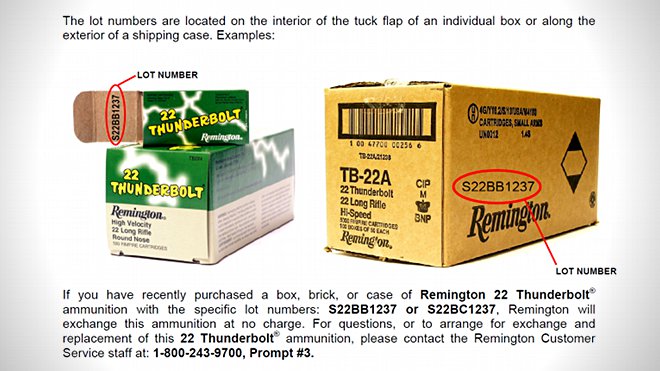 At a time when many people are happy to be able to find any amount of rimfire ammunition at all, some people that have had the appearance of good fortune of picking up some .22 Long Rifle ammo will, sadly, have to send it all back.

Remington has announced a recall on two lots of .22 Long Rifle, Remington 22 Thunderbolt S22BB1237 and S22BC1237. These two lots of Thunderbolts left the factory without adequate crimp and as such, are susceptible to separation.

While mostly it means that the ammo may fall apart with rough handling, a loose crimp with heeled .22 bullets means that it’s possible to chamber a cartridge, extract only the case, and load a fresh cartridge behind the still-chambered bullet, similar to a squib. Firing a gun in that condition could lead to catastrophe.

Or it could just jam up and prevent the gun from being able to chamber any ammo, which while harmless, is still fairly annoying. The ammo can also just come apart, ruining itself and your day at the range.

For all the details, head over to the Remington recall notice page. If you do happen to have some of this improperly-manufactured ammo, call Remington right away and they will replace it for you at no cost. 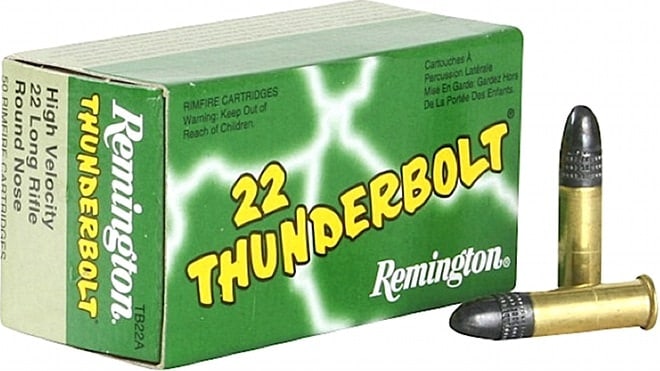 “Remington has determined that two specific lot codes of Remington 22 Thunderbolt ammunition may contain rounds with an insufficient crimp on the bullet. This issue is specific only to lot numbers: S22BB1237 and S22BC1237. Handling or loading this 22 Thunderbolt ammunition could result in the separation of the bullet from the shell casing. In certain situations, this occurrence could render the firearm inoperable.

“Remington would like to apologize for any inconveniences or concerns that this issue may have created for our customers. We thank you for your continued support of Remington firearms and ammunition products.”

While ammo recalls are uncommon but far from unheard of, we have to wonder if the massive increases in demand for guns, ammo and accessories has made it difficult for companies to keep up while maintaining peak quality control.

Do you think the rise in demand has affected products’ quality in general this year?