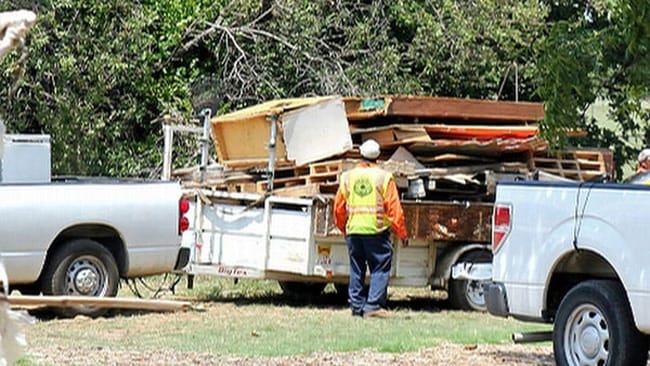 Apparently it’s acceptable to put these materials in plastic tubs at the edge of the street for collection by the city, but collecting them for sustainability projects – the ultimate in backyard recycling – is unacceptable. (Photo credit: WFAA)

The police department in Arlington, Texas, essentially destroyed an organic farm when SWAT “showed up unannounced, uninvited, raped the land and held captive every human present at gunpoint,” according to a statement by The Garden of Eden.

Authorities eventually claimed that they were there to infiltrate an illegal marijuana growing and drug trafficking operation, but absolutely no evidence of any such activity was discovered on the property.

The SWAT team raided the farm on the morning of Aug. 2, after a search warrant had been signed the day before. The city claims that they received a number complaints that marijuana was being grown on the property, in addition to ongoing complaints about conditions on the property including “grass that was too tall, bushes growing too close to the street, a couch and piano in the yard, chopped wood that was not properly stacked, a piece of siding that was missing from the side of the house, and generally unclean premises.”

When authorities did not discover any pot plants on the property, they issued additional citations for code violations instead and hauled off several trailer loads of materials which the farm used for various purposes in maintaining the operations on the premises.

The eight adults who were at the farm during the raid claim that officers came in and immediately detained them by handcuffing them and holding them at gunpoint. This included the mother of a 22-month-old and a two-week-old baby who were separated from their mother during the raid. The city however, states that they only detained them for 30 minutes, as is standard procedure during a narcotics investigation, and that after half an hour anyone who was on the property was free to leave if they so wished.

Quinn Eaker, who lives at the farm, told reporters, “I think every single right we have was violated, every single one.”

However, the raid was not a total waste, as officers did discover that Eaker had outstanding traffic violations and was subsequently arrested.

The police department maintains that they conducted the raid with dignity, professionalism and respect and that SWAT cleared the scene within 45 minutes. However, those who were on the farm claim that the entire ordeal lasted more than 10 hours.

The City of Arlington spokeswoman Sana Syed said in a statement, “The purpose was to improve the quality of life, to resolve life safety issues within neighborhoods and to hold the property owner responsible for creating blight conditions on their property.”

Syed stated that the farm had received numerous code violations since 2011 and had refused to make the changes which the city deemed necessary.

Garden of Eden representative, Shellie Smith claims that she has sent over 20 letters of correspondence with city officials in addition to numerous phone calls in an attempt to resolve the issues, stating, “Show me the law and I will be happy to honor it.” Smith said that she received no response to any of her continued communication efforts.

However, according to a statement by the farm, “The community responded by trimming the bushes growing into the road immediately because it was easy to see how that was an issue that could affect others and therefore was a perfectly reasonable request. The other issues cited are seen by the community members as a private matter of preference, since it is taking place entirely within the confines of their private land and has no effect on anyone.”

In an effort to “improve the quality of life” the raid included authorities mowing down native grasses, destroying both wild and cultivated plants and removing various materials such as pallets, tires and cardboard that had been collected for use in sustainability projects.

Additionally, officers seized compost, blackberry bushes, okra and tomatillo plants and sunflowers, which were a source of food for the farm’s bee colonies. Other plants were destroyed as well when officers took to the garden with Weed-Eaters while searching for evidence of marijuana plants, which they never found.

“They destroyed everything,” Smith said, and vows that the battle is not over.

“We want an apology. This will not end here,” she said.