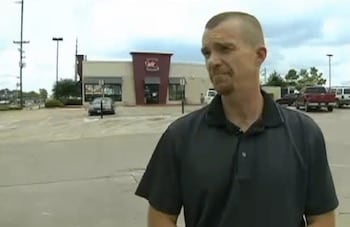 Over the past week, Holcomb has been carrying a loaded Bushmaster AR-15 around town, stopping into stores and businesses as a way to bring awareness to the state’s open carry laws, which prohibit one from carrying a handgun out in the open, but allow one to openly carry a long gun.

For one to carry a handgun, he/she has to obtain a concealed carry permit, which involves paying fees, passing a background check and successfully completing a 10-hour firearms safety training course.

Holcomb firmly believes that Texans should be free to carry firearms in the manner that they see fit.

“Whether it be opened or concealed we just want to be able to choose how we carry,” Holcomb told KHOU 11 News. “We believe that’s our constitutional right.”

Thus far, his style of advocacy has been both embraced and shunned by local businesses.

During a trip to Walmart, Holcomb was confronted by a store manager who politely asked that he leave the premises.  Holcomb agreed to exit the department chain and said that he had no problem with that request.

“Well, the Walmart in Huntsville definitely doesn’t honor Second Amendment rights,” he said in a video that his son recorded while the two were in the store.

“And that is their absolute right,” Holcomb told KHOU 11 News, a week after he posted the videos. “I respect their right just as much as I want them to respect mine.”

On a trip to Starbucks, which takes a neutral stance on the Second Amendment, Holcomb was welcomed by employees.  However, a bystander outside the establishment phoned the police, who showed up to investigate the situation.

Holcomb was not violating any laws so the officers sent him on his way, but not before inquiring about why he was doing what he was doing.

At least one Starbucks customer told KHOU 11 News that she was frightened by Holcomb’s AR-15.

“Kind of scary honestly. It’s a massive gun,” she said. 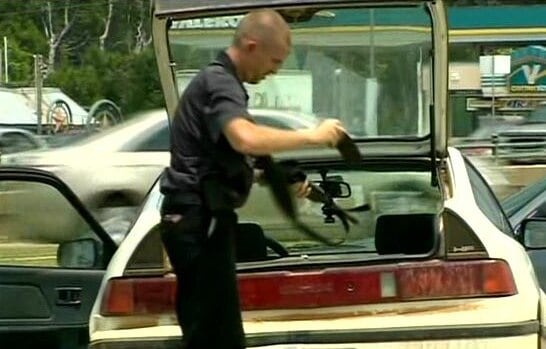 Holcomb grabs his Bushmaster AR-15 from a Honda CR-X, which we didn’t know still existed.

One could argue that Holcomb’s choice to carry a Bushmaster AR-15 instead of a shotgun or a more traditional hunting rifle was destined to cause controversy, as that is the same type of rifle used in the mass shooting at Sandy Hook Elementary School in Newtown, Connecticut, according to authorities.

In addition to drawing attention to the state’s open carry laws, it seems that part of Holcomb’s mission was to remind the non-gun owning public that it’s the person holding the gun and not the gun itself that matters.  In short, one should not fear responsible gun owners exercising their right to keep and bear arms.

Though, not everyone is going to see the merit in what Holcomb is doing.  Gerald Treece, a professor at the South Texas College of Law, believes in placing limits on the Second Amendment.