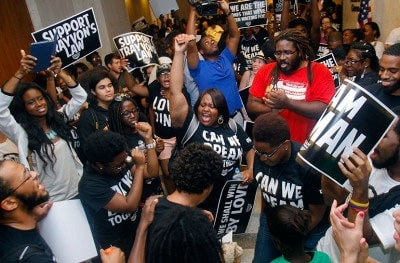 “I have a dream that my four little children will one day live in a nation where they will not be judged by the color of their skin but by the content of their character,” Martin Luther King, Jr. said nearly 50 years ago. (Photo credit: MSNBC)

After a 31-day protest in the Florida state capital ground floor, the group known as the Dream Defenders packed up and headed home.

The group first occupied the building just four days after George Zimmerman was acquitted of second-degree murder in the death of Trayvon Martin and brought the demonstration to an end on Thursday. The protest was organized as an effort to push Florida Gov. Rick Scott to repeal the state’s Stand Your Ground laws and consider a Trayvon Martin Civil Rights Act.

Although Scott did meet with the group to consider their demands, he refused their requests. However, the group still claimed a victory.

“I say to the young people here, you’re ending a protest because you started a movement,” Julian Bond, former chairman of the NAACP, said at a news conference in the Capitol rotunda. “That movement is going to reverberate across the state of Florida and eventually to the adjoining states, until all of America knows something about the strength and the power that was demonstrated here.”

Dream Defenders executive director Phillip Agnew stated, “After 31 days and 30 nights, we are leaving the Capitol for our next phase.” Agnew said that their work and power “have grown too big for these halls.”

Agnew explained that will school starting up again, their group will focus its efforts on recruiting students from colleges and universities around the state – and eventually the country.

“We feel we’ve done all we could,” said Erika Maye, a spokeswoman for the group. “We asked for the special session. We’re not getting it and now we’re going to the individual districts to lobby lawmakers and to register voters. We’re going to take it to the streets,” she said.

The group also said they plan to participate in events in Washington D.C. to commemorate the 50th anniversary of Martin Luther King Jr.’s famous “I Have a Dream Speech.”

Nonetheless, it’s not the end of the Stand Your Ground debate in the state.

House Speaker Will Weatherford announced that a hearing will be held to review the state’s self-defense laws when the committee returns next month since they could not gather the 96 votes needed to call a special session. Forty two lawmakers had voted in favor, 90 voted against, and 28 had yet to vote on whether or not to hold a special session.

Regardless, Agnew said they received pressure to leave the capitol anyway.

“We’re spending way too much on protest security,” Weatherford tweeted the day before the 33 protesters announced they would vacate the building. Preliminary reports indicate that more than $153,000 had been spent on security for the protest. However, Agnew stated that the Capitol Police who had provided security during their one-month stay “deserved a raise.” 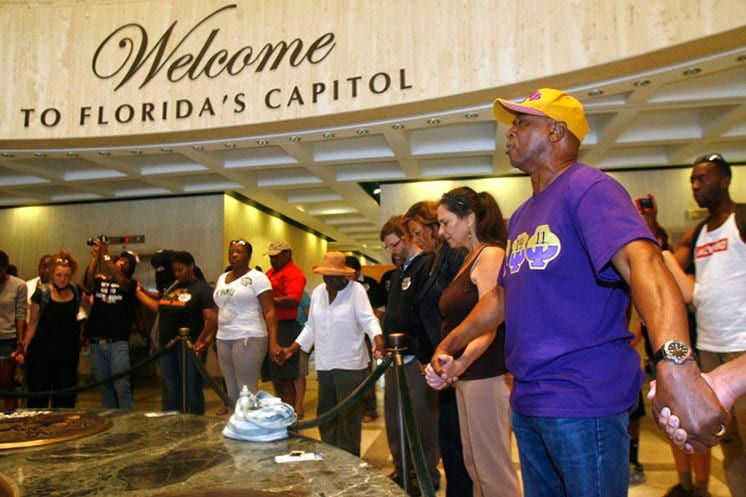 “We said if (Scott) would not give us a seat at the table, we would sleep on the floor until (he) gave us what we deserved,” Agnew said. (Photo credit: Tampa Bay Times)

In addition, the state Department of Management Services scheduled a test of the capital’s fire alarm system while the protesters still occupied the ground floor. The test would have consisted of four hours of “constant ringing of a loud, high-pitched fire alarm throughout multiple floors of the Florida Capitol Building,” a flyer stated. However, due to a nearby lightning strike, the test was cancelled.

Upon leaving the capitol Thursday evening, the group marched to the governor’s mansion and hand delivered an eviction notice to Gov. Scott.