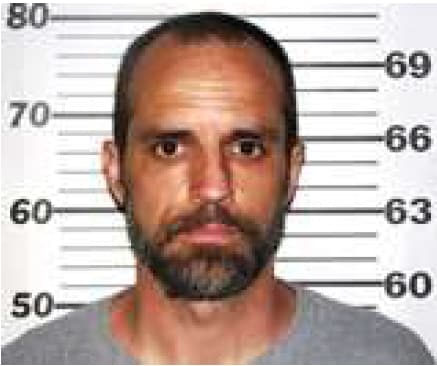 Rodney Long, 38, was scheduled to be released from prison next September.

The search for an escaped convict came to a bloody end early Tuesday morning when he broke into a Bedford, Iowa, home and held an elderly couple hostage for four hours. When the 71-year-old homeowner saw an opportunity to bring the situation to an end, he took it by grabbing a shotgun and shooting the wanted man.

Rodney Long escaped from a minimum security prison in Clarinda, about 20 miles away, last week while serving a sentence for burglary. His whereabouts were unknown until Sunday when someone reported a suspicious man walking down the highway.

Taylor County Sheriff’s Deputy Dan Wyckoff responded to the call and when he stopped his vehicle and got out to question the man – who was, in fact, Long – Long shot Wyckoff in the chest and arm, then drove off in the deputy’s patrol truck.

Another deputy came to Wyckoff’s aid and the two took off after Long in what became a 40-minute chase. All the while, the deputies and Long exchanged gunfire, with more than 50 shots fired.

Eventually, Long lost control of the stolen patrol truck and crashed. But the chase was far from over, as Long then fled on foot and made his escape once again through dense corn fields.

Police officers from Iowa and Missouri, as well as the Nebraska State Patrol aircraft hunted for Long over about 16 square miles. No sign of the escaped convict was found, until he turned up at the home of Jerome and Carolyn Mauderly late Monday night.

Investigators said that Long broke into the Mauderly’s home about 10:15 Monday night. He was still armed with a semi-automatic handgun and had cut the phone lines to the couple’s house. Once inside, he took their cell phones and held the elderly couple hostage for four hours.

At some point during that time, Mr. Mauderly was able to get to his shotgun and subsequently shot Long in the chest.

A massive manhunt ensued after the man escaped from prison, shot a deputy, stole the deputy’s truck, then led police on a chase before wrecking the stolen truck. (Photo credit: Quad-City Times)

“He feared for he and his wife’s safety,” said Iowa Division of Criminal Investigation Special Agent Mitch Mortvedt. “He thought that at the end of this situation, whenever it was going to end, that they’d be killed.”

But Mr. Mauderly refused to let himself or his wife become a victim and took an opportune moment to gain control of the hostile situation.

“As the situation wore on the decision was made by the Mauderlys they were going to defend themselves,” Mortvedt said. “At 2:11 a.m. the Taylor County Sheriff’s Office received a 911 call from Carolyn Mauderly.”

She told the dispatcher that her husband had shot an intruder, although it’s not known if the couple was aware at the time that the intruder was the wanted convict.

A state trooper was near their home and responded immediately. When he arrived, he found Long face down on the kitchen floor, where he was pronounced dead.

“From the appearance of the scene, it appeared that maybe Mr. Long was gathering supplies to further enhance his escape,” Mortvedt told reporters of the four hour ordeal.

The Mauderly’s were not seriously injured during the incident. They are requesting privacy and do not wish to make a comment or otherwise talk with reporters. In fact, one local media source states that the family is having groceries delivered to them by friends.

In addition, Wyckoff was flown to a hospital in Omaha where he is in stable condition and expected to fully recover.

Mortvedt also confirmed that the Mauderly’s will not face any charges for shooting Long, which was obviously done in self-defense.