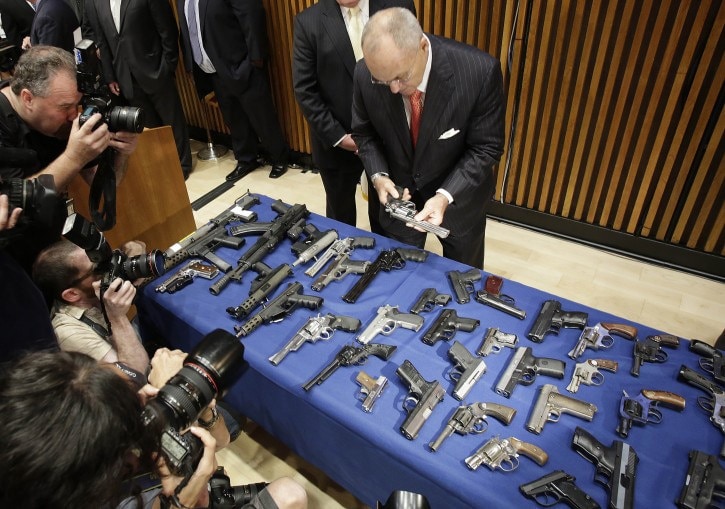 It was the result of a 10-month undercover investigation by the NYPD Firearm Investigation Unit with collaborative efforts from city and federal agencies and police agencies in Sanford, North Carolina, and Rock Hill, South Carolina, according to the news release.

From September 2012 to July 2013, an undercover detective bought firearms from two loosely organized groups, which acted independently of one another but utilized similar methods of operation and shared a common broker, a man named Omole Adedji, who negotiated sales to prospective purchasers in the city.

The NYPD was initially tipped off about the operations after a suspect involved — an aspiring rapper — posted images of guns and money at a music studio in Brooklyn on social media sites such as Youtube and Instagram.

Officials said two men — Earl Campbell of Rock Hill and Walter Walker of Sanford — acted as the runners. They’d buy stolen guns or guns bought by straw purchasers at gun shows or gun stores, load the firearms into suitcases and often transported the guns by riding a bus from their area into Chinatown, or occasionally drove a private vehicle. Then the transactions often occurred at the music studio.

Officials said, investigators closely monitored Walker and Campbell to ensure that the undercover detective purchased all available guns coming to the city.

In addition to documenting 45 illegal sales, investigators kept wiretaps on the suspects.

The news release details specific conversations and messages about logistical issues discussed by suspects within the organizations such as worrying about NYC’s controversial “stop and frisk” laws, how to assemble an SKS rifle, sending pictures of available guns, and even marking up the price for .32-caliber handgun to more than $175.

Officials cited loose gun laws in other states, like in the Carolinas, as reasons for the culprits selling guns in NYC.

According to the statement, the investigation revealed that the gun sellers recognized New York’s tough gun laws made selling weapons in New York profitable. The largest sale of the investigation was 14 guns for $9,700, which was between Walker and the detective back in February. The indictment centers on 208 guns that sold during the course of the investigation for a total of $157,625.

Guns sold ranged from .22-caliber pistols to 7.62x39mm rifles, and semi- to full-auto. Also, officials said approximately 36 of the 208 guns charged in the indictment had been reported stolen, and that the Bureau of Alcohol, Tobacco, Firearms and Explosives are in the process of tracing them.

In the end, the 19 people involved in the sales face numerous counts of Conspiracy, Criminal Sale of a Firearm, Criminal Possession of a Weapon and other crimes.