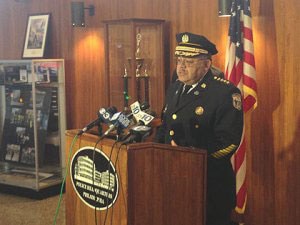 Philadelphia Police Commissioner Charles Ramsey claims that the change in who is responsible for the weapons has nothing to do with either the audit or the missing weapons. (Photo credit: NBC, Philadelphia)

The Philadelphia Police Commissioner Charles H. Ramsey recently revealed that they are still working to find a dozen guns that the department is missing.

“Right now, we have 12 guns that we still need to locate,” Ramsey explained. “But we have more than 100 officers that we’ve not yet checked with.”

And although the firearms aren’t currently accounted for, Ramsey also said, “It’s too soon to say we can’t locate [the firearms]. We have some officers who are out on IOD [injured on duty] status, and others that are detailed to other units.”

“We also have retired officers that we need to check with, to see whether they might have purchased their weapons when they retired,” he said.

This information comes less than four months after it was discovered during a routine audit that the department was missing one of its 1,356 Vietnam-era Colt M-16 rifles from the weapons vault. The vault, which is located at the department’s training academy, has a numerical keypad lock on the door, to which only a “couple of people” have access.

Although Ramsey admitted that they weren’t even entirely sure that the rifle, which was one of almost 1,400 weapons the military gave to the department in August of 2009, was missing.

“It was either taken or there was an inventory error to begin with,” Ramsey said.

Ramsey explained that the department keeps track of its weapons inventory the old-fashioned way, by hand, which can sometimes be a painstaking process and lend itself it errors.

There is currently no report that the missing M-16 was ever found. 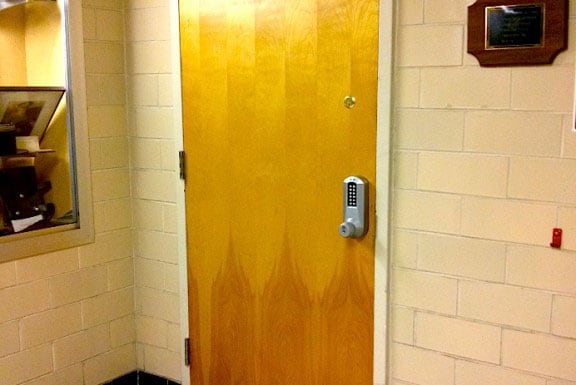 Only a few officers have access to the room where the missing M-16 was stored and there is no surveillance video in the room. (Photo credit: Philadelphia PD)

Capt. Mark Fisher was replaced as head of the department’s firearms-training unit by Capt. Charles Green this week. Green had previously worked in Internal Affairs and Fisher was transferred to offender processing.

Ramsey stated that the change in command was not in any way directly related to the missing weapons.

“I’m just trying to make a few moves, here and there,” Ramsey said. “It’s no reflection on [Fisher’s] ability. He’s a fine leader and a good man.”