City in Wash. ordered to pay man $15K after cop pointed gun at him for openly carrying in park 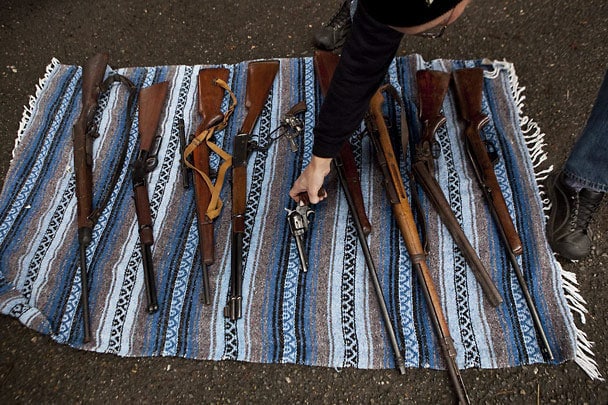 Apparently this wasn’t Laigaie’s only dealing with the local police. Him and two friends showed up near a gun buyback in Seattle in January and purchased a nice array of firearms from residents looking to give up their guns. (Photo credit: The Seattle Times)

A retired U.S. Army master sergeant and Second Amendment advocate will receive $15,000 from the city of Bellingham, Washington, after the man was harassed by a cop for openly carrying a gun in a park. A move which, unbeknown to the cop, was not illegal.

John Laigaie III, 64, was walking his dog in a Bellingham park on Dec. 19, 2011 and openly carrying a properly holstered 9mm on his hip when he was approached by the officer, whose name has not been released.

The officer demanded identification from Laigaie, and then told him that it was illegal to have the firearm in the park. Laigaie respectfully told the officer that it was, in fact, not illegal to have the gun in the park and even offered to show him a copy of the law. Apparently not satisfied with Laigaie’s actions, the officer then allegedly drew his firearm and pointed it at the man’s chest from about 3 feet away.

Laigaie was eventually set free and allowed to leave the park, but now the city must pay the man $15,000 over the ordeal, an amount that some may consider rather conservative for enduring the trauma of having a loaded gun pointed at him.

Laigaie was correct about the law. In fact, the state of Washington has some rather loose laws concerning firearms. Peaceable open carry is legal in Washington, but in order to carry concealed one must possess a valid concealed carry permit. Peaceable is generally defined as carrying a firearm in a manner as which not to cause alarm. This usually means in a properly holstered position without one’s hands gripping the gun. Laigaie was, in fact, carrying his gun in a peaceable manner while he was walking his dog through the city park.

And while it is unlawful to carry firearms in certain places in the state, such as law enforcement facilities, certain areas of court buildings and mental health facilities, the law says nothing about restricting firearms in city parks.

In addition to the cash settlement, Laigaie’s attorney’s stated that the city agreed to provide better training concerning the law for both law enforcement and 911 dispatchers in an effort to prevent this kind of occurrence in the future.