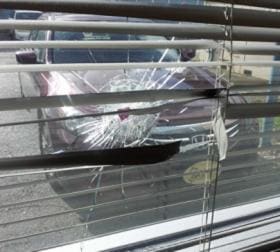 The .45-caliber round went through two windows before lodging into a wall.

Thankfully, nobody was hurt and the round lodged in a wall without causing any injuries. The officer, however, was immediately suspended, according to university spokeswoman Loretta Heyward.

“It sounded like the whole window had exploded – shattered,” she said. “We were freaking out. We jumped to the ground and everything, trying to figure out what was going on. … We were looking around for anyone who was out there. We didn’t see anybody. It was pandemonium for a minute.”

Wasting no time, Middleton removed herself from the situation.

“I had to leave the building because I needed to get away from it,” Middleton said. “I went to another building and sat there for a minute. Then I went to my other classes.” 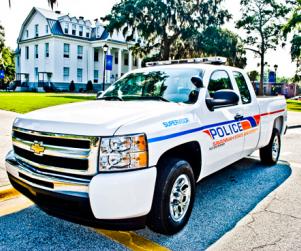 The Savannah State University public safety officer was showing new hires the “nomenclature of the gun” when he negligently discharged it.

Heyward stated the officer was “demonstrating the nomenclature of the weapon used by Public Safety here at Savannah State” to newly hired officers when the weapons was negligently discharged.

“The round should not have been in the gun,” Heyward said. “That is not standard procedure.”

This isn’t the first time something like this has happened. Check out this video from 2006 where a police officer gives a demonstration to classroom full of kids, says “he’s the only one qualified to use this weapon,” then proceeds to shoot himself in the leg.