EDITORIAL: A Warm Fuzzy Feeling for School Teachers carrying Guns in the Classroom

While the country continues to wrestle over how to protect our children from wicked lunatics like the murderer responsible for the Sandy Hook Elementary School horror, our public education system — emboldened by powerful teacher unions — continues to expose children to another crippling and yes, deadly danger: political correctness. Indeed, political correctness, the reigning doctrine of gun-free zones, will be the downfall of our children if gun owners and other patriots allow it.

To some people, government indoctrination of school children may look less threatening than a madman illegally armed with a gun (and all its blood-curdling cosmetic features). But I say instructing students in feelings and self-esteem is leaving us no time to teach students about how to think quickly, critically and how to analyze facts — things they kind of need in life and things they will definitely need in the event of a school shooting, God forbid.

Having taught every level of high school English, I have seen this turn towards liberal dogma and the decline in quality education firsthand.  I can tell you something is seriously wrong on every level when a student reaches high school still reading and writing at a third-grade level — and without a worry in the world.  That last part may be the scariest; the attitude that life is fine, just so long as their nails look good. These students display a confidence they never earned. They tend to justify their shoddy performance and the stupid things their peers do because they feel entitled to their actions (though it’s hard to blame them really when you consider they’re young lives have been filled up with “special little snowflake” drill). Rachel Jeantel may provide a visual. If not, perhaps then the 19-year-old “student” I had in my freshman English class. (But then of course the class was not called “Freshman English”. That might have hurt the little boy’s feelings.)

Consequently, one of the biggest dangers I see coming out of our public education system is that these kids stumble in to society spouting anti-gun messages they don’t understand.  That is because everything they know about firearms they learned from staring at a poster of a little red firearm with a line through it for eight hours a day for 12 years rather than through just one month of quality firearm safety and proficiency instruction.  When you consider how such ignorance impacts social values and dictates our political conversations (i.e. legislative process), this failure to educate (which I thought was the goal of public schools) is downright criminal.

So, in light of all the nonsense that passes for education these days, it leaves little wonder to folks like me as to why a guy can barely finish the somber thought of arming school teachers against nut jobs.  Such trust and independence of thought and action are not compatible with the education machine and before the idea ever gets fully expressed, you’ll find the disciples of feelings frantically shooting a barrage of vague emotional mumbo jumbo meant to cloud a very serious problem: 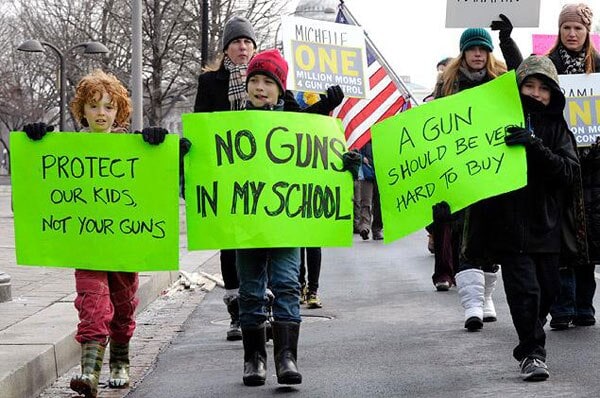 Have you ever tried debating with a six-year old…

“No justice!”  For who?  Dead children?  Has there ever really been?

“This school is proudly gun-free” Well, that is until it isn’t…

“Enough is enough #enough” You could literally protest anything with this slogan.

“Demand safe gun laws”  See, just as long as the “laws”’ are safe we’ll all be fine.

“Remove guns, reduce deaths”  The CDC doesn’t seem to think so, but if a bunch of soccer moms and dads say it loudly, it must be true.

And on they go.  Because I guess nothing protects defenseless children like a bunch of melodramatic slogans.

I think we can thank the self-esteem curriculum peddled in public schools for much of this battle. It has created an epidemic of megalomaniacs, educated by the system, who have absolutely no firearm experience — let alone any practical evidence to support their opinions — but who feel perfectly qualified to tell the rest of us that an armed teacher has no business protecting our children at school.  These people simply shrug off the obvious dangers inherent to their gun-less vision and focus instead on how this all makes them feel. Worse, they invent baseless, hypothetical scenarios where more guns lead to more deaths or more crimes while these fairy tales run diametrically opposite to the existing empirical evidence showing a steady decrease in crime as firearm sales continue to explode.  But perhaps worst of all, they ignore the fact that mass murderers are attracted to these free-fire zones — something that, for a sane human being, is absolutely, positively impossible to ignore.

If more mass murderers were still alive (they usually die after other people with guns show up, either by their own hand or by the hand of the police/legal gun owners) we could demand answers from these monsters as to why they preyed on soft targets instead of local shooting ranges or police departments. But do we really to do that?  Rational people (or just about anyone who attended school 60 years ago) already know the answer. Unarmed six and seven year olds, like those in Newtown make far less risky targets for cowards.

Arming teachers is not sure-fire protection against killers. But in terms of realistic self-defense the simple arithmetic suggests it is our best option. More guns in the hands of mentally stable and law abiding citizens reduces crime. An armed teacher acting from an entrenched position inside a classroom spells far better protection than the “deep thoughts” emanating from that “Guns Don’t Belong in Schools” poster or a bullet riddled corpse holding a little red Sharpie.