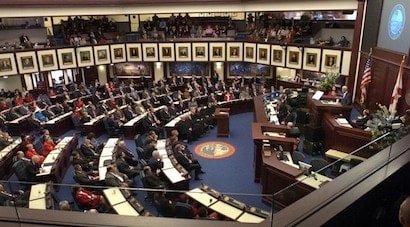 The Florida Legislature knows how to party.

The Florida legislature will not be holding a special session on the state’s controversial ‘Stand Your Ground’ law, after lawmakers overwhelmingly rejected the request to review the self-defense law on Tuesday.

It wasn’t even close. Opponents of SYG, those who petitioned for a special session, needed 96 lawmakers to agree that an extensive examination of the law was warranted. They came up woefully short.

The vote was 108 lawmakers opposing the special session, while 47 voted in favor of it. Four lawmakers did not vote, as CNN reported.

Unsurprisingly, the vote happened mostly along party lines, with only seven House Democrats voting against the special session.

In a statement released by his office, Senate President Don Gaetz (R-4th) explained the conditions under which a special session should be held, noting that a review of SYG does not meet those requirements.

“The president believes that as a practical matter, a special session is called when there is a consensus or at least a strong majority of legislators who agree that an emergent problem exists which cannot wait until the regular session and further who agree on at least the broad outlines of a solution,” spokeswoman Katie Betta stated.

“As it relates to changes to the “Stand Your Ground” provision of Florida’s self-defense laws, President Gaetz sees no such consensus favoring change.”

Florida House Speaker WIll Weatherford (R-Wesley Chapel) was more succinct, stating via his spokeswoman Kirsten McDonald, “Earlier this week, Republican and Democratic legislators came together to oppose a special session on this matter.”

Obviously, this decision was a huge blow to opponents of SYG, which removes one’s duty to retreat and permits one to use force, including deadly force, in a public place if one reasonably believes his/her life is in danger.

Sen. Geraldine Thompson (D-Orlando), who helped to spearhead the effort to file a request for a special session, claimed more lawmakers would be in favor of reviewing the law if leadership in the House and Senate signaled an interest.

“We are calling on them to have the opportunity to call a special session. If they fail to do that then they fail to lead,” Thompson said just prior to the vote. “We need leadership on this issue.”

Though, one could argue that Thompson had to know it was an uphill battle given where state leaders fall on the issue. Gov. Rick Scott is a Republican who voiced support for the law, as it is currently written. Likewise, both Senate President Gaetz and House Speaker Weatherford embrace SYG.

Moreover, the Florida Sheriffs Association voted unanimously to support the law “as is.” Not to mention the fact that Gov. Rick Scott already had a special, 19-member, bipartisan task force examine the law last fall. The task force essentially confirmed what’s already been stated: the law is fine as is.

Finally, the majority of American voters support SYG, with 53 percent backing the law and 40 percent opposing the law, according to a Quinnipiac University poll.

Nevertheless, Thompson believes that by not addressing and subsequently changing SYG people of color are going to feel uneasy when they visit the Sunshine State.

“Many groups, particularly groups of color that are scheduled to visit this area are indicating that they do not feel safe in the state of Florida,” Thompson told The Orlando Sentinel. “They indicated they do not feel safe because we have a law on the books that allows people to shoot first and ask questions later. It encourages vigilantism.”