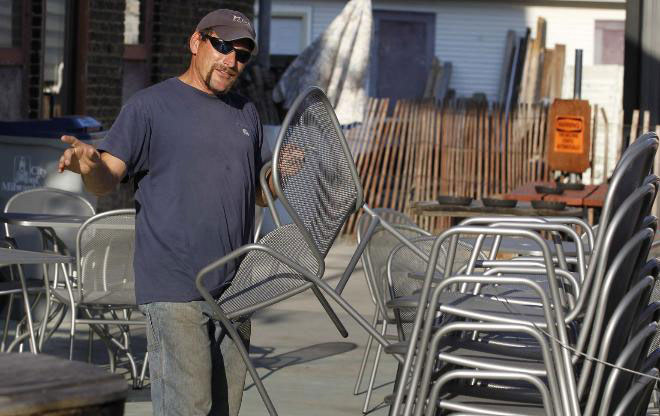 Other than a couple of camera crews and Kochanski receiving frequent hugs from patrons, it was business as usual the following day, with no indication that a man had been shot and killed the night before. (Photo credit: The Journal-Sentinel)

One man is dead after he and two others attempted to rob a Milwaukee bar Thursday night.

The trio, who were later found to be carrying BB guns, quickly discovered that the owner of the bar was packing a much bigger punch than they were when he pulled a gun from behind the bar.

Two customers were still in Kochanski’s Concertina Beer Hall Thursday night when the three would-be robbers came in brandishing guns. But the owner, Andy Kochanski, wasn’t ready to let his hard earned money go quite so easily. He fired at the three men, striking one and sending the other two running.

But despite the fact that the man he had just shot had threatened both his life and his business, Kochanski — a former firefighter — still came to the man’s aid, performing CPR and attempting to save his life before officers arrived.

The man, later identified as 23-year-old Carmelo Matoz-Arzola , died at the scene of a single gunshot wound.

In addition, one of the other two suspects was later found and arrested.

Kochanski has no regrets about the actions that he took.

“I did what I had to do to protect myself and my customers,” Kochanski told reporters. “Two guys with guns … what are you going to do? You are going to protect yourself and your customers.”

And the overwhelming majority of his patrons — both old and new — support his decision as well. In fact, when Kochanski re-opened for business as usual the next day, he announced on his Facebook page that as thanks for the support he was shown, the Friday night show was on him.

Following the incident, officers discovered that the suspects were armed with BB guns, but Kochanski said they looked real enough to him.

“When a situation like that takes place you don’t get time to analyze or think,” Doc Pfaff, a regular customer who showed his support by coming by the day after the shooting, said.

And Pfaff is no stranger to being the victim of an armed robbery – in fact, neither is Kochanski. He experienced a similar robbery attempt in his bar back in 2008 when two men, armed with a sawed off shotgun and wearing masks, came into the establishment. As he ducked and reached under the bar for his Glock .45, he heard bullets fly by followed by the shattering of whiskey bottles and the bar mirror.

Pfaff was a customer at the bar and was caught in the crossfire. The non-life threating shot shattered some bone in his hip. He doesn’t know whose bullet hit him and neither does he care, but he credits Kochanski as being a hero who saved his customer’s lives, much the same as his current patrons.

The DA will not file any charges against Kochanski, whose actions “were lawfully permissible in defense of himself and others.”

Kochanski hopes the incident will not have a negative impact on his establishment, which is described as “special … not a typical bar,” a fun, safe place, where people come with their kids. But if the show of support is any indication of future business, Kochanski should do just fine.