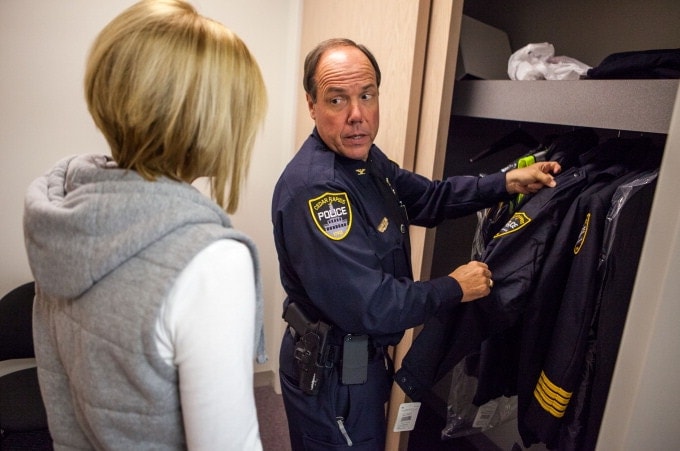 A whopping 30 people showed up at a gun control rally in Cedar Rapids, Iowa, on Wednesday.  The ‘Gun Violence Prevention Rally,’ as the event is officially dubbed, was sponsored by Organizing for Action, Obama’s nonprofit organization that works to mobilize the masses behind the president’s agenda.

For the record, 30 people is a lot compared to the three spectators who showed up at a similar event in San Bernardino, California, last June.

In any event, the folks that gathered on Mays Island, across from the Linn County Courthouse, witnessed a handful of speakers talk about the need for the Cedar Rapids community to become more politically engaged, to put pressure on local, state, and federal lawmakers to pass tougher gun laws, including bans on so-called ‘assault weapons’ and ‘high-capacity magazines’ and support for universal background checks.

“We want to raise awareness in Cedar Rapids … gun violence is a real issue,” said Cate Barker, one of the event’s organizers.

“As long as our gun laws are as lax as they are, we all live in Newtown,” Barker continued, referencing the mass shooting at Sandy Hook Elementary School in Newtown, Connecticut, where 20 children and six adults were slain.

Also speaking at the event was Cedar Rapids Police Chief Wayne Jerman, who told the crowd that curbing gun violence has been his primary focus since he became chief in the Fall of 2012.

“My number one priority was to address the gun violence in Cedar Rapids,” said Jerman, noting that under his reign he’s reduced gun violence by 20 percent, in part, because his officers have taken 55 guns off the streets as of July 31.

There have been 28 reported shootings in 2013 thus far, that’s down from 35 during the same time period in 2012, as the Iowa Gazette reported.

For Jerman, that’s still “way too many.”

“We need to do something, maintaining the status quo is not acceptable,” he explained.

Of course, by “something,” he really means more gun control, more laws that infringe upon the Second Amendment rights of law-abiding gun owners, i.e., the aforementioned bans on commonly-owned, semiautomatic sporting rifles and magazines that hold more than 10 rounds.

Though, he also stated that he wished he had more money to expand the department’s gun buyback program, which relies mainly on donations from the public to fund the program.  Currently, the department has only raised about $1,000 — not sufficient, according to Jerman.

Taking firearms and firearm-related accessories away from law-abiding citizens is not going to reduce gun-related violence.

If Jerman really wants to curb crime, he needs to redouble efforts that target criminals.  For example, in his speech, he touted the recent success of the FBI’s Safe Streets Task Force, which works in conjunction with local law enforcement to specifically focus on violent gangs, crimes of violence, and the apprehension of violent fugitives.

In recent months, this federal task force has indicted at least 10 people in the Cedar Rapids area on federal weapons charges, according to Jerman.  To state the obvious, this seems to be working.  Therefore, why not double down on this strategy?  Instead of asking lawmakers to pass tougher gun laws that will do nothing to take criminals off the streets, why not ask them to provide more resources so the department can expand the task force?

This would go a long way to help improving public safety.  More importantly, it wouldn’t infringe upon a law-abiding citizen’s constitutional right to keep and bear arms.