I applaud UMES’s decision to put bulletproof whiteboards in their classrooms.  And the Rocori School District in Minnesota, before them.  It is a great first step.  They ordered 200 of the whiteboards.  If professors have enough advance notice, the boards will offer a reliable means to defend against potential threats.  But this is only the beginning of the necessary preparations.

The Hardwire Bulletproof Whiteboard is 18″ by 20″.  It weighs less than four pounds, and is, of course, a useful whiteboard.  On the back, three hefty handles allow for the user to hold the board with one hand, or two.  The boards, which are available in white, pink, green, and blue, sell for $299. 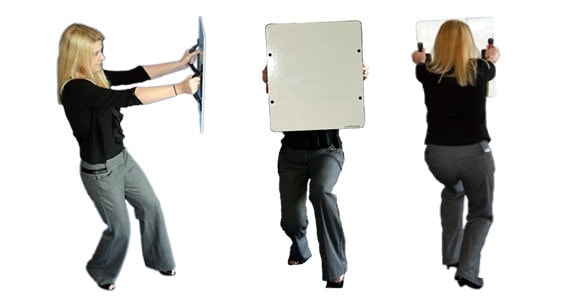 The board covers this teachers head and torso.

The board offers NIJ Class IIIA armor protection.  That means it should stop handgun rounds up to .44 magnum.  When body armor takes a hit, it must keep the bullet from penetrating and absorb some of the force as well.

That transfer of force is of less concern with a shield, as it is held off of the body.

Looking at the video footage of the board in actual testing, the boards don’t seem to fulcrum excessively.  One danger is that the bullet will hit with enough force to torque the board out of a teacher’s hands.  But that doesn’t seem to happen, due in no small part to the really solid handles. 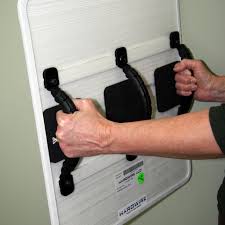 The backside of the board.

And the boards themselves deform to absorb the impact.  The incoming round bends the plate inside which, ideally, catches the round.  This deformation helps prevent ricochets.  Still, all of that force has to go somewhere, but the force would be much more manageable than the impact of the bullet.

The danger posed by bulletproof whiteboards

The real risk associated with the shields is the perception of safety.  I’m a college professor.  I’ve never encountered a school shooter, or had a need for anything bulletproof.  But I would feel safer knowing there was something I could pick up that would stop a bullet.

But bulletproof whiteboards, vests, backpacks, whatever, they only ever offer a minimal amount of protection.  If a shooter has multiple rounds at his disposal, the teacher behind the white board is in trouble.  The testing shows trained shooters who are intentionally shooting the board.  At the middle of the board.  But a shooter who wants to kill isn’t going to empty his magazine into a white board.

From my perspective, a shield without a sword is useless.  In the video above, police are demonstrating the capabilities of whiteboard.  They have pepper-spray, batons, knives, and more than one gun.  Each.  It makes sense for them to pick up a shield.

But teachers?  Professors?  The best cased scenario has an unarmed teacher  with a whiteboard facing an armed intruder.  Maybe the shooter will run out of ammo.  Hopefully he hasn’t brought a rifle. 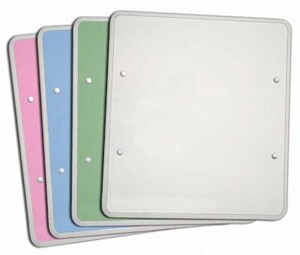 Still, it is something

Most schools are doing very little to protect students and teachers.  Some administrators make plans.  Others put up signs.  Even those that put locks on the doors aren’t safe, as the idiot in Atlanta proved earlier this week.  What I hear most often at my school is the “yes, but…. That can’t happen here.”

More schools should follow UMES’s example and put these boards in the classrooms.  Every school should.  It is a drop in the bucket of preparedness, but it is a drop.  I’d like to have one in my classroom.

But more most be done to secure our schools.  We need trained professionals in our schools.  Teachers should be trained in self defense.  It will do very little good to cower behind a whiteboard.  And if I’m going to carry a shield, I better get a sword to go with it.