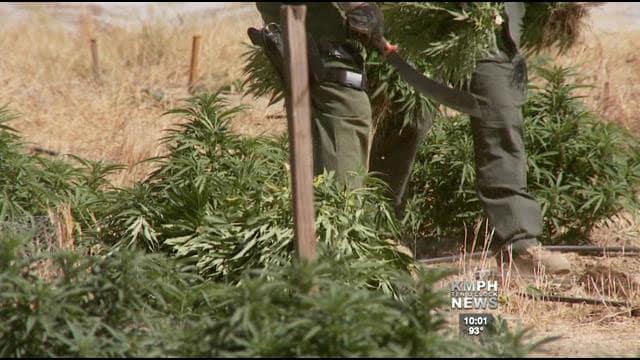 Griffith says it was thanks to KMPH airing his story that deputies came in a cleared the pot fields. (Photo credit: KMPH)

An incident in California’s Fresno Valley has left one family opting to stay in a nearby hotel rather than staying in the comfort of their own home.

According to homeowner, Brian Griffith, his neighbors, who he says are also pot farmers, showed up at his house Monday night and shot at him and his family. And once officers left, the men returned to threaten Griffith again.

Griffith said that three armed men came onto his property threatening and taunting him. With a pregnant wife and a small child to protect, he went inside and grabbed the only protection he had – a pellet gun.

He fired at the trespassers with his pellet gun, but they fired back, with bigger and more lethal guns.

“I tell my wife go call 911 right now,” Griffith told reporters. “As she leaves, it clicks on the security light. They think we all left. My daughter and I are waiting. She sees someone reach over and try to turn off the light. I fired at them with my pellet gun, that’s all I had. Then four shots came back at me. Two of them hit the tree behind me. I had to put my baby in the bed of the truck, as she’s ducking. What am I supposed to do?”

Deputies came to Griffith’s property to investigate and found a squatter, living near the marijuana grove next door. Although police did not state whether the squatter was believed to be one of the trespassers.

And according to Griffith, once deputies left, things got worse and the threats continued. “Sheriff’s gone. Hope you guys sleep good,” is what they heard coming from next door.

However, according to a Fresno County Sheriff’s Deputy Chris Curtis, “Griffith told deputies he saw one of the men with a gun. However, he never said a shooting took place.”

Griffith says his home in Squaw Valley – which some residents say is coming to be known as “Weed Valley” – is surrounded by four different marijuana groves, and altogether about 70 pot farms are in the area. Residents state that the increase in marijuana groves has caused an increase in violence and shootings such as these.

“There’s a big grow right next to us and we hear gunfire at night, sometimes at 3 o’clock in the morning,” one nearby resident, who wished to remain anonymous, said.

Following the incident with Griffith, deputies returned to an area near his property and eradicated several marijuana fields, with expectations to wipe out more in coming days.

Griffith says they are planning to sell their property and move away. “How am I going to go back and lay my head down, when less than 100 yards away is someone who tried to kill me last night,” he said.