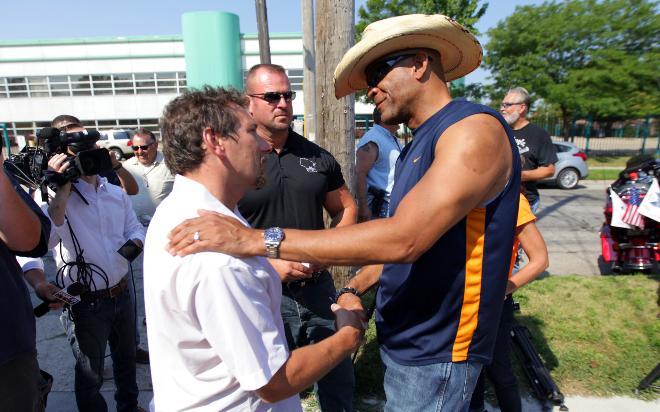 Milwaukee County Sheriff David A. Clarke Jr. told a gathering of about 100 people on Sunday that citizens who use their firearms in self-defense should have their guns returned to them within 48 hours of being cleared of criminal charges.

Clarke was a guest speaker at a free concealed-carry class held at Kochanski’s Concertina Beer Hall, located on the city’s south side, an establishment that made headlines last week after the owner of the tavern, Andy Kochanski, fatally shot a would-be robber.

While prosecutors have cleared Kochanski of criminal charges and agree that he acted lawfully in defense of himself and the patrons at the bar, the firearm he used to kill the suspect, 23-year-old Carmelo Matoz-Arzola, a Glock .45, had not been given back to him.

Before a packed house, the three-time elected Sheriff said that he is going to put pressure on legislators to enact a law that ensures firearms used in self-defense situations are returned quickly to their law-abiding owners.

“They’re taking his freedom away to possibly have to act again tonight,” said Clarke, as reported by the Milwaukee Journal Sentinel. “If Andy would have reached for the phone instead of his firearm, we might have been out here today for a memorial service for Andy.”

Clarke praised Kochanski for his bravery and told those in attendance to get the training they need to become responsible concealed-carry permit holders because one day they may find themselves in a life-threatening situation where they have to respond as Kochanski did.

“It’s not easy to do what he did, to point a firearm at another human being and pull the trigger. It’s not innate in most human beings, especially law-abiding,” Clarke said. “But when you have to do it, I hope you have the courage and conviction to say, ‘I have to do this …’

“You don’t have a choice, you have a duty to protect yourself and your family.”

Clarke is a bit of a celebrity within the firearms community. In June he was awarded ‘Sheriff of the Year’ by the Constitutional Sheriff’s and Peace Officers Association for his vocal support of the Second Amendment in the aftermath of the mass shooting at Sandy Hook Elementary School in Newtown, Connecticut.

In January, Clarke released radio ads calling on citizens to take responsibility for their own safety. The radio ad read, in part:

With officers laid off and furloughed, simply calling 911 and waiting is no longer your best option.

You can beg for mercy from a violent criminal, hide under the bed, or you can fight back. But are you prepared?

Consider taking a certified safety course in handling a firearm so you can defend yourself until we get there. You have a duty to protect yourself and your family. We’re partners now. Can I count on you?

One could argue that by releasing those radio ads, debating anti-gun zealot and CNN host Piers Morgan on national TV and pushing for the prompt return of Kochanski’s handgun, Clarke is walking the walk when it comes to Second Amendment advocacy. By all accounts it appears he’s the real deal, a true patriot. Let’s us hope now that he makes real headway in getting legislators to consider enacting a law that will return, ASAP, firearms to law-abiding citizens who use them in self-defense.