Ever wondered if Patton really did shoot down a German plane with his pistol? Does the gun always beat the blade? Or how Buffalo Bill shot so well? Well the answers to these and other gun mysteries are explained here.

The old adage is that you never bring a knife to a gunfight, but what if it’s a big knife? Like as big as a Scottish claymore sword? 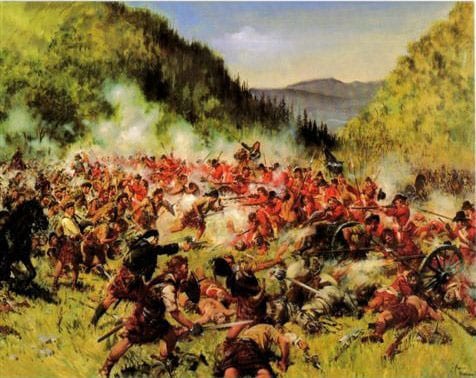 The Battle of Killiecrankie. The blue uniformed Jacobites are charging the redcoats armed with muskets and cannons.

These huge two-handed weapons were popular in Scotland for more than three hundred years. Over five feet long and sometimes as heavy as 23-pounds, these brutal blades were king of the Highlander’s battle weapons for centuries and at one time this even held true when facing firearms. In the 1689 battle of Killiecrankie, some 3000 Jacobite Royalists armed with traditional swords and dirks (a small dagger) met over 4000 Government troops armed with muskets. Seems open and shut who won right? Well the sword-armed Highlanders rushed the Government’s lines and, working with naked blades, nearly wiped out their better-armed opponents.

Today many professional soldiers who know the deal still carry blades into battle and use them. In a famous instance, Silver Star winner David Bellavia started a fight with a machinegun against a house full of insurgents and ended with the use of a Gerber Gator.

It’s April 1943 and there is a meeting in Italy between a group of US generals. On one side is George S Patton, commander of a US Army operating in Italy against the Germans. On the other, British RAF Air Chief Marshall Sir Arthur Tedder and US Army Air force Lt Gen Carl Spaatz. The two air force officers confidently declare that the US/British forces have achieved air superiority in the area and Patton’s ground troops have nothing to fear from Hitler’s pilots. Just then, a group of German fighter planes makes a strafing run down the very street in which the meeting is being held.

In the 1970 film Patton, this meeting is dramatized complete with the fearless blood and guts general bailing out of the meeting, then firing his Colt semi-auto up at the attacking aircraft. While it is a well-known and verified fact that General Patton did engage in a close in gunfight in a Mexican hacienda with genuine outlaws in 1916, it seems that the airplane story is pure Hollywood. The meeting did happen, as did the German attack, but no mention is made outside the film of Patton ever going mano-a-avion with a pair of German Heinkels.

Even though we want the 1943 story above to be true, there is an earlier Patton pistolero account that has been verified. In 1912, 26-year old Lieutenant Patton was part of the US Olympic team. Competing in Stockholm against 32 athletes from ten nations, Patton took part in the Modern Pentathlon. This sport, involving swimming, fencing, horse riding, athletics, and shooting, was a natural fit for military men of the age.  Patton beat all of the competitors from Russia, Germany, France, and Britain, but in turn only finished in fifth place behind four Swedish supermen. This was largely because he finished 20th in the shooting event.

Patton at the Stockholm Olympics.

But hold on there: the reason Patton finished so low in shooting was because he used the then-current issue US Army .38-caliber revolver whereas the four Swedes used .22 pistols. Patton maintained that he shot through his own larger holes and the judges counted those rounds as misses. Had his target been correctly counted, he would have garnered an Olympic medal. In a November 1945 informal rematch in the Stockholm Olympic Stadium against eight of the former competitors, Patton outshot George Laval, the winner of the 1912 event and at least proved a point.

4.  Uncanny marksmanship of the Old West 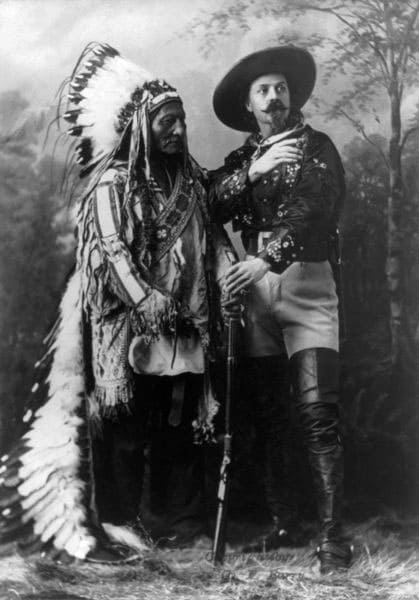 Exhibition shooters of the late 19th century were steady entertainment. Such greats as Annie Oakley, Dr. A. H. Ruth, and Ad Toepperwein toured the country and shot thousands of glass balls, clay pipes, steel plates, and wooden blocks to the joy of the awed masses. To young children these feats of marksmanship were almost indistinguishable from magic. Men shrugged and confidently assured their wives—very quietly—that they were just as good a shot as the entertainer was.

The thing was, many showmen of the time used special gallery ammunition that, one way or another, gave them an edge when shooting. Buffalo Bill Cody, an expert sharpshooter who took thousands of buffalo on the plains, preferred a custom load of 20-grains of black powder under a quarter-ounce of chilled bird shot in his .44-40 caliber Winchester 1873 rifles. These shot shells were mainly used so that the shooter wouldn’t send wild projectiles cascading out into town and into innocents two blocks over, but they also contributed greatly in point-shooting marksmanship with rifles and pistols.

Popularized in the film The Deer Hunter, the foolhardy exercise that is Russian roulette is one of the stupidest things anybody can do with a firearm. In a nutshell, this “game” uses a revolver loaded randomly with one cartridge.  The cylinder of the weapons is spun and the gun passed from player to player, who each place the gun to their head and pull the trigger until the inevitable result. 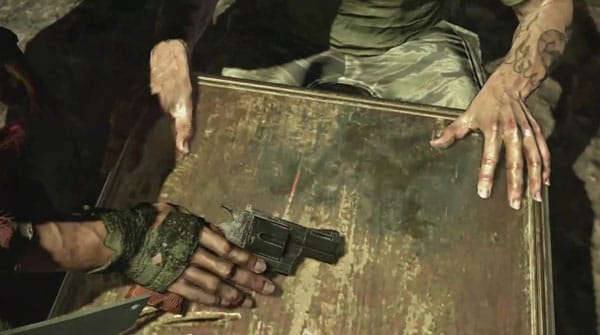 This practice however, may have just sprung from the minds of Hollywood screenwriters rather than in Russia.  The first mention of the game itself comes from a Swiss-born pulp fiction writer living in the US in 1937. That’s not to say the Russians haven’t thought up moronic things to do with weapons.  Tsarist officers are credited with inventing a drinking game called cuckoo in which drunken soldiers would turn off the lights and fire randomly into the room at other officers who ran for cover, yelling cuckoo. That’s almost as stupid as playing Russian roulette with a semi-auto but, hey, it happened in 2000 in Texas, garnering the dimwitted player his very own mention in the Darwin Awards.

First used to replace columns of pikemen of the 17th century, the bayonet was a simple spike placed into the muzzle of an early musket and used as a rudimentary spear. These spikes soon moved to a bayonet lug on the side of the barrel, keeping the muzzle open to fire.  These were carried by soldiers in the field for over 400 years and even today, in an age of unmanned drones, smart rifles and lasers, the bayonet is still in the toolbox of the infantrymen. 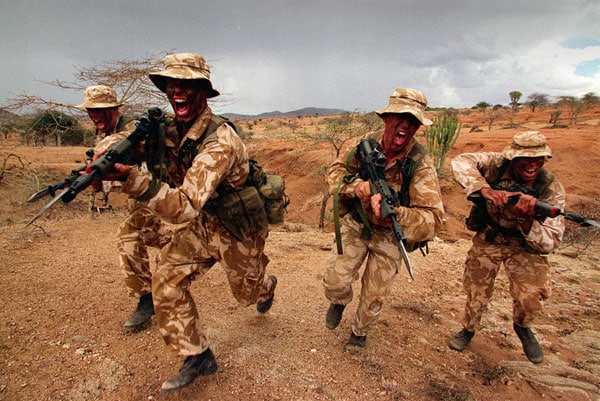 Even in our modern times, there are still moments when soldiers meet in close combat and the deciding factor is the bayonet.  As late as the Korean War the US Army had organized bayonet charges as they were often enough needed and in both Iraq and Afghanistan , the British Army has met desperate situations where the proper application of cold steel on the end of their rifles was the best course of action. 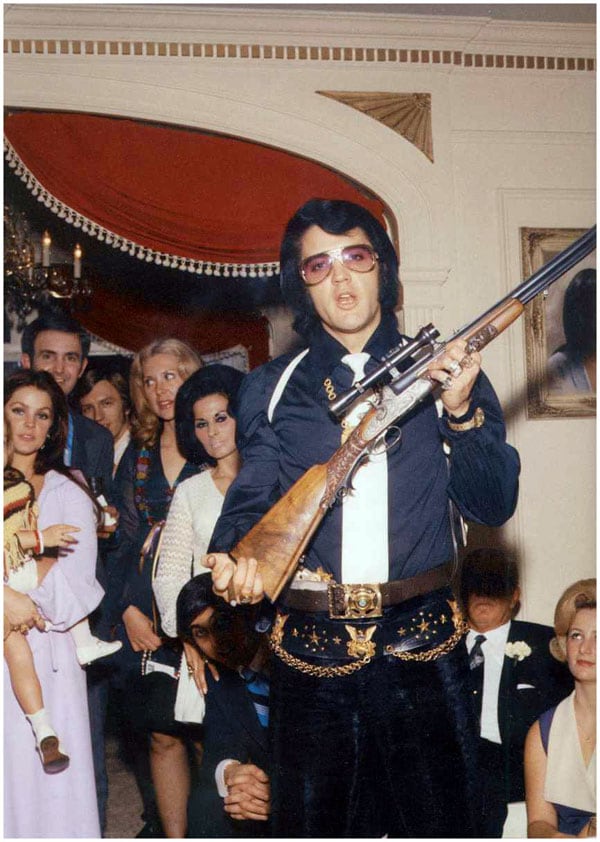 Elvis was something of a firearms collector and also a big fan of EDC.

While takin care of business one night, Elvis Presley, the Mississippi-born king of rock and roll, decided to take a load off and watch some television. It was then that none other than Robert Goulet popped up on the screen. For those not in the know, Presley and Goulet had a long-standing feud over a girl. You see, when Elvis was doing his time in the Army in West Germany (see “GI Blues” for more info), Goulet was pitching woo to the man’s girlfriend. Well, that never really sat to well and in 1974, some 25-years after the Goulet went Mack daddy on Elvis’s prior old lady, the two came face to face via television. An early fan of everyday carry (he once left a .45 behind in Tom Jones bathroom while going code brown), Elvis drew and fired a round into the screen.

So yes, while we can’t verify whether he was eating a peanut butter and banana sandwich at the time, we can assure you that the King did, in fact and on purpose, smoke one of his own television sets while it was on. The 25-inch RCA, complete with bullet hole in the lower right hand side of the picture tube, is currently on display in Graceland. Remember your firearms safety and do not try this at home kids. 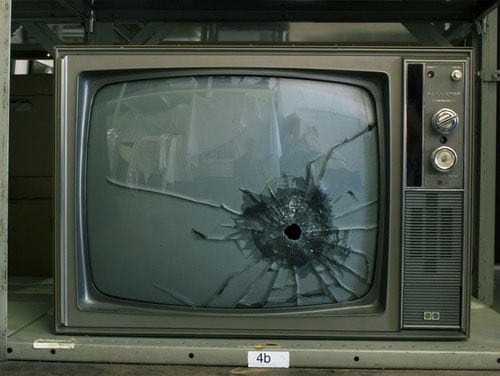 The King’s 25 inch 1974 RCA Television, now on display at Graceland.

Thank you, thank you very much.