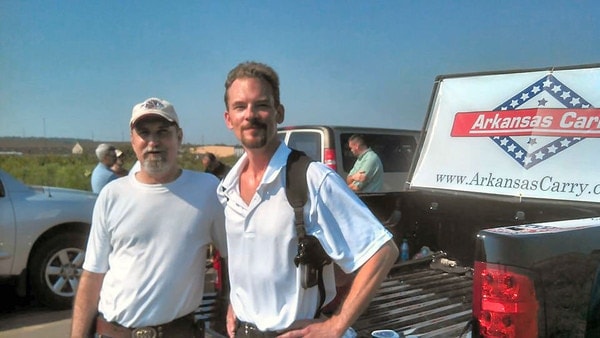 Chairman of Arkansas Carry Steve Jones, left, stands next to a man with a perfect tan.

A group of Second Amendment supporters gathered together Saturday morning in Fort Smith, Arkansas, for what they say wasn’t a protest but a celebration of the recently enacted – and highly debated – Act 746.

The group met at 9 a.m. and after a short pep talk from event organizer and chairman of Arkansas Carry, Steve Jones, the group, most of which were carrying holstered firearms, set off to walk down the streets of Fort Smith. The pep talk also included a quick rundown of the rules, common sense practices such as do not grip your firearm or remove it from the holster, instructing participants that if they wanted to compare their pieces, to do it elsewhere, not in public.

Jones told Guns.com that the enacting of Act 746 “makes open carry and concealed carry legal by removing the criminality of carrying a handgun for self-defense purposes. It now only specifically states a person must have criminal intent or be committing a crime before they can be arrested for carrying a handgun.”

However, the Arkansas Attorney General Dustin McDaniel disagreed in his opinion, which was released last month. And while the opinion focused on another element of the act – defining a journey – to discredit the idea of open carry in the state, that’s not the more debated section of the act.

The journey part of the act allows for carrying a firearm in a vehicle, without a license, when one is on a “journey,” which the act defined as “travel beyond the county in which a person lives.”

The second debated part of the act – which some say allows for open carry in the state – reads, “A person commits the offense of carrying a weapon if he or she possesses a handgun … for use with a purpose to attempt to unlawfully employ the handgun … against another person.”

Opinions are sharply split between interpretations of the new law, so the group set out on Saturday to both test it and attempt to prove that open carry is now legal in the state of Arkansas.

Of course, law enforcement, including the Fort Smith Police Department as well as State Troopers, were close at hand to ensure that everything remained peaceful and it did, just as expected.

Jones also instructed the group to let the police deal with any hecklers, although the group received quite the opposite reaction from passersby. 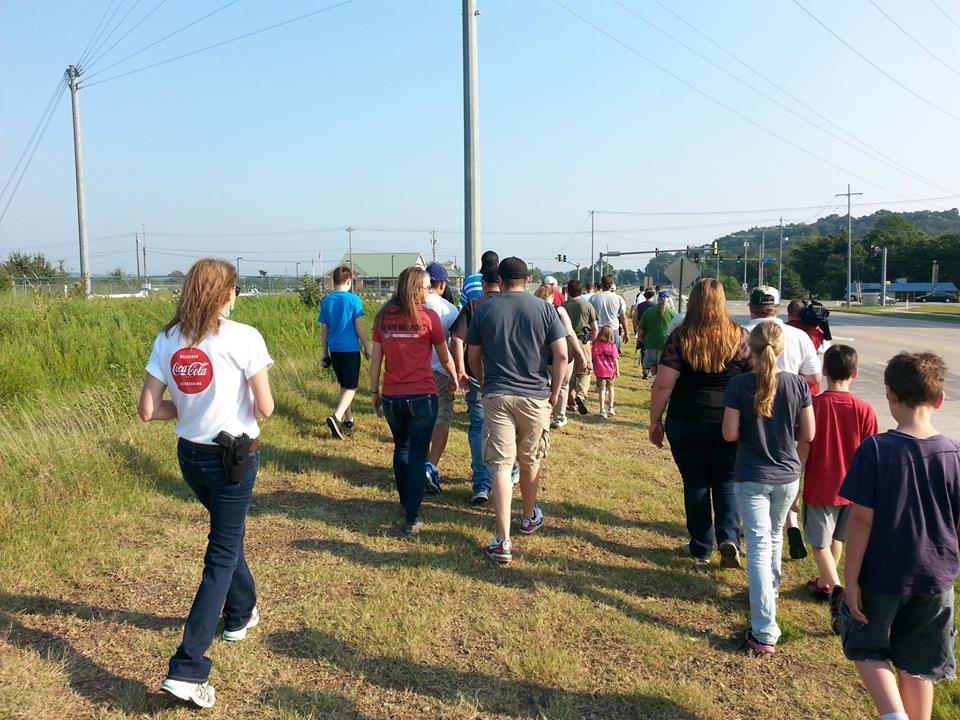 The group of demonstrators, comprised of men, women and children, walked along the road.

“We had some people actually drive down the road who saw people carrying guns like we were doing with an organized walk, and decided that they wanted to join us. And they parked, and they joined us,” Jones explained. “A lot of people did not know it was invite-only; they just showed up. They read about it and heard about it through media.”

In fact, the event was originally an invitation-only walk to be conducted by a few members of Arkansas Carry. However, as word spread, so did attendance and by the end of the walk, what started out as 16 Arkansas Carry members had grown to about 40 Second Amendment supporters, which included men, women and children, young and old, from all walks of life.

Jones added that most people driving by were honking and waving to show their support for the group’s efforts. The Fort Smith Police Department also confirmed that they did not receive any calls from concerned citizens either.

The walk was considered to be a success for a few reasons. First, it helped to show that not everyone with a gun is a bad guy and that most gun owners are responsible people.

“I think that anybody who observed the walk would see that everyone walked as if they had a tool at their side, and one that you never pull out until you need it,” Jones said.

Additionally, the walk seemed to validate that “open carry is legal in Arkansas,” Jones said.

Arkansas Carry said that although they plan to have future walks in other areas of the state, there is nothing else currently planned.

No shots were fired, no injuries were reported and no one was arrested during the walk, which consisted of three miles.

The Arkansas Attorney General has not yet commented concerning Saturday’s open carry walk.