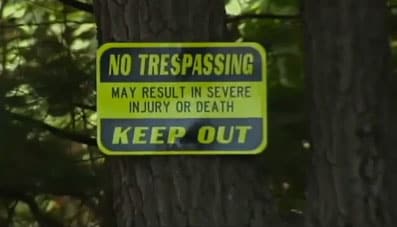 The family and friends of an 18-year-old boy are grieving after he was shot and killed by a nearby neighbor Saturday evening. The teen had broken into a rural home in East Brunswick, Pennsylvania, and following a physical confrontation with the homeowner was shot.

Curt Stein and Melissa Booth returned to their secluded log cabin in Schuylkill County about 5:30 on Saturday night and said they immediately knew that something was not right.

“The inside of the house looked different, as if somebody may have been in the house,” State Police Trooper David Boehm told reporters during a phone interview.

The couple was surprised to find the teen boy inside their home. And according to Boehm, when confronted, the teen and Stein got into a physical altercation. However, Stein was armed and fired several shots, fatally striking the boy, who was later identified as Zachary Foster, a nearby neighbor. He was pronounced dead at the scene.

Officers discovered that Foster had broken into the home through the back basement door, which had been either kicked in or forced open in some way.

Although Foster lived down the road and the couple’s mailbox is lined up right next to the Foster family’s, authorities said that it’s unclear whether the couple was acquainted with the teen.

The couple had returned to their home on Sunday, but offered no comment on the home invasion and subsequent shooting of the teen. At the Foster home, friends and family could be seen hugging each other and comforting one another.

“We’ll submit our report to the Schuylkill County District Attorney then they will look at the report and then, based on law, decide if the homeowner was justified in using deadly force,” Boehm explained.

“A homeowner has the right to protect his house and his property,” he added. “And if it gets to the point where he’s in fear of death or serious bodily injury then he can use deadly force.”

Stein received minor injuries from the scuffle with Foster, and it is unknown whether Foster was armed.

At the end of Stein’s long driveway and at the edge of his property, a clearly visible sign reads, “No Trespassing. May Result in Severe Injury or Death. Keep Out.”