School children in Chicago were guarded by a slew of security guards, police and fire as they made their way through the gang-ridden streets to their first day of school. 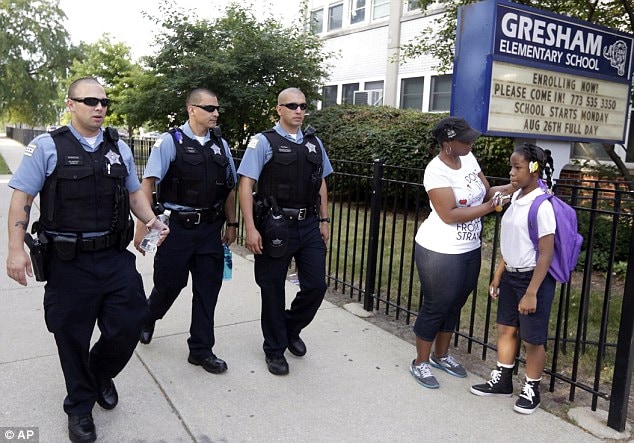 Police roamed the streets and escorted children across gang boundaries on their first day of school.

A fire truck was parked and idling nearby, ready to respond to a medical emergency at a moments notice. Nearly 1200 unarmed workers took post and kept vigilant watch for any signs of danger. Police roamed the streets, and also the air as a helicopter hovered above.

All this and more took place in what is known as “Safe Passage,” Chicago’s program that was instated in 2009 after the beating death of 16-year-old student, Derrion Albert, after he left his South Side high school one afternoon.

But some parents did feel the safety measures were enough.

“It’s still really too dangerous,” said Larissa Henderson, mother to her 4-year-old son, as she walked him to his first day of school.

After Chicago leaders announced they planned to close down 47 elementary schools this coming Fall, parents became worried. The children would be dispersed amongst the remaining, open schools and many parents are concerned this displacement would force them to walk further distances across crime-ridden streets and warring gang neighborhoods. 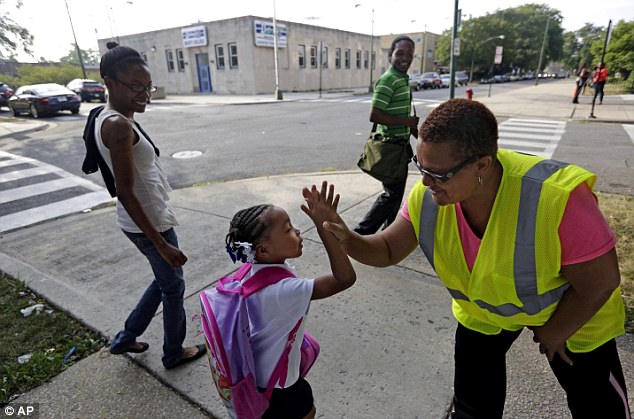 Over 1,200 trained workers took post to keep vigilant watch over the kids.

City employees also took part in paving a safe way for the school children. Before the first day of school, city workers demolished 41 vacant buildings along the routes, trimmed 4,900 trees, removed 2,800 instances of graffiti and fixed hundreds of streetlights.

“The ultimate goal of all efforts – both in the building, on the way to the building and at home – is so kids will think about their studies, not their safety,” Mayor Rahm Emanuel, who spend much of the morning walking along the “Safe Passage” routes. “The city is diverse. This isn’t everywhere. But it does address certain parts of the city and certain communities so every child has a level playing field.”