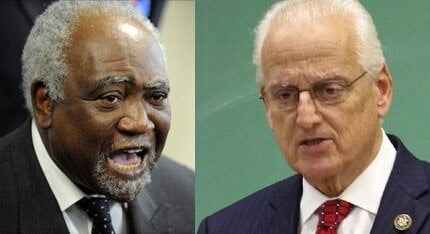 As a way to prevent and reduce gun violence, two House Democrats have proposed a bill that would drastically raise taxes on handguns and ammunition.

Last week, Reps. William Pascrell (D-NJ) and Danny Davis (D-Ill) introduced the “Gun Violence Prevention and Safe Communities Act,” which would increase federal excise taxes on handguns from 11 percent to 20 percent and on ammo from 11 percent to 50 percent.

For Pascrell, the tax hike on firearms and ammo is long overdue.

“The tax on handguns was last increased in 1955,” he said at rally in Trenton, New Jersey. “Worse yet, the tax rate on ammunition and other types of firearms has remained the same since 1941.”

According to Pascrell, the tax increase should generate as much as $600 million in new revenue, money that could go toward violence prevention efforts, the enforcement of existing gun laws and gun violence research.

“All across our country, local police departments have had their budgets slashed and been forced to lay off officers, reducing their ability to protect our communities from the scourge of gun violence,” said Pascrell, co-chair of the House Law Enforcement Caucus and member of the Ways and Means Committee.

“This bill represents a major investment in the protection of our children and our communities, and reflects the long-term societal costs of gun and ammunition purchases in our country,” he continued.

Though critics of the bill — mainly, gun rights advocates — argue that this bill is nothing more than a way to prevent law-abiding citizens from exercising their right to keep and bear arms.

“What the anti-gun interests can’t ban, they want to tax it out of existence,” Alan Gottlieb, chairman for the Citizens Committee for the Right to Keep and Bear Arms, told Fox News. “It’s nothing more than confiscatory taxation.

“I doubt this bill will pass, but we will lobby against it if need be,” he added. “This is simply another shot against gun owners in this country.”

But Rep. Davis, the co-sponsor of the bill, rejects those arguments. He believes that the “Gun Violence Prevention and Safe Communities Act” is a reasonable solution to address gun-related violence.

“This legislation is a pro-active approach to reducing gun violence by using proven preventive programs which have been starved for funds until now,” Davis, who represents a portion of Chicago, explained.

“As part of a comprehensive, multidimensional strategy to reduce gun violence, this legislation closes major loopholes in tax law and lays out an equitable, long term, sustainable strategy to provide the requisite resources,” he added.