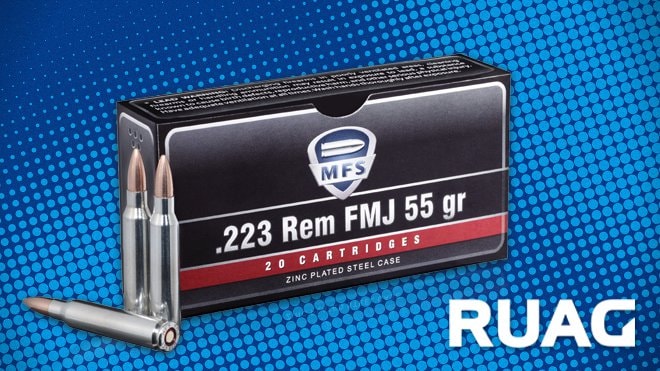 European Aerospace firm RUAG has announced that they will be investing in expanding their ammunition manufacturing capabilities. This is welcome news as the American appetite for ammo is draining supply lines globally.

RUAG Ammotec makes a variety of loads, mostly for common service calibers as they tend to be a military supplier. They make practice, target, defense, frangible and lead-free loads for several calibers from 9mm Parabellum  and .38 Special to .338 Lapua Magnum .50 BMG. They make non-corrosive nickel-plated steel-cased ammo that’s also growing in popularity with shooters on a budget.

The firm posted a statement to say that they’re sensitive to increasing needs of shooters everywhere and is ready to ramp up their facilities over the next three years to keep up with the new demand standard.

They have not ironed out all the details but plan to invest “double-digit millions” Euro for the expansion. “It is the biggest project of its kind in the history of RUAG Ammotec.”

“Expanding our production network across all our locations will ideally increase our current capacities,” said Cyril Kubelka, RUAG CEO. “This is the only way for us to be able to meet the high international demand even better in future and reinforce our market position.”

Shooters across the nation emptied store shelves of their ammunition earlier this year in the wake of calls for increased gun control. Manufacturers are having a hard time re-stocking them, although the pressure is backing off.

There are some manufacturers who are not increasing their manufacturing capacity to keep up with market demand as they perceive the market will return to previous demand levels following this particular bubble, however, many manufacturers taking advantage of the increased sales to expand.

Ammo manufacturing expansion stalled out a few years ago, but now, with new gun owners and shooting enthusiasts popping up every day, it’s safe to say that the market is expanding, and rapidly.

RUAG is responding to not just the increased demand for ammo in the U.S. but all Germany, Hungary, Sweden and Switzerland.

This follows the announcement of another Remington ammo plant in Lonoke, Ark. Remington has finalized much of the project and is already working on building the new facility, which is expected to cost about $32 million.

For more information about what ammo and brands of ammo RUAG makes, check out the RUAG USA website.

How’s the ammo situation going for you?