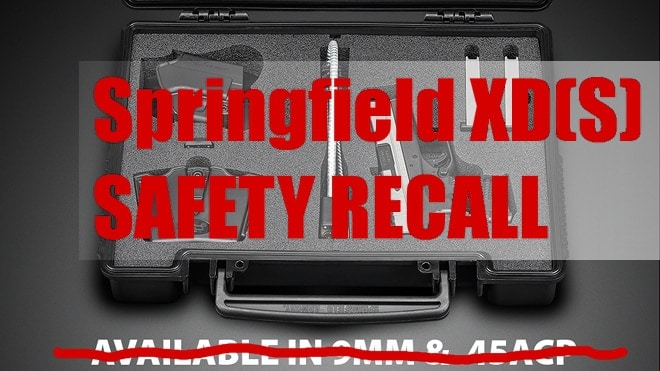 Springfield Armory has issued a limited recall on a run of their extremely popular XD-S concealed-carry pistols. The recall is for both 9mm and .45 ACP models of handguns.

This is a voluntary safety recall for a very rare problem that causes the gun to fire when chambering a round and may also cause pistols to double-fire. This is only for the new single-stack XD-S pistols, not the subcompact, compact, full-size or competition XD-M pistols.

Springfield is asking all users to verify if their XD-S pistol fall within the serial number range of potentially-affected handguns.

“We want to emphasize that no injuries have been reported to date,” explains Springfield on the recall information page. (The page is down at the time of writing, likely due to a traffic overload. That said, the page to get a shipping label is working fine.)

According to the press release, this safety recall applies only to:

If you cannot get access to Springfield’s recall website, call them at 800-680-6866 to arrange your safety upgrade.

This news just days after Smith & Wesson issued a safety notice to all M&P Shield pistols, which are similar single-stack concealed-carry pistols.

The Springfield XD-S is a redesigned version of the successful XD-M and XD series of service pistols. The XD-S pistols have been widely praised for their quality build, fit and finish, as well as for their “shootability.” Although they are small and light handguns, they’re easy to handle and shoot quickly and have solid, visible sights.

The guns’ all-around appeal mean that they’ve been flying off shelves, and there are many in circulation even though they have only recently been introduced.

If you one of these potentially-dangerous handguns, whether it’s a Springfield or a Smith & Wesson, please check to see if your gun is affected. And if you know anyone with an XD-S or M&P Shield, make sure they know that these guns are under safety alerts.

Although it’s not uncommon for gun companies to feel the pains of recall, it’s surprising that two of the most popular new guns for concealed-carry are having serious issues. This is a rough week for many people who carry guns on a regular basis.